The GoPro Hero 9 and the Insta360 One R are two of the most popular 360-degree cameras on the market. Both offer great features and performance, but which one is the best for you? In this article, we’ll compare the two cameras and help you decide which one is the right fit for your needs. 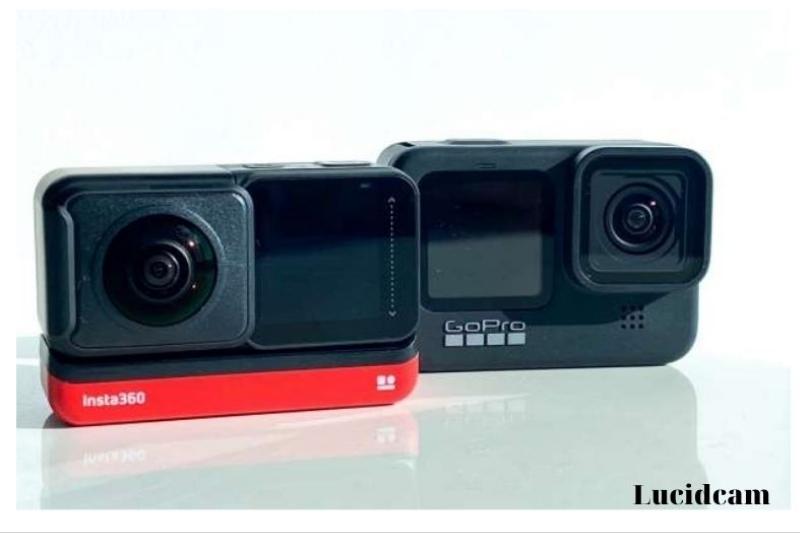 Both the Insta360 One R and GoPro Hero 9 are action cameras designed for fun. Both cameras are compact, waterproof, and feature mounts that can be used with many accessories. Two screens are featured on the Hero9, one at the rear and one in front. Although the One R has a single screen, the modular design of the camera lets you choose the orientation it faces.

The Hero9 does not require a case because the mount is built into it. However, the One R requires a case if you wish to use accessories.

You can take apart the One R modular camera to replace lenses or install a new battery. If you wish to replace a lens, it must be disassembled. This allows you to use the camera in a wider range of ways, but it can be cumbersome to constantly take it apart. The Hero9 is a simpler camera to use and has detachable lenses.

The Hero9 has a superior build quality. We also find the dual screens to be very useful. Although the One R has a case-free option, you will need to purchase an additional accessory.

The Insta360 One R actually has three cameras. This is the most noticeable difference between the cameras. You can swap out lenses to shoot different types of video because of the modular design. The One R can shoot 360 videos using its 360 Mod, normal linear video with 4K Mod, and high-quality video with the 1-Inch Mod.

The Hero 9 cannot shoot 360 videos. This may or may not be important to you. One R and the Hero9 are very similar when the One R uses the 4-K or 1-Inch Mod. The One R will allow you to pick the mods that you like, but you don’t have to buy them all. This review will compare the Hero9 to all mods on the Insta360 One R.

A detachable lens is also available on the Hero9, which could mean that other lenses will be made in the future. A-Max Lens, which offers ultra-wide angle video with enhanced stabilization and shooting modes, will soon be available.

Both cameras offer a variety of frame rates and resolution options. They also have advanced stabilization software that creates smooth videos. Each camera has a different lens and color technology that will affect the quality of the photos and video.

Both cameras are waterproof, can Livestream, and can also be used as webcams. While there are many similarities, there are important differences in design, video quality, and software.

The Insta360 One R modular device has three lenses or “mods” available. The 360 mod can shoot 360 videos in 5.7K. This allows you to point first and shoot later. The 360 mod allows you to be creative in the way that your video is edited. 360 video has the highest quality, but it is also more stable and will not miss a shot. Because everything is being recorded simultaneously, you don’t have to point your camera at one subject.

Because it only has one lens, the Hero 9 cannot shoot 360 videos. The Hero 9 can be purchased the Max Lens, which allows it to shoot ultra-wide angle video. This allows the Hero 9 the same excellent stabilization as a 360 camera.

The Hero9 can’t record 360 videos, so I won’t be too concerned about it. However, it is worth considering whether you would like to shoot in 360. We’ll be focusing on the One R’s 1-inch and 4K modifications.

The Hero 9’s main drawback is its small size, which is not different from other GoPro’s. A larger lens captures more light, color, and detail, which results in better video quality. 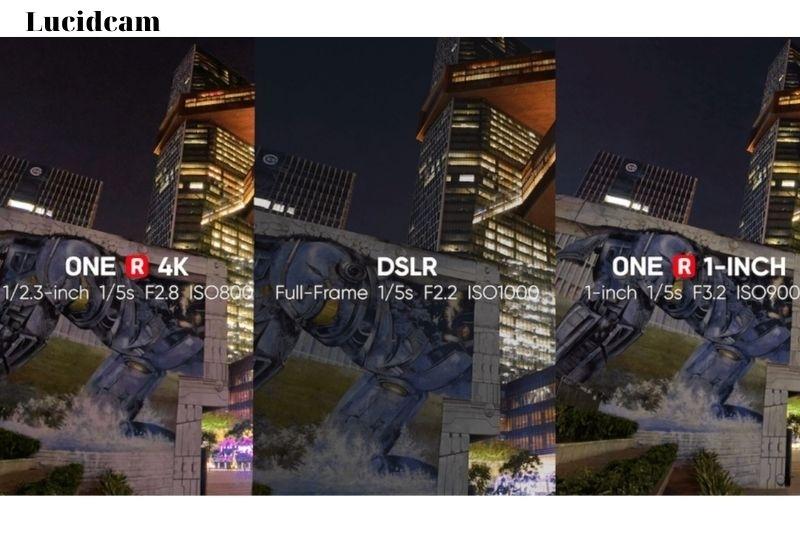 Insta360 One R 4K has a lens similar to the Hero 9. GoPro Hero9 is the clear winner in a direct comparison. Although the One R’s 4K mod does a good job, it cannot capture the vibrant colors of the Hero9. The 4K mod has more noise and a lower resolution, but it can still stabilize video just as well. Both cameras can capture slow-motion video at different frame rates, including the popular 4K @30fps.

Hero 9 faces greater challenges with the 1 Inch Mod. Leica’s 1-inch sensor is three times bigger than the Hero 9’s. The 1 Inch lens’ larger sensor allows it to perform better in low light conditions, where there will be less noise and more detail.

The 1 Inch Mod has a higher dynamic range, sharper video, and a higher maximum resolution of 5.2K. The difference in quality between the two sensors is not significant, with the Hero9 producing high-quality video under good lighting conditions despite having a larger sensor. This is especially evident when shooting indoors, at night, or in direct sunlight. The One R’s footage is sharper, but the GoPro footage is blurred. 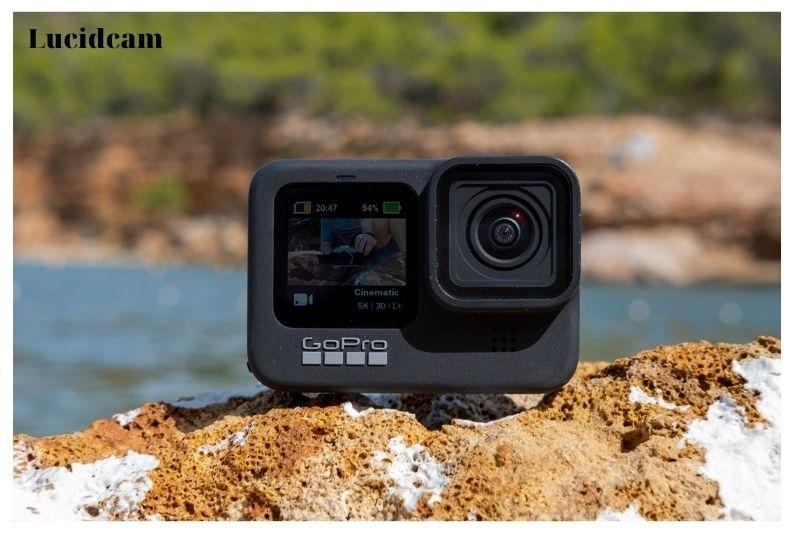 Insta360 and GoPro claim to have the best stabilization software on their cameras. They are very similar in that they achieve the same effect. Insa360 calls its software Flowstate, while GoPro’s software is Hypersmooth. Both use wide-angle lenses to ensure that moving footage is stable even in the most challenging conditions.

The best stabilization is achieved by using the 360 mod, and the Insta360 One R. 360 video contains the most information, and the camera can create almost perfect stabilization. You can also use GoPro Hero 9 with Max Lens Mod. This additional lens, which can be purchased separately, features [email protected] FOV. It allows you to make the best-stabilized video possible with a non-360 camera.

The Hero 9’s excellent stabilization is still available without the Max Lens Mod. You should be able to use the camera to shoot moving videos with excellent results. The GoPro Hero9 has the best stabilization of all action cameras.

Both the Insta360 One R 4K and 1 Inch Mod have excellent stabilization, making them great choices for action shots. Gopro Hero 9 has better stability than the One R4K and 1-Inch Mods, but it is still marginal. 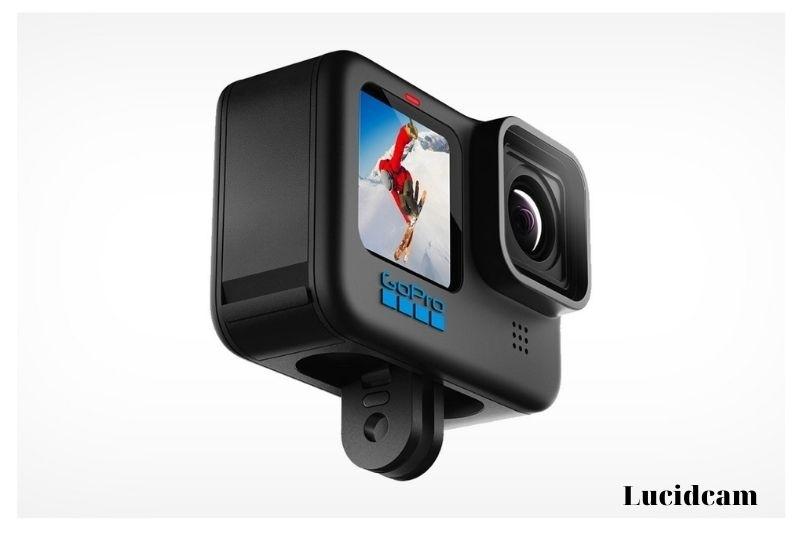 Another similar feature that both the One R and Hero 9 share is Timelapse/Hyperlapse. The unique time-lapse can be achieved with both cameras, but the One R editing software gives you more control over speed or duration. Hindsight, a video mode on the Hero9, records 30 seconds before you press the shutter. This is useful if you miss an important shot too often.

Both cameras can Livestream or be used as webcams. 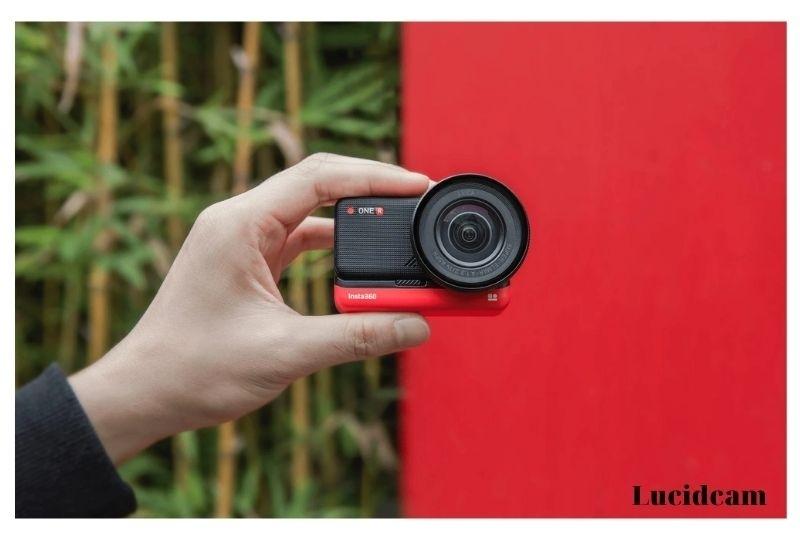 Although neither camera is specifically designed for photography, they each have a variety of photography-focused features. Both cameras feature a night mode that improves night photography. LiveBurst, a new feature on Hero9, records for 1.5 seconds to allow you to select the perfect shot.

The Hero 9’s photo resolution is 20MP, while the One R’s is 18MP. This gives Max an advantage in terms of image sharpness. Although the 1 Inch Mod is capable of capturing more light and detail, as well as creating high dynamic range images, I prefer the Hero 9’s color profile. Keep in mind, however, that the Hero 9 cannot capture immersive 360 photos while the One R can.

The video quality is similar when I compare the photo quality of both cameras. While the One R with the 1-inch Mod is superior in quality, GoPro Hero9 is more versatile and easier to use.

Insta360 One R and GoPro Hero 9 also highlight their workflow. Depending on your preference, you may prefer to use the camera with your computer or the phone directly. Each of these devices has a simple but useful app that allows you to edit your footage directly. While it may not be as powerful as your computer software, it can still be a great way to share them with others.

Insta360 One R and the Hero 9 are both impressive cameras. Many people compared Hero9 to the One R, which was more affordable at the time but could also shoot single and dual lenses. Hero 9 is now much more affordable than the One R, although the One R’s price has remained stable for a while, so it is still more expensive. They are comparable in image quality, with the same 5K at 30fps and 4K at 60fps.

The One R has a larger field of view and can be used with three lenses. These include the 1-inch sensor lens and dual-lens. The 360 system is less expensive than MAX, but Hero9 is a full package at a lower price.