When it comes to compact cameras, there are a few big names that come to mind. Two of the most popular are the DJI Pocket 2 and the Sony ZV1. Both cameras offer great features and image quality in a small package, but which one is right for you? In this article, we’ll compare the two side-by-side to help you decide 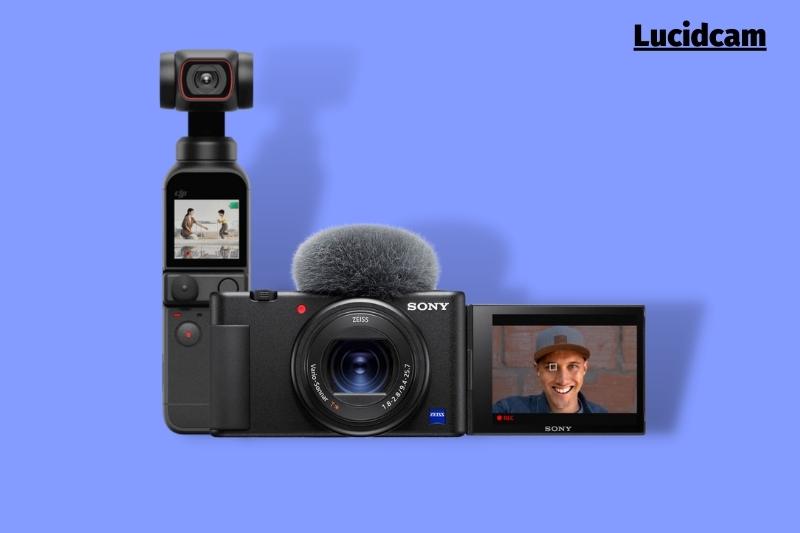 The compact DJI Pocket 2 has a 3-axis control gimbal at its helm. It is mounted on a stick that houses all the brains, battery, and screen. The base can be held in your hand. Frame your shot on the 1-inch LCD display. You can also shoot as long as you like on this 117g light gadget. You can also prop it up on the included tripod from the Creator Combo package.

The DJI Pocket 2’s screen has the mode and record buttons, while the power button is located around the side. You can still turn on the gimbal via the mode button. However, the power button located at the side can turn it off. This is useful for avoiding accidental shutting downs while cycling through modes.

The Pocket 2 has a USB-C port at the bottom. However, when the Pocket 2 is mounted on a tripod, you will need to connect the gimbal with a phone using a universal adapter that slips between the screen’s buttons and the screen. The Pocket 2 box contains small Lightning and USB C adapters, which can be used to attach your phone and export video.

A physical connection is a faster and more reliable than using wireless to transfer 4K video, as we do with many action cameras. The adapters can be lost easily.

The Creator Combo is for you if you plan on simultaneously charging your Pocket 2 and shooting while it is on a tripod. The standard package includes a tripod mount base that covers the USB-C port. You can also add an additional USB-C port to the back by using the Do-It-All lever.

The DJI Pocket 2 comes with a hard plastic holster. It is snug and secure. Drop Aware allows you to rest easier when the case is not in use. Drop Aware is DJI’s preventive measure that detects a fall to lock the gimbal to minimize any damage. Although it’s not an action cam like the GoPro Hero 9 Black, it’s a great addition to anyone looking for mechanically stabilized video.

The new Sony camera is compact in size and weighs only 10.4 oz. The camera comes in a rectangular box with the mandatory matte black finish. The new Sony is a compact camera with a side-folding screen and oversized record button. This makes it easier to record content. The video camera features a SteadyShot image stabilizer and a 2.7x zoom lens, which will be appreciated by most vloggers. The YI 4K Action Camera is a more action-oriented model. 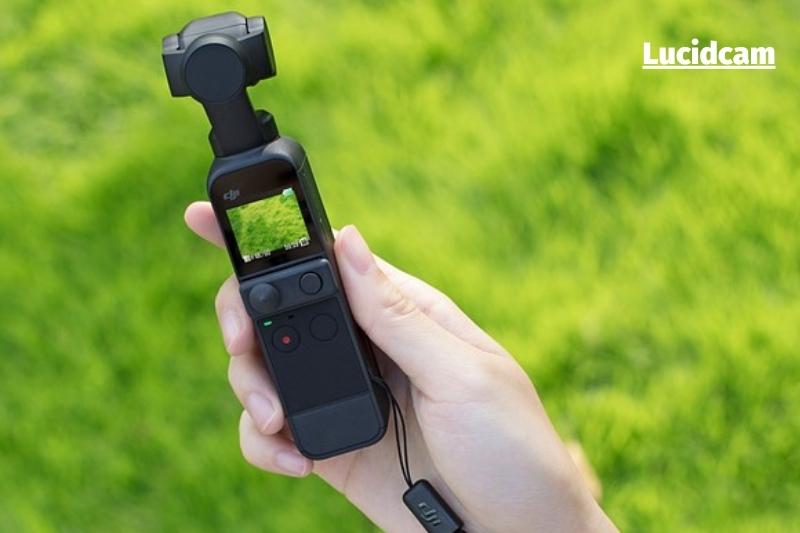 These framerates and the fact DJI included a Pro Mode with flat color profiles indicate that Pocket 2 was made for videographers. Slow-motion video can be captured at FullHD resolution up to 240p.

The new live streaming support will be a boon for YouTubers and Facebookers who need wireless broadcasts. Thanks to RTMP support, other services such as Twitch can also be streamed.

We’ve also seen Hyperlapse, Motionlapse and Timelapse. Also, the panorama for photos, countdown and countdown are all other modes. The new story mode and HDR video capture feature promised in future software updates will allow you to stitch together clips to create a montage video. 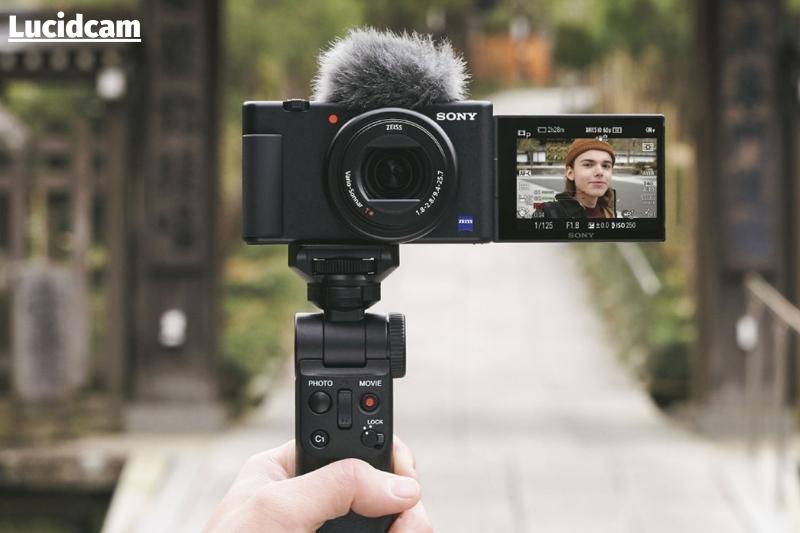 Sony’s camera menus have a reputation for being as intuitive as a book on hieroglyphics.

These settings include two new default settings that the camera’s custom buttons can use. The ‘Bokeh switch’ is the first. This will immediately switch to a wide aperture to give your footage a blurred background. This shortcut is based solely on traditional optics and does not work in the same way as smartphone portrait modes.

The second, and possibly more useful, the custom button is called “Product showcase”, which is specifically designed for YouTubers who are experts in reviewing products.

This doesn’t do any more than what you can do with the settings. However, pressing this immediately turns off SteadyShot stability (making a tripod essential for this model) and Face and Eye Priority AF. When you hold a product in front of the camera, it will focus on that object instead of prioritizing your face. This is possible because of the ZV-1’s speedy autofocus.

These feel like bolted-on solutions. The ZV-1 feels a lot like an RX100 compact camera. It also feels dated when compared to touchscreen apps like FilmicPro. Expect to spend a lot of time looking through the ZV-1’s menus and creating custom menus.

Here is a comparison of the Pocket 2 and ZV-1 sensors. 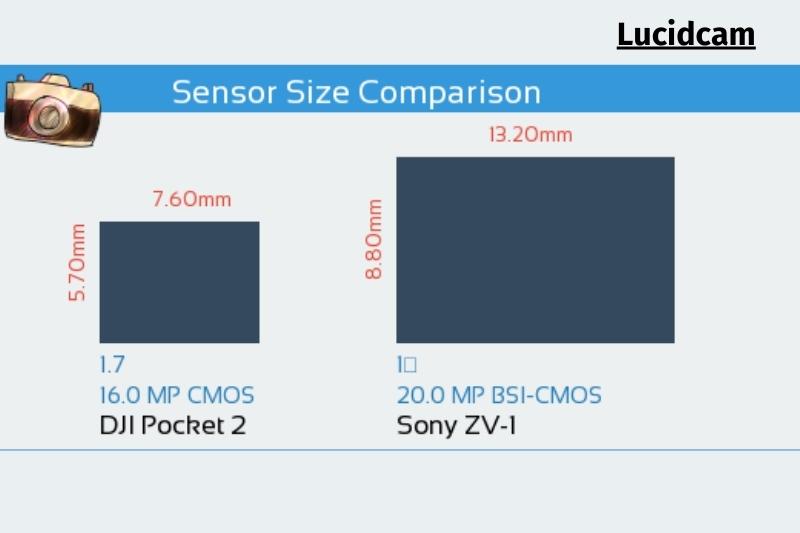 As you can see, the Sony ZV-1’s sensor area is 2.7x larger than that of the DJI Pocket 2. Photographers with larger sensors have more control over the blurry background and depth of field than those with smaller sensors.

It can be difficult to compare a prime lens and a zoom lens. The Sony ZV-1’s Zoom lens offers greater flexibility than the DJI Pocket 2’s fixed focal length 20mm lens. Pocket 2’s prime lens, on the other hand, makes it a more specialized camera. This fast lens offers exceptional image quality and unique rendering, but you have to sacrifice the flexibility of a zoom. The Sony ZV-1’s telephoto end has 50mm more reach than the DJI Pocket 2. The maximum aperture at the tele end of both cameras is f1.80.

Although the Pocket 2’s 875mAh battery is small, the gimbal’s screen is also very small. The Pocket 2 can heat up if you are shooting a lot of 4K footage.

The Sony ZV1 is an excellent camera that has long battery life. The battery can last for up to 4 hours, making it ideal for day-long shooting. It also offers a variety of functions and features that make it an excellent choice for photographers. 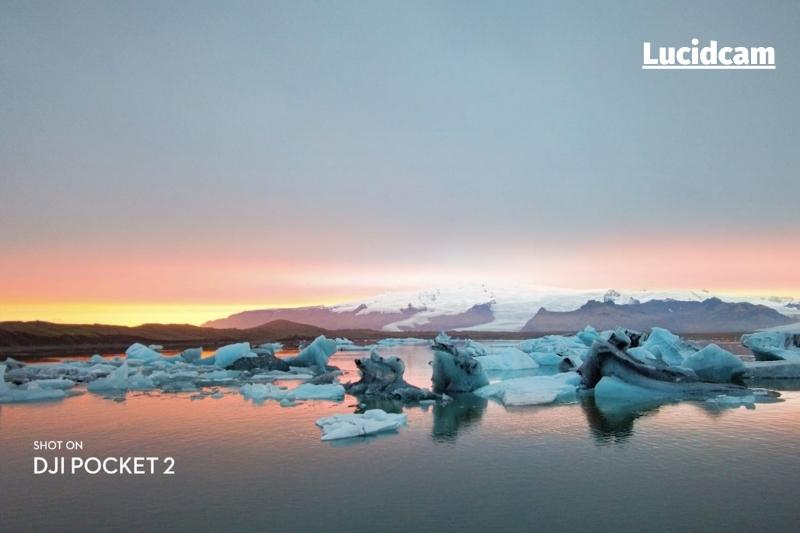 Although we refer to the DJI Pocket 2’s sensor as a “smartphone sensor”, don’t let this deter you; smartphones have advanced a lot. This small gadget is capable of capturing a stunningly shallow depth-of-field at close range, which is amazing. It also has improved autofocus, which makes it even more delightful.

It is hard to overstate the utility of object tracking. That’s why we are bringing it back. The Pocket can be placed on a tripod (standard thread fitting), and the head will follow you. As long as the app is running, the Pocket will keep you in the center frame. The DJI Pocket 2 was aided by heavy backlighting and lost focus occasionally. However, it never lost its track face.

The sensor’s larger size allows it to capture 4K video, even when the zoom is a little. Four times lossless at 16MP stills and 1080p video, three times for 2.7k and two times at four-channel 4K video. If you are shooting in well-lit scenes, this means that you can crop your shot and track your face with a digital camera without having to remove your pajamas. You also retain a 4K resolution. Although it isn’t the sharpest 4K we have not seen, decent sound and a good picture should be enough for most vloggers.

The Pocket 2 also has full access to the Pro controls, so you can tweak the shutter speed, ISO, EV, focus mode, and ISO of 100-60000. However, the app is easier to use. The ability to adjust the focus speed and pause recording speeds is also new, making it a great tool for creators. TikTok: A dream come true? It’s not so difficult to capture portrait mode content on Pocket 2, so you might want to use your smartphone for Reels.

You can squeeze even more into a frame, which is even more helpful for shooting modes. Vloggers will love the 93-degree field of view. It is larger than the 80-degree Osmo Pocket and captures more of what’s behind.

There are many ways to enhance the footage of the Pocket 2 if you are a videographer or use more expensive hardware. You can create a Full HD project by shooting in 4K and downsampling the footage.

Flattening your output with the cinematic D–Cinelike color profile will make it as editable and easy as possible. Because of the gimbal system, electronic stabilization (processing), which is required for pocketable video options, is less than that needed for other options. This allows more space to edit in post. 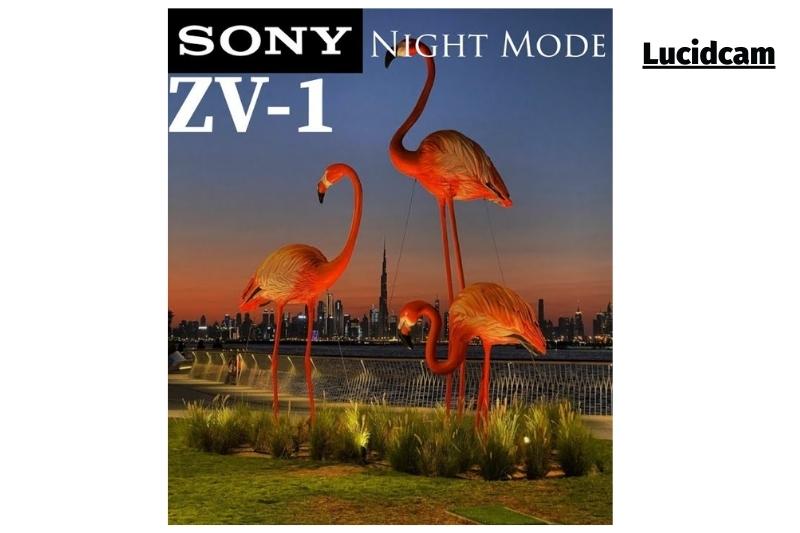 The ZV-1 is capable of shooting 4K/30p at 30p, 1080p/120p at high speed, and up to 960 frames per second (though at a lower resolution). If you plan to view your footage on an HDR-capable display, the ZV-1 can shoot HLG. Advanced users who want to tone their videos in post-production will also be able to use SLog2/3. For newer users, the ‘intelligent automatic’ mode adjusts settings automatically based on a scene. There are also standard P, A and S modes.

Thus, Depending on your need, choose the right drone for yourself.