The GoPro Fusion and the Hero 7 are two of the most popular action cameras on the market. They both have their own unique features, but which one is the best? In this article, we will compare the two cameras and see which one comes out on top. 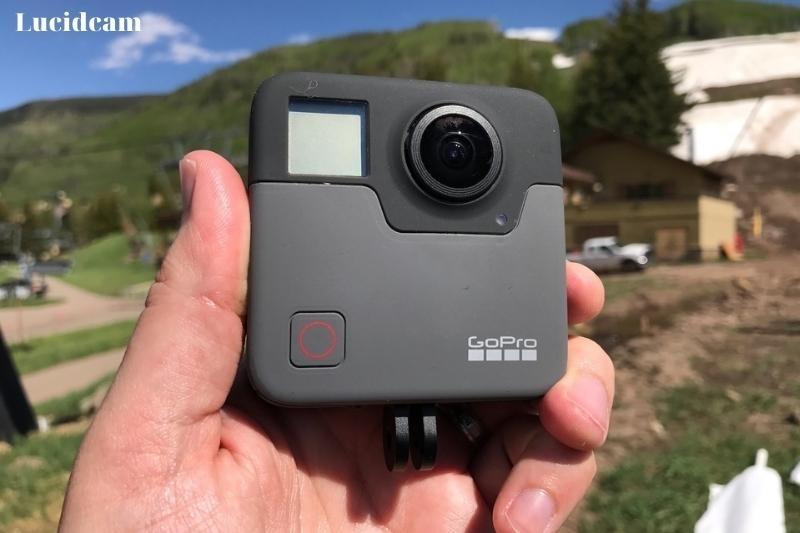 GoPro is no stranger to the world of the action camera. GoPro products are well-known for being robust and resilient. They can withstand extreme weather conditions and reckless abandon with no complaints. Fusion is the first 360-degree VR camera by the company.

Fusion vs. Hero 7 is more than just the ability to create a spherical movie. Even if you are looking for a simple video, the action cam has many cool features. GoPro Fusion can record a spherical video, then transform it into a flat Full HD video using the OverCapture mode. Fusion records everything around you, so there’s no need to worry about framing.

GoPro Fusion isn’t the only one that offers this convenience. The entire feature list of GoPro Fusion is really impressive. Moreover,Fusion does not include some of the advanced feature found in GoPro Hero 7, such as HyperSmooth stabilization or stabilized timelapse recording. 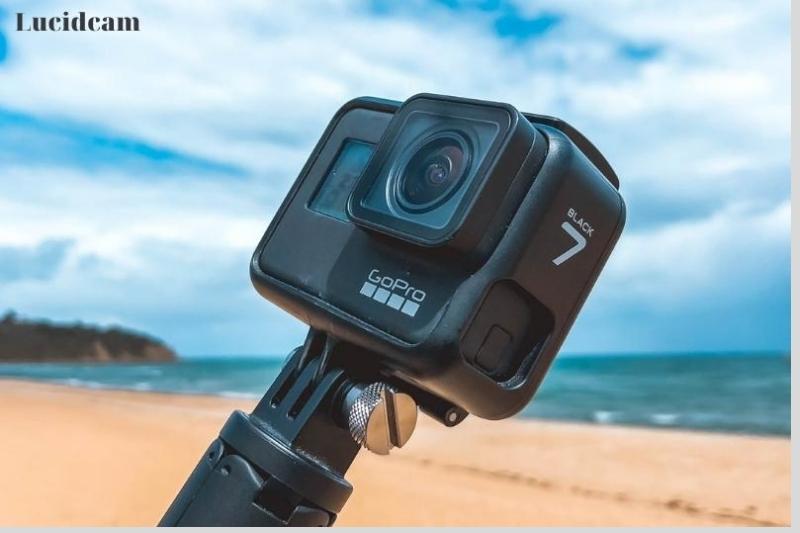 Many agree that GoPro Hero 7 has the best action cam on the market. Hero 8 has been released, and it is now the flagship model. However, GoPro Hero 7 remains a solid choice because GoPro Hero 8 still is very expensive. The price of the GoPro Hero 7 is expected to drop with the new model’s release, making it a better value for money.

It is an understatement to say that Hero 7 is a minor improvement over its predecessor. Although the maximum resolution of the GoPro Hero 7 is still limited to 4K/60p video, the new HyperSmooth image stabilizer will be available. Older models cannot use stabilization at 1080p or less. This will enable you to capture your adventures and trips in 4K without blurring or shakes. 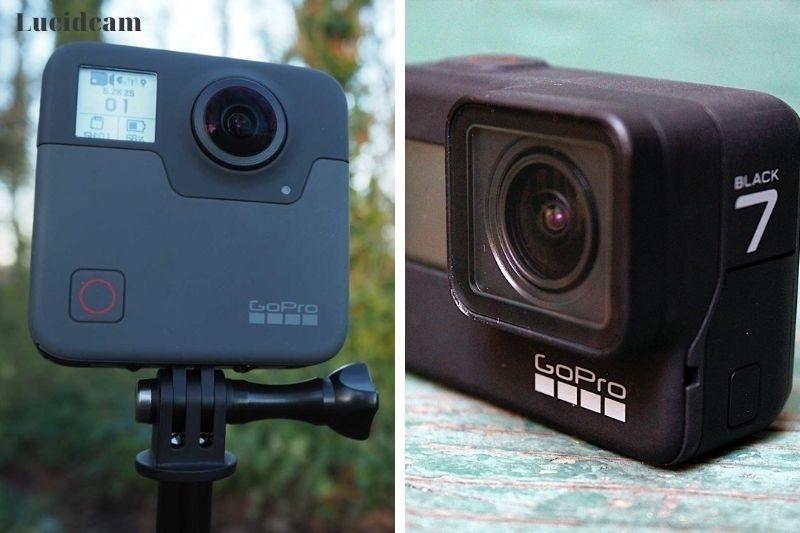 Because they were designed for two different purposes, their overall design is distinct. The Hero7 Black looks similar to Hero 6. It has a standard action camera design. However, the GoPro Fusion’s boxy design is for 360-degree spherical recording. It weighs 220g and is larger than the Hero 7 Black.

The Hero7 Black’s screen measures 2 inches and includes a touchscreen. You can navigate by simply swiping with your fingers.

GoPro Fusion’s standard LCD screen is 1″ in color and non-touchscreen. This is a good thing because this camera can capture every angle, so it needs space for the lens. Also, you cannot see the entire picture clearly on the small screen. You can, however, use GoPro’s smartphone app to send the image directly to your phone, which allows you to see what you are doing.

The GoPro Fusion is different from a regular action camera. It has a lower water-resistance reaching a maximum of 4.8 meters submerged in the water. This compares to Hero 7 Black, which can conquer 10 meters.

What’s in The Box? 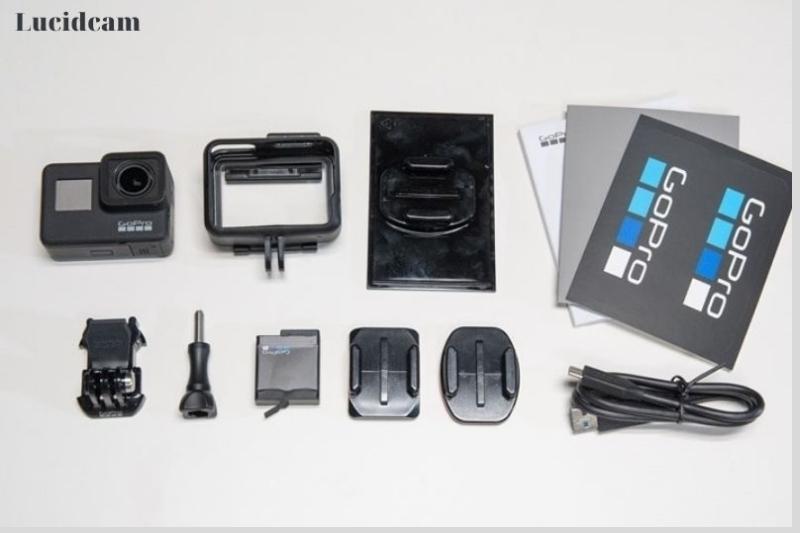 Packaging is important as well, especially when accessories can be expensive. The package will contain a few extra items for the more expensive cameras.

The Hero 7 Black comes with a small stand and a pair of sticky mounts. These can be used on any flat or curved surface. A quick start guide, a USB cable, and a battery are included as standard.

The GoPro Fusion is more costly, so you will get more accessories. The camera includes a tripod/selfie stick, carrying case, several mounts for flat and curved surfaces, a battery, thumb screw, and USB-C, as well as a quick start guide.

This isn’t a bad thing for the Hero 7 Black; as you know, your money goes towards the camera and not accessories you won’t use. 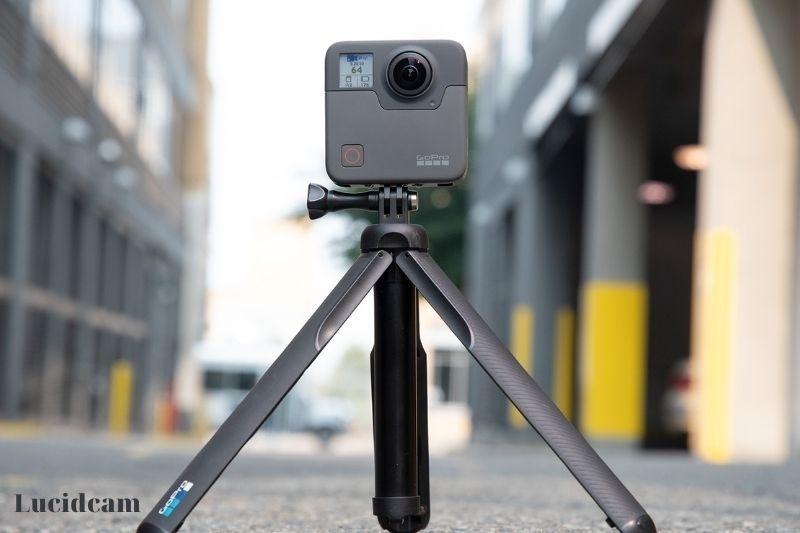 GoPro Fusion has Bluetooth and Wi-Fi connectivity for easy pairing with Android or iOS devices. If you’ve ever used a GoPro smartphone before, you can still use the existing GoPro mobile app.

However, GoPro Fusion’s camera control is very different. After the camera has been connected to your smartphone, you can view a live view of both lenses. You can zoom in and out to see the 360-degree view.

After you’ve finished recording 360-degree videos, you can use OverCapture in the mobile app for re-recording the video to create a flat Full HD video. You can also use the gyroscope on your phone to choose the point of view.

GoPro Fusion does not support certain well-known GoPro functions like Super Photo and QuikStories. GoPro Fusion does have an image stabilization system built-in, but it is not the advanced HyperSmooth technology. Fusion is not able to live stream to YouTube or Facebook.

You should decide whether you require powerful image stabilization when deciding between GoPro Fusion and Hero 7. Hero7 will be a better choice if you plan to use your action cam to record off-road runs and trail runs.

HyperSmooth is available in 4K/60p recording and can ensure smooth footage, even during the most intense adventures. TimeWarp is also available with Hero7. This allows you to use the image stabilization feature in timelapse mode.

Although the built-in microphone is excellent and better than previous models, you can connect an external mic via USB to get the best sound quality. The Hero7 supports live streaming at 720p and 480p.

It is truly impressive in terms of image quality. Although the image stabilization is not able to remove heavy shakes or impacts, it can deal with vibrations and judders when recording and walking simultaneously. The colors are vibrant and solid. Images are sharp and detailed with lots of detail.

Although the image stitching is better than other 360-degree cameras, it is still not perfect. Although it isn’t very obvious, there may be slight overlaps where images from both lenses merge. OverCapture can cause stitching problems. Frame carefully to avoid this.

The video quality of the Hero7 is excellent right out of the box. The camera has a lot of detail, contrast, as well as dynamic range. The images look vibrant and rich in good lighting. Some scenes can appear a bit warm. The image quality is excellent, even in gloomy conditions. Although indoors can be more difficult, the overall performance is still quite good.

The Protune mode is a great way to maximize the performance of the Hero7. You can adjust settings like the ISO value, sharpness, exposure compensation, and ISO value. It also allows you to boost the bitrate. If you need to edit the footage in post-production, you can change the color profile of GoPro’s standard color correction to ‘flat.

The audio quality is noticeably better than the previous models. Although the microphone is not impervious to wind noises, it can reduce most of them and produce clear, crisp audio. GoPro 7 is capable of taking 12MP still images and has the Super Photo mode, which is basically a sophisticated HDR function.

These are the areas where they differ. GoPro Hero 7 Black behaves more like an action camera. It must be pointed at what you wish to record. The wide-angle lens has a diagonal field view of 149 to 49.8 degrees, depending on how you zoom.

The GoPro Fusion records everything around it, providing audio and footage that can be used for VR goggles. You can crop sections to make them flat. It is regarded as the best 360-degree camera available. 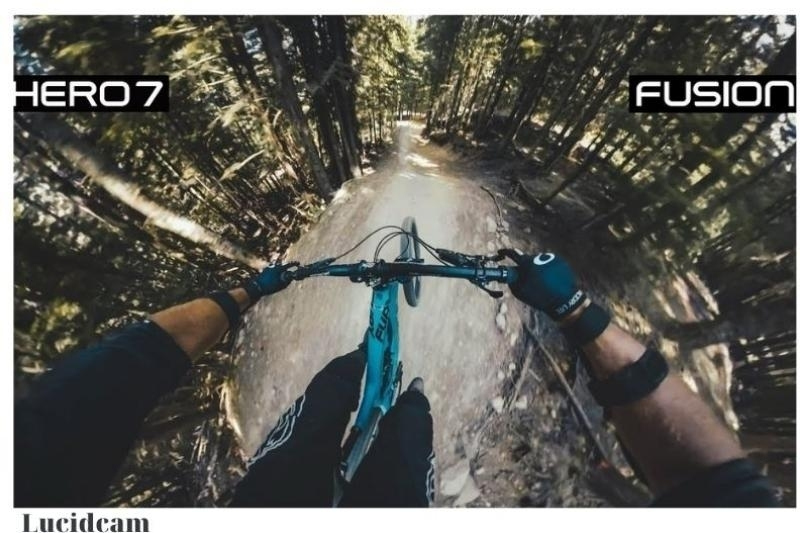 GoPro 7 Black, a highly advanced action camera, offers state-of-the-art technology. It can record resolutions as high as 4K and 720p. You can also record slow-motion videos at a steady frame rate of up to 60fps at 4K and 240fps @ 1080p.

The GoPro 7 Black is a significant upgrade to its predecessor, thanks to the tweaked GP1 process. This camera has a variety of features, including the state-of-the-art Hypersmooth 3-axis stabilizer, which can create smooth videos even with a lot of camera movement. This feature can be used underwater or while creating time-lapse videos.

Abrella-branded chips are used in the GoPro Fusion. This is similar to older GoPro models. This is an action camera that does not come with a standard lens. It requires extra steps to convert individual 180-degree video clips into 360-degree formats. Even on a powerful computer, this can take several minutes.

Although they have very similar performance specifications, they are designed for different purposes. 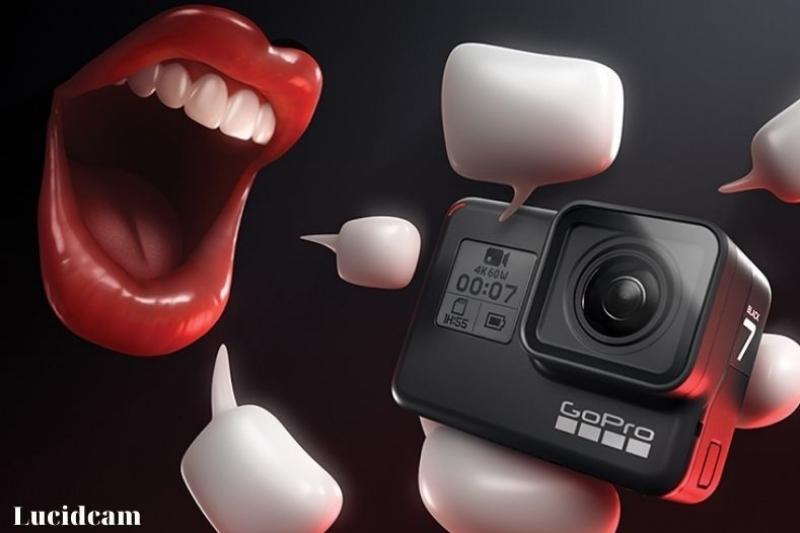 The GoPro Hero 7 Black was designed for casual and everyday recording. It has three microphones that produce stereo sound. The GoPro Fusion features spatial audio, which allows you to make surround sound from all sides using the four microphones on the top and front of the camera.

This technology is extremely useful when you use your footage in VR technology. It also helps you to capture the moment more effectively.

The GoPro Hero 7 Black has a single Micro SD card slot. It can also be used with any Micro SD card. To avoid unnecessary errors, however, you should get a Micro SD card that can write at 80Mbit/sec and more if you are looking to capture the best quality settings.

Because of the complex video recording system and high resolution, footage from this camera can take up a lot of space. The GoPro Fusion has two Micro SD card slots. One for each of the internal camera modules. You don’t have to do much if the video outputs from both cards are being merged automatically. However, if you plan to use a card reader on a computer to browse your videos, you will need to manually match them into a software program. 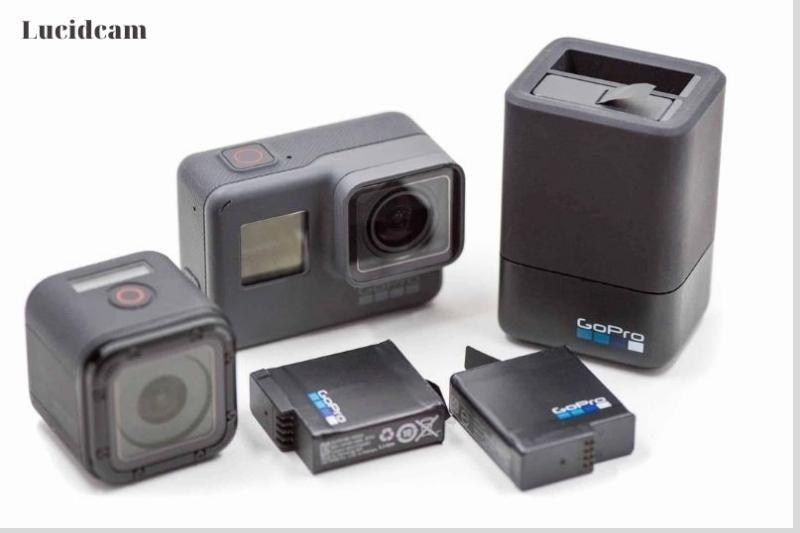 Despite having different batteries, both cameras have approximately the same recording time at the highest quality of 70 minutes. The battery will run faster if you use 4K on the Hero 7 Black or 5.2K 360-degree on the Fusion.

Recording in lower quality modes like 720p and 1080p can help you get the best out of your Hero 7 Black’s battery. Your battery can last up to 110 minutes.

It’s the same with Fusion. If you reduce your resolution to 3K, you can increase your battery life by up to 80 minutes.

The cameras come with standard GoPro multi-accessory mounting brackets. However, the Fusion, a 360-degree camera, does not allow for drone mounting. While the Go Pro Hero 7 offers a broad range of accessories that can be used in all GoPro cameras, the Fusion’s viewing angle is somewhat restricted. Mounts that don’t interfere with video output are best, and your fingers should be kept under the device.

This was something we mentioned in the previous paragraph. The GoPro Fusion action camera is the most advanced and versatile ever made. It’s also expected to be the most costly. This camera sells for $599.99, which is quite a bit. We’ve noticed that GoPro recently offered a $299.99 special price. This could indicate that they may not be selling these cameras as the price is too high or that they are making a replacement.

In this article, we have compared the three top-notch models of GoPro. In terms of video recording quality, they are simply brilliant. The price range is almost identical across these three. It depends on your requirements which model you should choose. If you are a professional or semi-professional videographer, then you should go for the GoPro Fusion with all the features it offers and its professional-grade video quality.