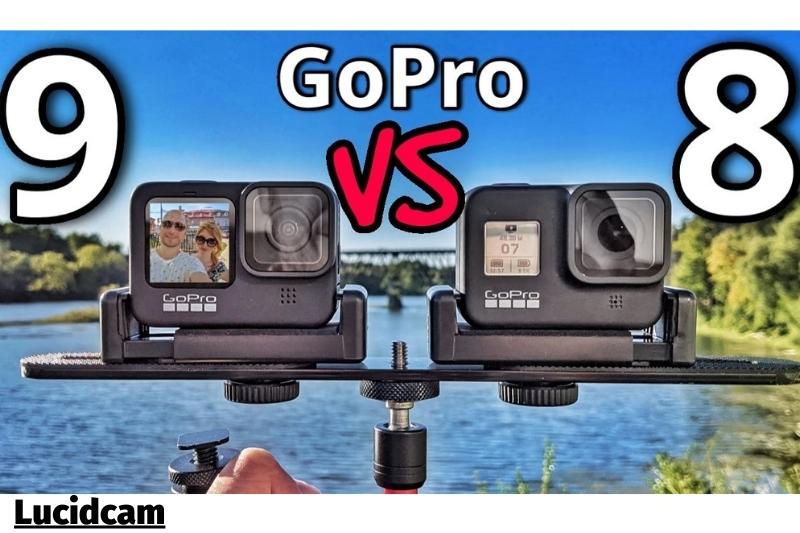 The HERO9Black has a live-view, full-color front screen. The HERO8Black has a black-and-white screen that is used only for status information.

The HERO9Black now features a full-color, front-view preview screen that you can use to view live-view images. This screen can be used to view the live preview of what is in the frame, which is useful for vlogging or selfies. Instead of pointing at the camera, guessing and hoping, you can actually see what’s inside it.

Although it is smaller than the screen on the back, it can be very handy if you are in front of your camera and want to ensure that the shot is exactly how you want. Although technically, you can do this with the HERO8Black, it requires separate accessories or mods to add a flip-up display from the back. The Display Mod also works on the HERO9Black but is much less relevant since that camera already has the preview screen built-in. This new approach is much simpler and doesn’t require you to purchase an accessory.

You can also use the front screen in a variety of ways. It can be used as a live preview in full color. It uses far more power than it needs, so you should not leave it on constantly.

It can be used as a status screen to show the usual information such as shooting mode, remaining battery life, SD card storage capacity, and duration. It is sharper and more practical than the older style on HERO8 Black due to its larger size and better resolution.

You can also have the device turned off, which is a good option for conserving battery power. 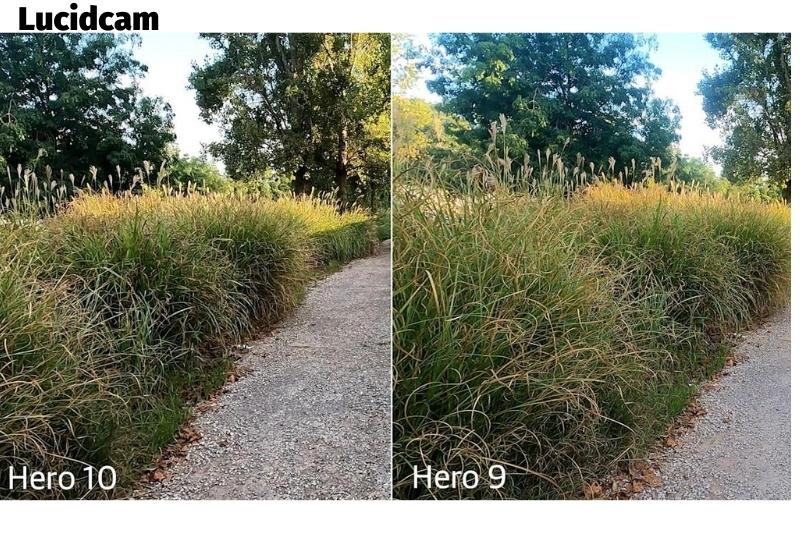 We see little difference between the two models in terms of design. It’s not surprising, considering that the Hero 9 Black was the first significant design change in many years.

GoPro’s 2020 model has a larger camera and a color display on the front. This allows you to frame your own videos. The new lens cover can be removed and replaced with a new lens. This makes it easy to swap out the lens for another lens or a replacement if your original one breaks.

The Hero 10 lens cover has been improved to be more durable. It is more scratch-resistant than the Hero 9’s and more hydrophobic, so water will slide off it easier. It will also reduce ghosting when the video is shot through it.

The only difference in the design is the bright blue color of the Hero logo and GoPro’s logo. It is approximately 5 grams lighter than the inner frame. The camera’s outer frame is darker and has a rougher texture. It’s otherwise almost identical.

Both cameras are waterproof up to 10m/33ft. They also have the same battery door design and water channel. They both come with integrated mounting arms on their undersides, so you don’t have to buy additional cases to mount them to GoPro accessories. The Hero 10 can be used with all Hero 9 Black Mods, including additional lights, microphones, and displays.

The GoPro Hero 10 Black’s 23MP sensor is the most powerful GoPro camera. Hero 9 has a resolution of 20MP. This is almost twice the resolution of Hero 8 Black’s sensor. Hero 9 and 10 can shoot 5K and 5.3 videos, respectively. Hero 8’s maximum resolution is 4K. This means that the new GoPro models produce sharper images with more detail than their predecessors. 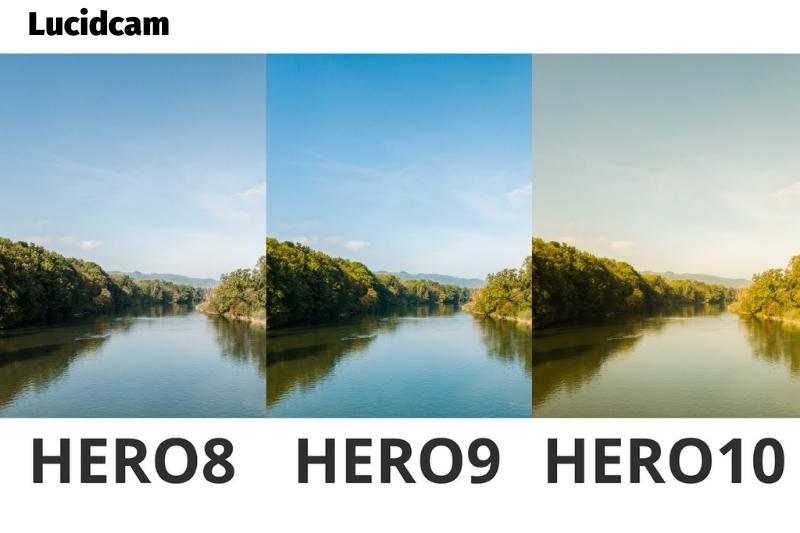 GoPro’s new camera is twice as fast as its predecessor when it comes to video recording. This means that the camera can capture twice as many frames per second, thanks to its new GP2 processor.

The Hero 9 can record 5.3K video at 30fps, while the Hero 10 can capture that same resolution at 60fps. It can also shoot 4K at 120fps, which is 60fps for the Hero 9. The higher resolution still frame grabs are possible due to the larger processor and sensor.

GoPro claims that it has also improved low light performance, so noise levels on the Hero 10 are much lower.

The ‘digital lenses,’ which are integrated into Heros software, allow for a wide variety of resolutions and frame-rate combinations at different focal lengths.

Both cameras can be used to stream live at 1080p resolution. The cameras use an EIS and algorithm combination to stabilize footage with a HyperSmooth feature. The Hero 9 has a smoother camera, and the horizon leveling function is now available. You can also get horizon leveling for everything if you purchase the Max lens, even if the camera is rotated 360 degrees.

All three cameras have Bluetooth and WiFi connectivity, so they can be connected to smart devices with the GoPro App. These cameras support Livestream at 1080p. These cameras were designed with vlogging in mind. Each camera comes with its own Media Mod (sold separately), which adds a directional microphone that is ideal for vlogging. Other useful accessories for vlogging are also available, such as Display Mod, Light Mod and so on. 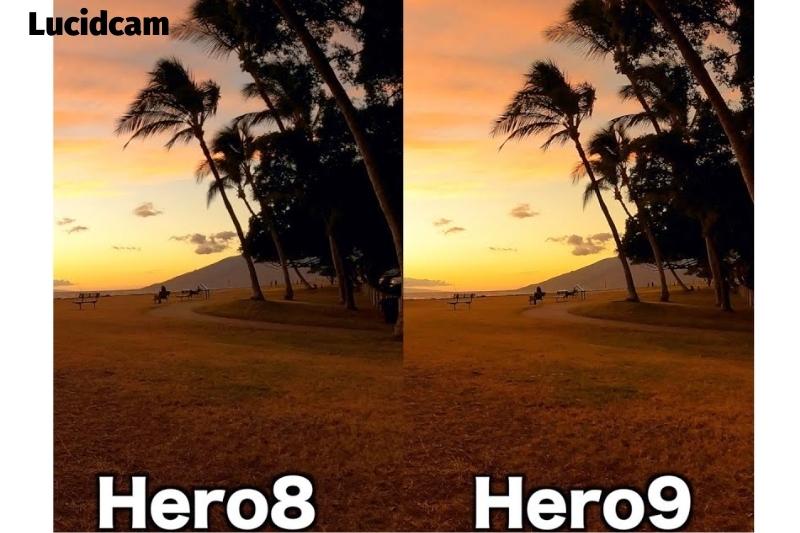 HyperSmooth 2.0 was introduced by GoPro Hero 8. GoPro has been upgrading its EIS continuously to the latest versions ever since, including HyperSmooth 3.0 for Hero 9 Black and HyperSmooth 4.0 for Hero 10 Black. You can apply stabilization at higher resolutions on the Hero 10 Black (5.3K30 to 4K60 and 2.7K120).

TimeWarp – A fun Hyperlapse mode that creates super-smooth motion times lapses. It’s even better when you use TimeWarp 2.0 on Hero 8 or TimeWarp 3.0 for Hero 9 and 10 Black. Without the 10% crop, you can get stunning hyperlapse shots. It’s also available at all frame rates, resolutions and settings on the most recent GoPros. 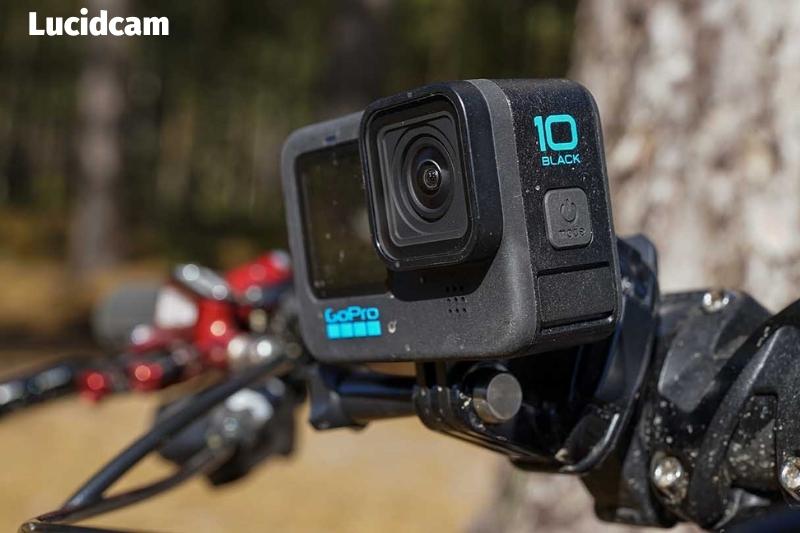 All three GoPro cameras are wirelessly controlled via the GoPro mobile app through WiFi or Bluetooth. The Hero 9 and 10 Black are not compatible with the Smart Remote or Remo Remote, but the Hero 8 Black is.

GoPro increased the battery capacity to 1720mAh with the Hero 9 Black’s launch. The same battery is also used in Hero 10’s latest version. Comparing it to its predecessor, the Hero 8 Black (1220mAh), this battery increases the camera’s stamina by around 30%. It can also handle extreme cold conditions better because of its larger battery size.