What Are Fake Security Cameras? 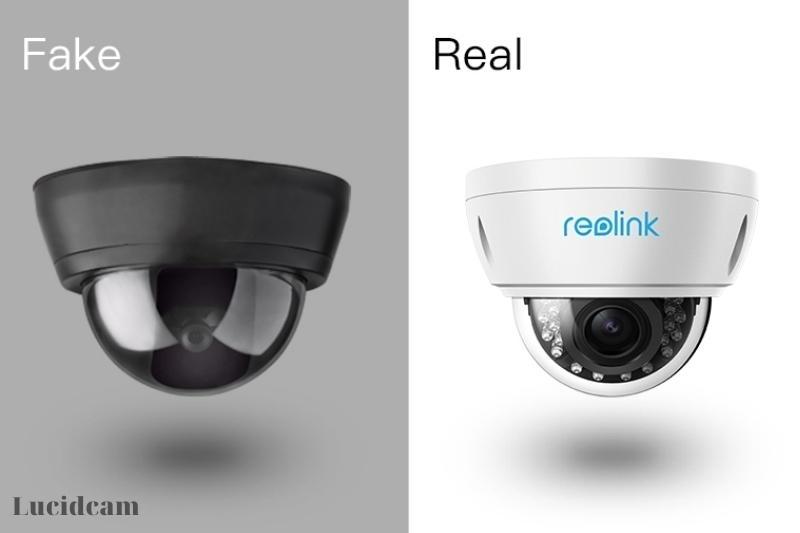 Fake cams can be used to imitate a real camera, but they are not capable of recording or imaging anything. These fake cameras can also be called dummy cameras or decoy cameras.

Sometimes, Small shops often can’t afford to buy them, and large malls and buildings cut costs by using a mixture of real and fake cameras.

It can be found in high-traffic areas. They are sometimes used in conjunction with real security cams, but not in the exact same place. This gives the impression of thorough security and saves the building/homeowner/company a lot of money and installation costs.

It can be created from empty camera shells. We’ll show you how to do it later.

Fake Security Cameras: How Does It Work? 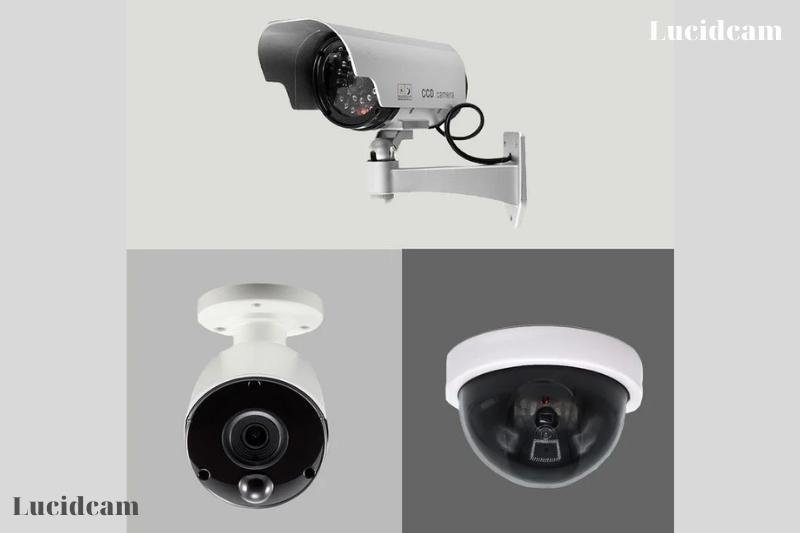 They look like real security cams but lack any recording or photographic capabilities.

These cameras are often made of a mixture of inexpensive and well-painted materials. They look almost identical to real cams from a distance.

Fake security cameras trick you into believing you are being monitored and can be used to stop people from doing things they shouldn’t.

Unreal cams can even have fake lighting or movement to fool people. These cameras are more costly and can be purchased at most major retail outlets.

It can also be made from decommissioned cameras. If you look closely, they look almost identical and still work.

Because they have never used real security cams, most people are unable to tell the difference.

Why Would Anyone Install A Fake Security Cam? 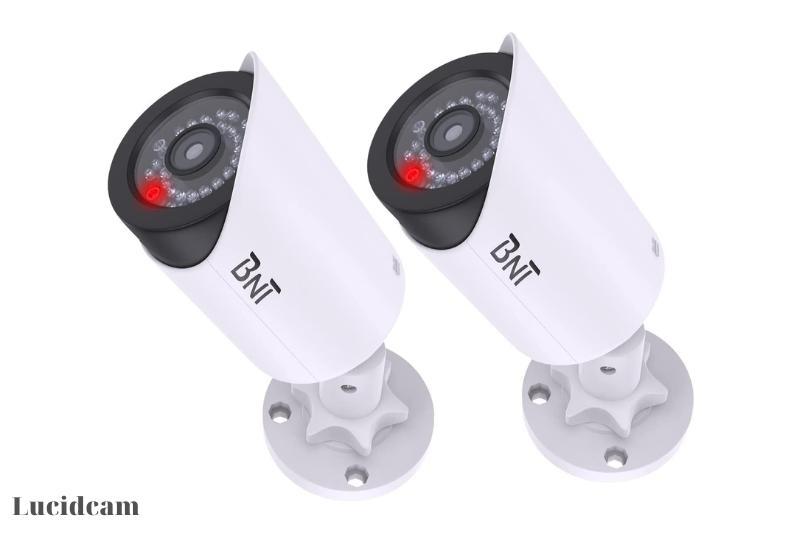 Consider why someone would put a fake ( We also have reviews on high-quality cameras).

These are some of the reasons people may use unreal cams.

They didn’t want the expense of a real security camera. They will instead buy a fake camera, which will be less expensive–a dummy one.

To fool people into believing they are real, fake or dummy security cams are created. Most people purchase dummy cams or fake security cams, believing it is a security measure to trick visitors into thinking they’re being monitored.

A third reason why people buy fake cameras is to blend them with real cames in order to create the illusion of a stronger home security presence.

This may work for some people, but experienced burglars know the difference between genuine and unreal. They are not meant to be trusted as they can create a false sense of security.

How To Spot A Fake Security Camera 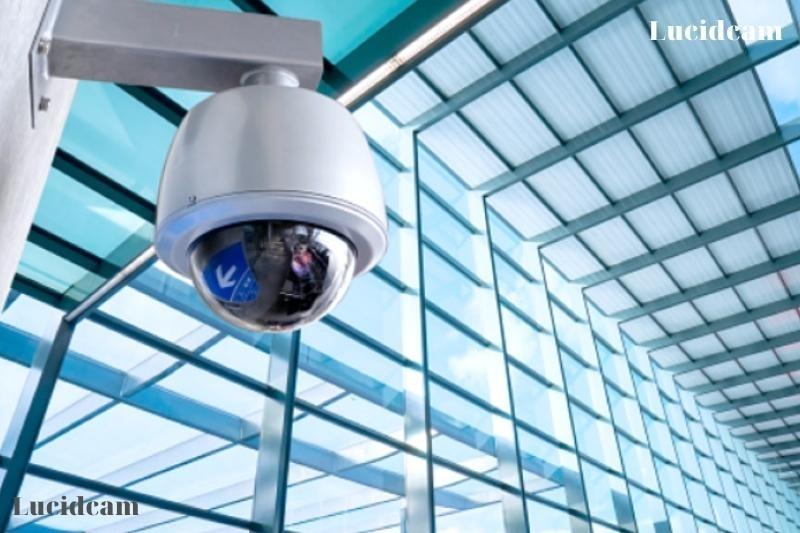 A fake security camera, on the other hand, is used to protect your property from trespassers and other illegal activity.

Besides the obvious benefits of installing your own unreal camera, here we list how to spot a fake camera. 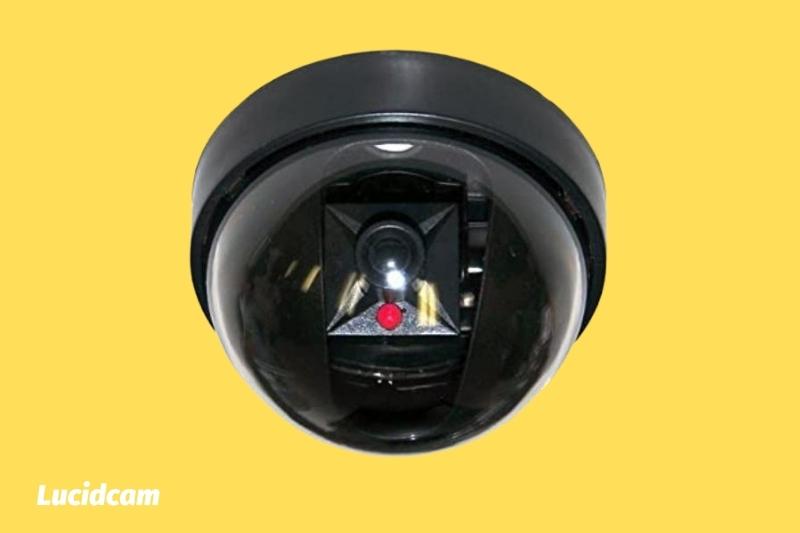 Bad intentions and people with malicious intent can quickly spot a fake security cam by the operation of its LED lights. They are intended to imitate the real thing. Experienced criminals will recognize a fake CCTV camera if it flashes even at night.

Real security cams don’t seem to be too loud, as they are discreet and not overpowering. Dummy surveillance cameras, on the other hand, have an overwhelming and obvious presence because everyone is supposed to see them.

For example, although you could find some old security cams with flashing lights to modern security cams, no light flashes at all.

Flashing the red light is one way to identify a fake camera. A red light is not visible on any real camera at the moment. Security cams are meant to be hidden from view so that visitors don’t notice them.

In most cases, a fake or dummy camera for CCTV looks cheap and fragile. A unreal camera is usually made from plastic instead of the standard waterproof aluminum cover. At first glance, it is easy to distinguish between high-quality metal from cheap plastic. You can make this distinction even easier if your dummy cameras are placed in a convenient location, such as the front door. It is easy to spot a fake camera, as you can see. 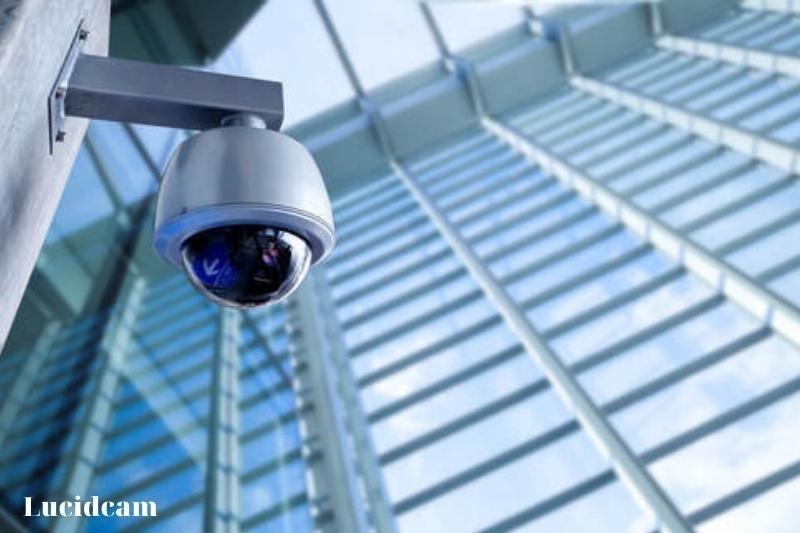 Fake cameras are not able to withstand harsh weather conditions because they are made from low-quality materials. It should therefore be placed somewhere safe and protected, such as under ceilings or eaves. Real cams, on the other hand, are constructed with high-quality materials to withstand extreme weather conditions. It can be placed anywhere, even outside, without any protection. A real camera installed outdoors is protected from all-weather elements.

The wires do not indicate if a security camera has been hacked. Some cameras come with wires, while others have wires built-in. Some cams have no visible wires. Fake cameras attempt to imitate real cams by using wires that stick out.

While this may fool some people, others will see that it is a fake copy of the real thing. Although wires may make unreal cams appear real, they could be used to conceal the camera. 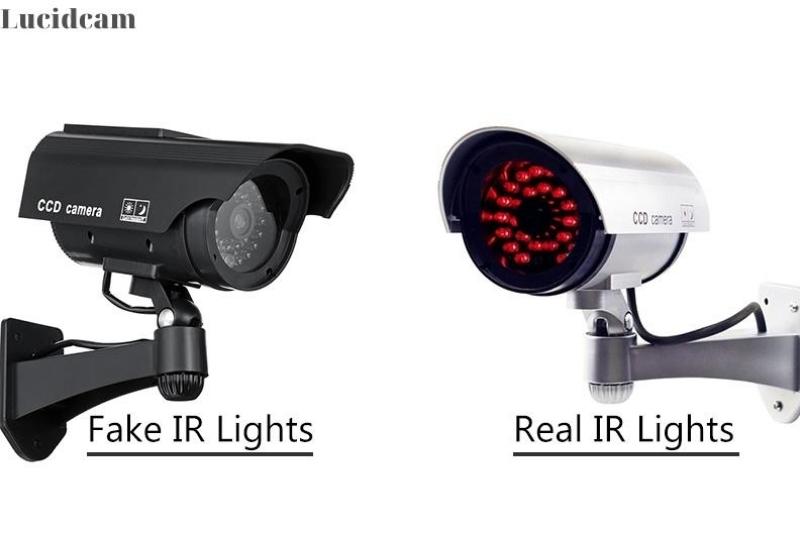 There are many motion-sensing cameras on the market today. These cameras sense motion and can record it. They don’t swivel or move when someone or something is near them. Some of these fake cams will also rotate in an attempt to mimic motion-sensing elements of real cams. Real security cams and motion-sensing cams don’t swivel. Real cameras can only start recording when the sensor is activated.

These cames can also record all movements and will not be moved. Fake security cams will record any movements. Cameras cannot track movement. Therefore, if you see a camera moving, it’s likely a dummy security camera or a fake camera.

You can instantly check the branding to identify a fake or dummy camera. Fake cams don’t have branding on their exterior. Real security cameras, on the other hand, have branding to prove their legitimacy. A fake camera may have branding. However, an internet search will quickly reveal whether such a brand exists or not.

These dummy cameras that have branding on them are fake. It is not enough to confirm that the branding is there. Once you start to search for the brand, it must be searchable. Most security cameras will display multiple branding in prominent locations. These features will not be present on fake or dummy cameras, and they are only for show.

A thief can easily spot a fake or dummy camera and determine if it is the real deal. Outdoor security cameras are exposed to wind.

Water and other elements of the outdoor life can cause damage to fake cameras made from inferior materials. It must be placed somewhere that is protected from the elements, such as under ceilings and eaves.

Real cameras, like ours, are made from high-quality materials. They are built to withstand any Mother Nature throws at them. It can also be placed anywhere outdoors unprotected. It is safe to assume that a camera is placed outdoors without protection from the weather elements or wear real.

The material used is a major factor in the difference between genuine and fake security cams. Fake cams are often made from cheap plastic rather than the aluminum waterproof cover. This is especially true when the camera is placed near the front door.

The majority of real cams can be powered from within the house by DC. They are powered by the main electrical outlet of the house, while most fake cameras use AA batteries for their power. Here are some things to consider.

Fake cameras’ recharging features are often ineffective as they cannot produce the same power as real cameras. A fake surveillance camera may also have a power source that powers its CCD/CMOS sensor.

What Are The Different Types Of Common Fake Security Cameras 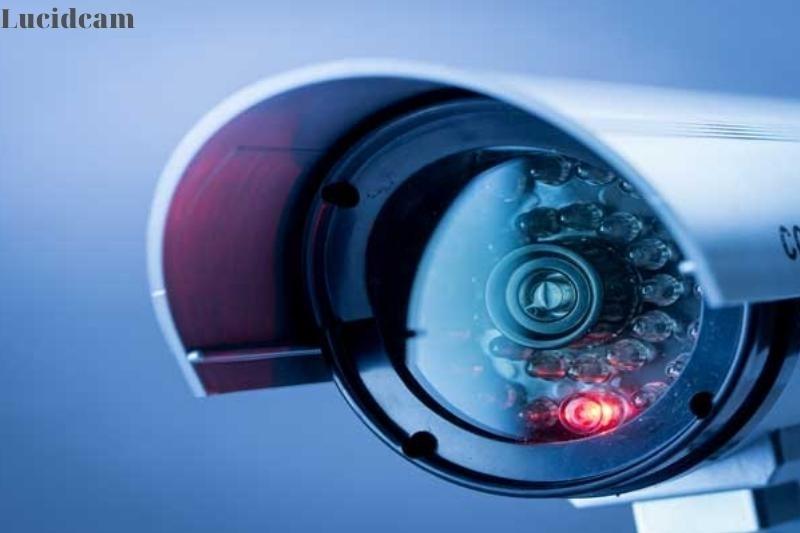 Most fake cameras either come in dome shape or bullet shape. These cameras are easy to counterfeit and are most commonly found at major retailers.

Wireless security cams can be difficult to counterfeit because they are made of hard-to-copy materials and have complex shaping.

These are the top fake security cameras.

Wal-Mart sells a variety of convincing and cheap fake security cams. The indoor/outdoor bullet security cam is the most popular. It has no brand name, and CCD Camera is printed on the side.

The lack of infrared light and the brightness of the LED lights can be used to tell that this camera is fake. The warning light is not activated by anything and will only go off at random times.

Fake dome security cameras are also sold. They are a 2-piece set, very reflective, and their flashing red light is not as bright as the real dome cameras. The red blinking light at night is prominent and very visible.

These are expensive and used to prevent people from damaging Arlo sets. They are very similar in appearance, but they differ in color and have a plastic-like look.

Another dead giveaway is the CCD Camera marking on the side.

As it “disappears into the wall mount”, you won’t be able to see the cable. 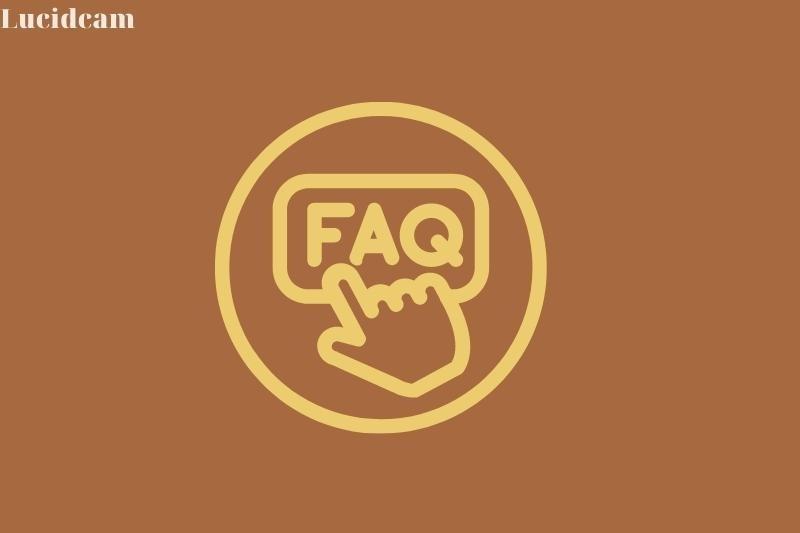 1. What Is the Best Fake Security Camera?

The best fake security cams will take the above information into account and mimic the looks, behavior, installation location, and branding of real cams

2. How can you tell if a security camera is on?

It is important to ensure that your security camera works properly and records the correct information. This will depend on what type of camera you have. An IP security camera equipped with infrared blinking red light should have a small red light surrounding the lens.

Logging into your security software is also possible. If cameras are functioning properly, this will allow you to view live-stream footage. Security cameras usually have power indicators that let you know if the cameras are working. These indicators can be a blinking or red light, depending on the camera.

Fake cameras can also be fooled by the most inexperienced burglars. These “cameras”, while not able to catch professional criminals, can be used by younger “part-time” thieves. Anyone who sees anything that resembles a camera could be frightened.

Here we give you the guide that we are talking about above. It is very useful in some cases. When you have understood, Luicdcam hopes it will be easier for you to distinguish between the fake or real camera. If you still have any questions, you can ask me directly. If you like this post, share it with your friends. Thank you for reading!