DJI developed the Inspire series to assist serious filmmakers. Phantom drones are less expensive, but they have major restrictions. Although DJI’s Matrice series, which are bigger and more expensive Enterprise helicopters, have far more versatility, they also have significant limits. For those who have Hollywood aspirations, but not a Hollywood budget.

This will be discussed at the end, but first, let’s take a look at Inspire 1 vs 2. 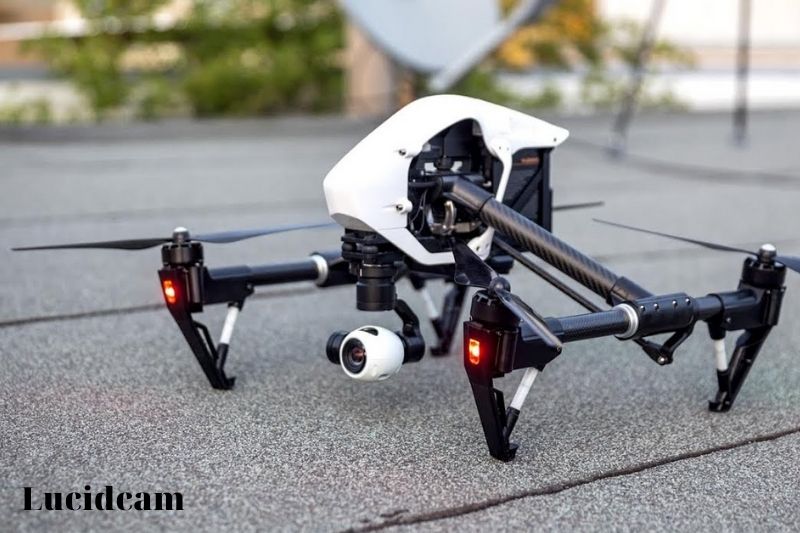 Both Inspires have impressive features and are impressive machines. Both Inspires use an aerodynamic transformative design that lifts the propellers and landing gear, giving them 360-degree unobstructed filming. This is the only mainstream drone that lifts the motors and feet simultaneously. It gives the Inspire drones their distinctive alien-spacecraft appearance.

The Inspire drones can be flown indoors and outdoors in conditions that are not possible for Phantoms or Mavics. The Inspires are stable thanks to GPS and Vision Positioning systems, just like all other DJI drones. Inspires have the same features as the Phantom, Spark, and Mavic drones. They also include fail-safes that bring the aircraft back to your location if it is disconnected or low on battery. 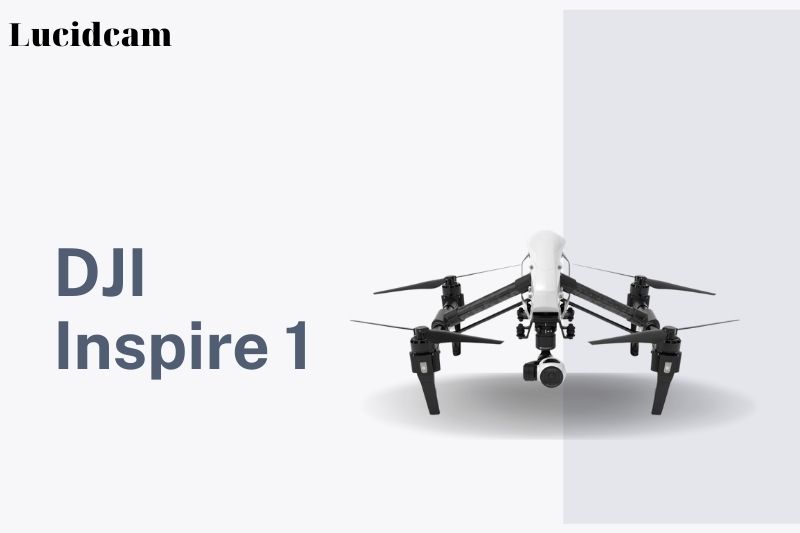 Even if drone flying is your normal thing, the Inspire1 can be terrifying. It is a combination of metal and carbon fiber with a lot of plastic. Even in flight, the drone almost looks like a robot killer machine. The drone’s camera has unobstructed views of the entire globe because it has moving arms that move when it is in flight.

Inspire 1 is a large UVA, which is much more powerful than other smaller UVAs. DJI even designed a large case for transporting and storing the Inspire1. This case will not fit into your backpack if you are going on a hike. 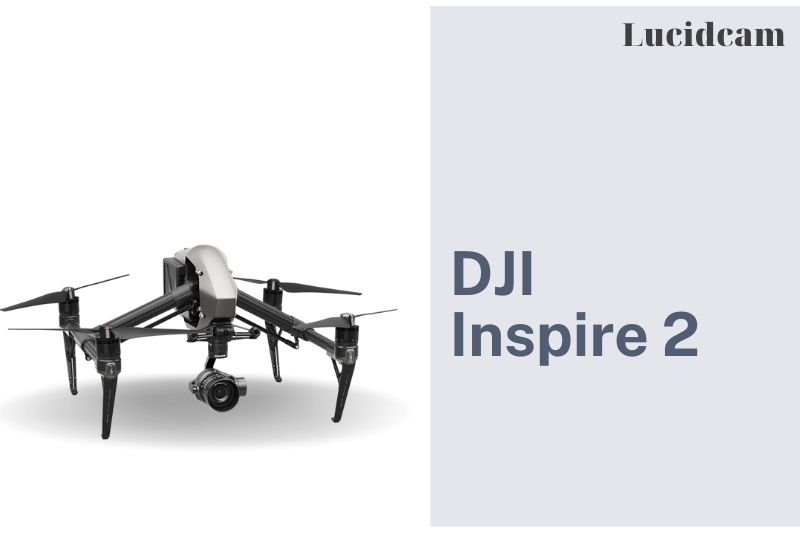 Inspire 2 has a unique and clever design. The Inspire 2’s low weight creates a pendulum-like motion that snaps into safe flight mode quicker. It is more wind-resistant.

The motors of the Inspire2 are more powerful and produce more torque. The dual battery system on the Inspire 2 allows you to fly longer (27 minutes maximum).

The protective layer around the drone camera is another useful feature. The Inspire2 is a great choice for people who live thousands of feet above sea level in places like Albuquerque (5312, 6800 feet), and Colorado (6800ft). High-altitude props can be used to extend your time 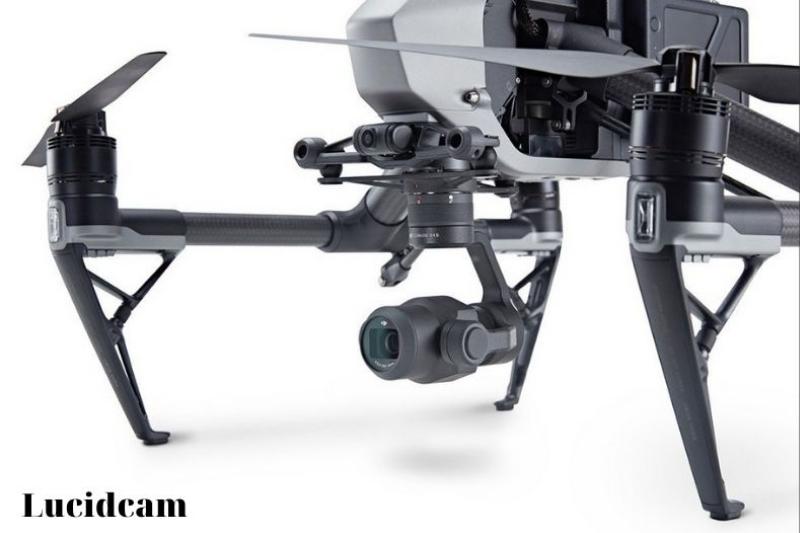 Each model comes with a downward-facing vision positioning system. This is only applicable when the drones are less than a meter from the ground. It allows drones to pinpoint their location using a variety of sensors. They can hover in one place without causing any displacement.

All drones have GPS and GLONASS positioning. They have access to all the satellites of Russia and America, which allows them greater accuracy than using GPS alone.

It also has the same maximum wind resistance. All Inspire models are capable of flying at speeds up 22.4 mph.

The Inspire 1, as well as the Inspire 2, are both stunning machines. However, they do have important differences. The biggest difference is the cost. The Inspire1 is $1999 and the Inspire2 is $2999. While the Inspire2 comes at a significant additional cost, the benefits it offers are worth the extra expense.

Is it worth the Inspire 2’s high price? Before you can answer this question, it is important to fully understand the cost breakdown of both drones. Two packages have been created for Inspire drones: a low-cost option, and a professional option. The results of our calculations about how much memory you need and how many batteries are required are not surprising.

The actual cost of an Inspire 2 is approximately $2,000-$3,000 more than the $1000 suggested by the price. You get a lot more with the Inspire 1 than you would expect, including a camera and all licenses that are required to use it.

An SSD Card and a second controller will cost you approximately $1,600 to allow for camera control with your Inspire 2. The Inspire 2 batteries are more expensive, but it is well worth the extra cost. You’ll soon find out.

DJI Inspire 1 Vs 2: Is Inspire 2 Worth the Extra Cost? 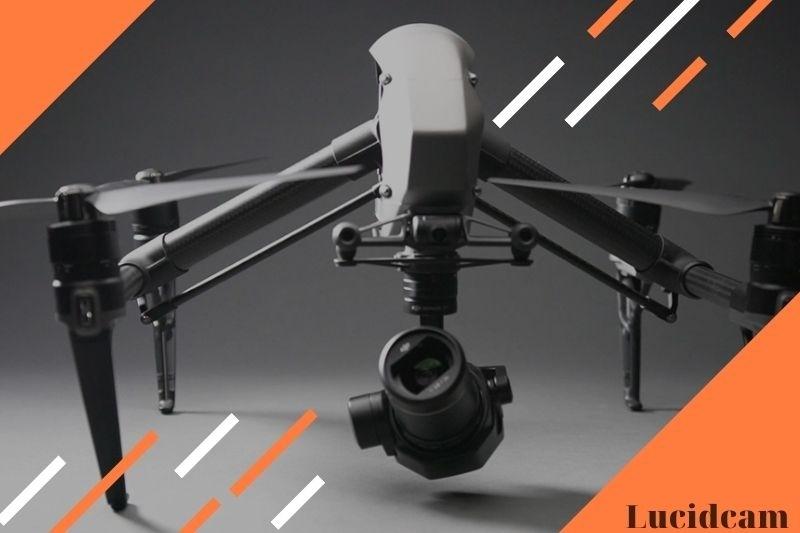 The Inspire 2 is quite expensive. This is why it remains a popular choice for pilots and small businesses. Let’s take a look at Inspire 2’s most important upgrades and decide if they are worth the cost.

Redundancy is the reason that Inspire 2 is less likely to lose control and fall from the sky. Your four-figure investment will be less susceptible to a single failure than if it has two batteries, two IMUs, and two barometers.

Inspire 1 is not known to have experienced widespread failures, but Inspire 2 has an incredibly high level of reliability.

The Inspire 2’s dual batteries have a hidden benefit: they are smaller. Each battery has less than 100 watt-hours of energy so you can bring unlimited quantities onto an airplane. This is an important advantage for drone pilots who need to fly by air. You are not allowed to carry spare Lithium batteries in your checked baggage. 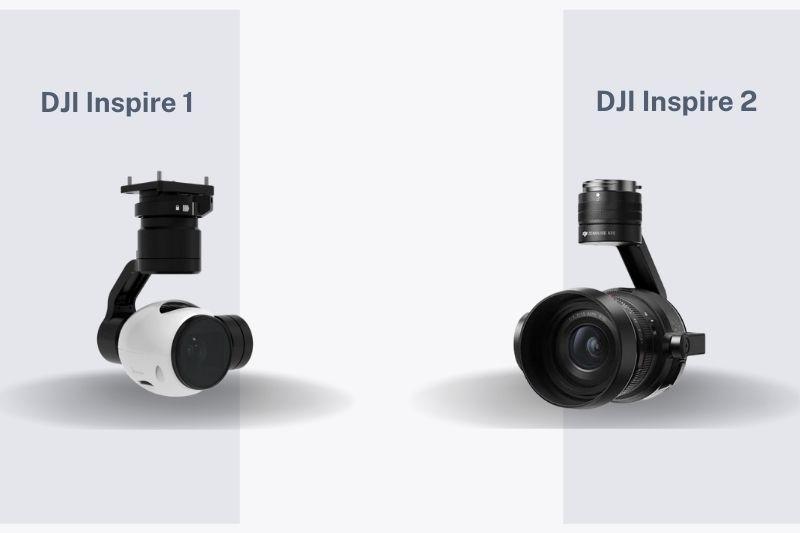 Both Inspire 1, as well as Inspire 2, have multiple camera options. The Inspire 1 camera can’t work with Inspire 2, much to the dismay of Inspire 1 owners. Inspire 2 cameras can’t be used on Inspire 1.

Although the X5R RAW-capable camera is the most expensive, Pros often require the ability to edit RAW footage. DJI doesn’t recommend the Z3’s 7X zoom for video capture. DJI states that there will be some camera shake when recording video.

The Z3 is an excellent lens for photography, and it’s also a favorite lens for rescue and search efforts. The X5 is a $1799 camera that does not have the RAW capability and the specialty XT thermal cam is also not included in this table.

The Inspire 2 features the X5S, the highest-quality cinematic camera. Surprisingly, the X5S is less expensive than the X5R on the Inspire1. The X5S is more powerful, has more pixels and supports 5.2K video and 4K video at 60 frames/second. Both drone cameras have micro-four-thirds sensors. However, the Inspire 2’s X5S features a 20 MP sensor.

The Inspire 1’s best feature is its ability to allow one person to fly the drone and another person to operate the camera. Both operators needed to be able to view the same footage from the camera. The Inspire 2 included a dedicated FPV camera with a 2-axis gimbal for the pilot. The pilot can now focus on flying the aircraft while the photographer can concentrate on taking the shot.

The Inspire 1’s flight time of 16 minutes was remarkable when it was first launched. This is no longer the case. This problem was solved by the Inspire 2, which can carry 2 batteries and can be hot-swapped. The Inspire2 can fly for 27 minutes. The Inspire 2 battery cost is significantly more but it is well worth it for the additional flight time and the ability to carry the batteries on board a plane when you travel.

The Inspire 1 is able to travel at 49 mph. However, the Inspire2 can go a staggering 58 mph. The Inspire2 has a sports car-like acceleration and can accelerate from 0-50 MPH in just 5 seconds. The Inspire 2’s larger propellers and stronger motors enable it to pitch forward faster than the Inspire 1 while reaching highway speeds.

It is hard to believe the DJI Inspire 1 has no obstacle avoidance system when the last 2 iterations of DJI’s general consumer drones, the Phantom 4, and Mavic Pro, both have this feature. Obstacle Avoidance prevents the drone from hitting people, buildings, or trees while it is flying.

The DJI Inspire2 takes obstacle avoidance to a new level. The Inspire2, unlike other DJI drones, has 360-degree obstacle avoidance. The drone can detect obstacles wherever you fly, so you don’t have to worry about it being sideways or forwards.

The Inspire2 features a Forward Vision System capable of detecting obstacles up to 30m ahead, whilst upward facing infrared sensors can sense obstacles at 5m.

Due to its ability to hold two fully charged batteries simultaneously, the DJI Inspire 2’s battery life is longer than the original DJI Inspire 1. The Inspire 1 had a battery life of 18 minutes. This was shorter than the DJI Phantom 4 or DJI Mavic, despite being twice as expensive.

The DJI Inspire2, unlike other DJI drones, has 360-degree obstacle avoidance. The drone can detect obstacles wherever you fly, so you don’t have to worry about it being sideways or forwards. 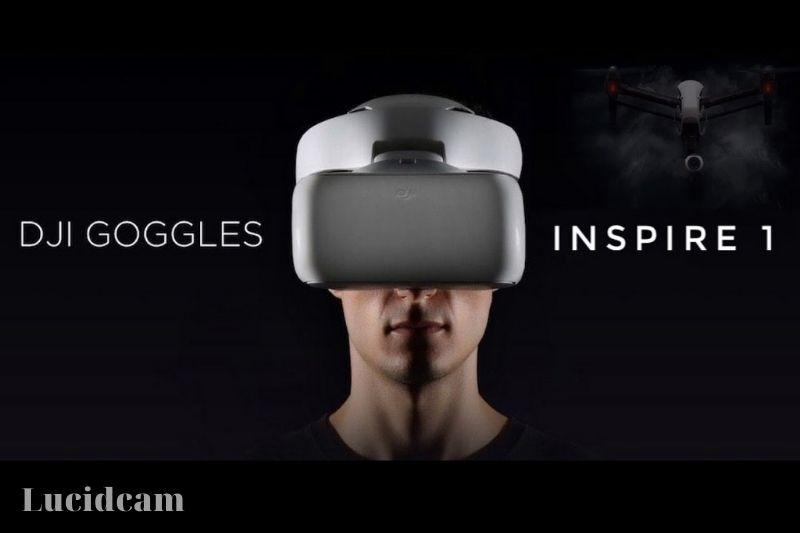 It is an immersive headset that lets you experience the flight of your drone. It is not compatible with the Inspire1 Pro or Inspires 2 Pro. The DJI Goggles are attached via USB to Inspire 2’s controller and relay imagery using its video downlink tech.

The DJI Inspire 2’s body color is sleeker than the Inspire 1’s glossy white. The matt black option is ideal for higher production as the shiny surface doesn’t reflect sunlight onto the set.

The DJI Inspire 1 flew at 49mph, compared to the DJI Inspire 2, which can fly at 65mph. The DJI Inspire 1’s launch speed was impressive, but drones like the Phantom 4 or Mavic can achieve comparable speeds at a fraction of their cost.

There are many intelligent flight modes available for the Inspire range. These include: 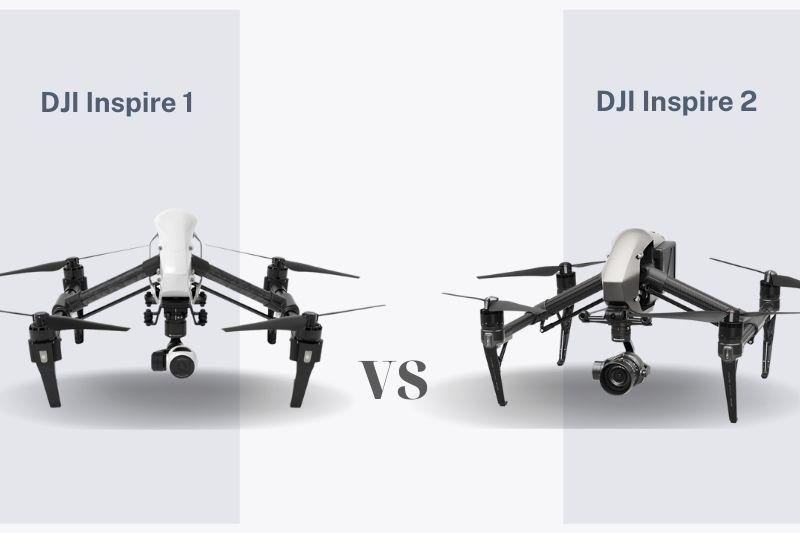 The Inspire 2 has two drawbacks: price and camera selection. Although the Inspire 2 doesn’t currently have a thermal or zoom lens option, these cameras will likely be available in the future if DJI is interested. The Inspire 2 is a winner on many levels.

The Inspire 1 is still a great buy, considering the many upgrades available to the Inspire2. An Inspire 1 is a great way to get respect if you’re tight on cash. Professional pilots will be less impressed if you bring a DJI Phantom to work. Although the Phantom 4 Pro has a better camera than Inspire 1, many customers will not know this. The Inspire 1 is a cheaper camera than the Phantom 4 Pro, but it has at least one additional advantage: you won’t see any props in your video. 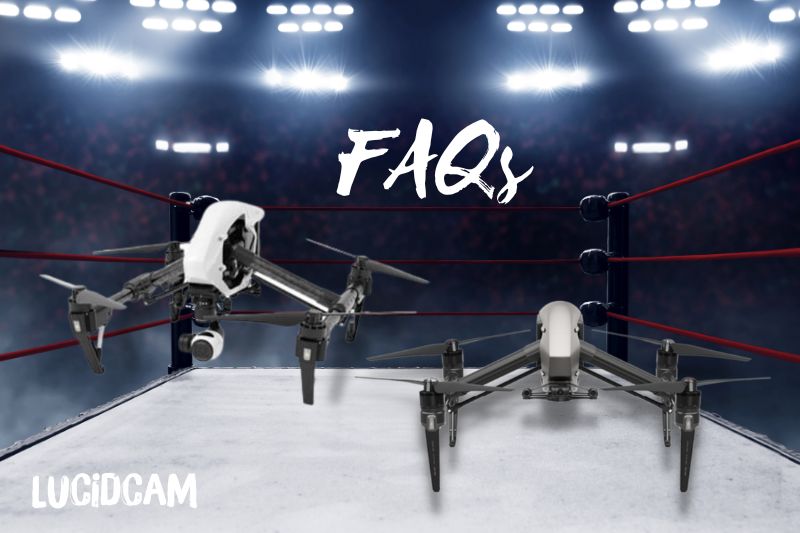 How old is the DJI Inspire 1?

When it was first released in 2015, CNET referred to the DJI Inspire as a “dreamy ready-to-fly 4K camera drone.” This description was given by CNET. And to tell you the truth, it’s a stunning air machine that was built from the ground up with photography in mind (it can even be controlled by two operators — one pilot and one camera operator).

Is the DJI Inspire 2 discontinued?

We received word that the DJI Inspire 2 will be officially discontinued as of February 2023. The DJI announcement was shared by various people on social media.

How long does the Inspire 1 battery last?

Battery life is the biggest concern with the Inspire 1. The included TB47 battery is rated for 18 minutes of flight, but I found that 15 minutes is a more reasonable estimate. The battery requires about an hour to fully recharge

When did Inspire 2 come out?

We hope this review is helpful for you. Please share this post if you found it helpful so that others might see its contents as well!

Let’s see our other article: