Both models have been discussed extensively, with many agreeing that they are great additions to the already extensive range of drones available for aerial photography. But since DJI Inspire 1, although older, is still a great model, the question arises whether the new ones really show any significant improvement in the overall performance.

Phantom 3 vs Inspire 1, which one is right for you?

In this blog post, Lucidcam will cover an in-depth comparison of two of the most popular drones on the market to see which one is best for you. 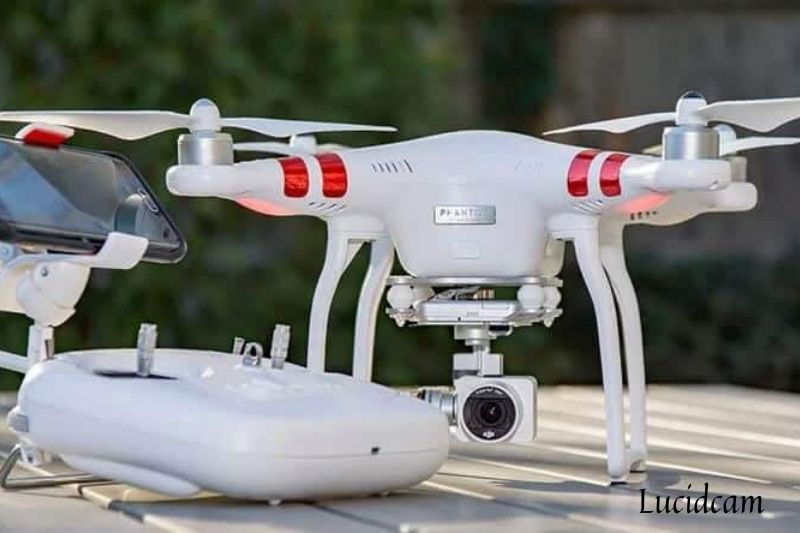 DJI is known for drones, like the Phantom 3 Professional and the Phantom 3 Advanced, both of which fly severe machines and carry serious price tags. The Phantom 3 Standard is an entry-level model that isn’t as polished as our all-time favorite drone, the Editors’ Choice Phantom 4. It doesn’t have the impressive operating range, collision avoidance system, or 4K recording offered by the Phantom 4.

Still, it does include DJI’s slate of safety features, automated flight modes and is no slouch when it comes to video capture, nabbing crisp footage at 2.7K resolution. It’s the best drone you can get for $500 or less and is our Editors’ Choice for aspiring pilots who need to stick to a tight budget. 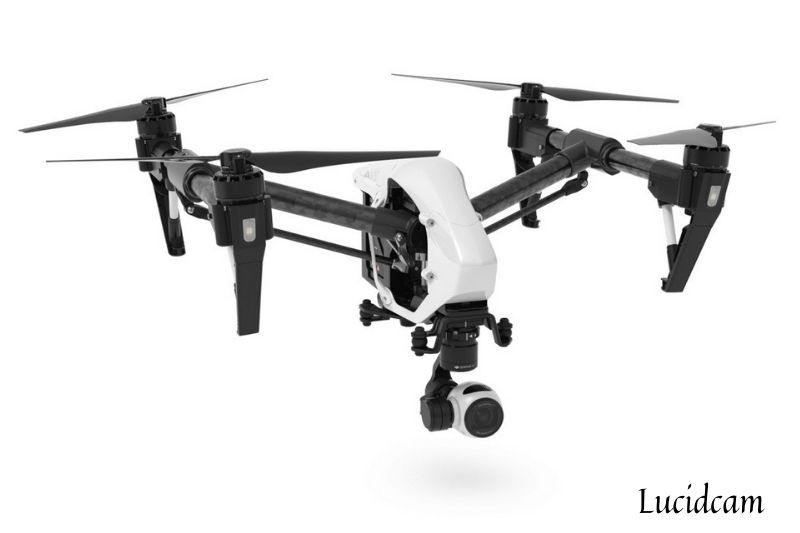 No matter how much fun 50 Cent makes it look to fly, the DJI Inspire 1 is most certainly not a toy. This drone is a well-crafted, serious piece of hardware that’s built for the long run. It uses carbon fiber materials and features an upgradeable 4K camera that can be removed and used to record handheld video. It’s not cheap, but for aerial videographers who need a bit more than what the Phantom 3 Professional offers, it’s a solid purchase and our Editors’ Choice for high-end drones.

Although you may believe that Inspire 1’s transforming design allows you to rotate the gimbal without being able to see the arms, it offers another benefit when the camera is pointed forwards.

Propellers can be your worst enemy when it is to aerial video. Ever wonder why drone footage is cropped at a large aspect ratio? Phantom pilots are more inclined to crop their videos or fly backwards. The reason for this is that propellers can sometimes appear at the top of your screen and cause blurred shots, especially when flying forwards.

The Inspire1 Drone’s transforming design means that it doesn’t have this problem in almost all situations. You can look up even if you are hovering or moving backward. This allows you to capture different angles to make your Aerial Drone videos stand out and give you a competitive edge.

The DJI Inspire1 Drone is the Lamborghini and Ferrari of Drone Video and Photo. While a sedan may be more cost-effective, it doesn’t make the Lamborghini or Ferrari less useful.

The DJI Phantom 3 is affordable and can shoot excellent videos. However, if you are looking for a professional video tool that will also deliver intangible performance and a low price, the Inspire1 Drone might be the best choice.

Although both drones have the same camera sensor and lens, there is one very big difference between the two drones. The inspire 1 camera can now be upgraded.

There are now three camera options available for Inspire 1 since the Inspire 1 Pro and Inspire 1 Raw was released. If you have the funds, the X3, X5, or X5R are all options. You have the opportunity to choose a consumer-level camera such as the Phantom 3 (X3) or a prosumer camera with similar video quality to the Panasonic GH4 (X5). Or a cinema camera capable of shooting 4K Raw for your highest quality productions (X5R).

The inspire 1 has incredible flexibility and can handle any shooting requirements. It’s also cheaper than an S1000 Octocopter, which currently does not support 4K cameras that shoot raw video. Besides, the Inspire1 has the ability to stream live HD video right to your smartphone from a distance of over a mile away.

Inspire 1 Pro can produce better video resolution. DJI also makes a mounting system that allows you to mount the X5R as a stabilized 4K handheld camera. 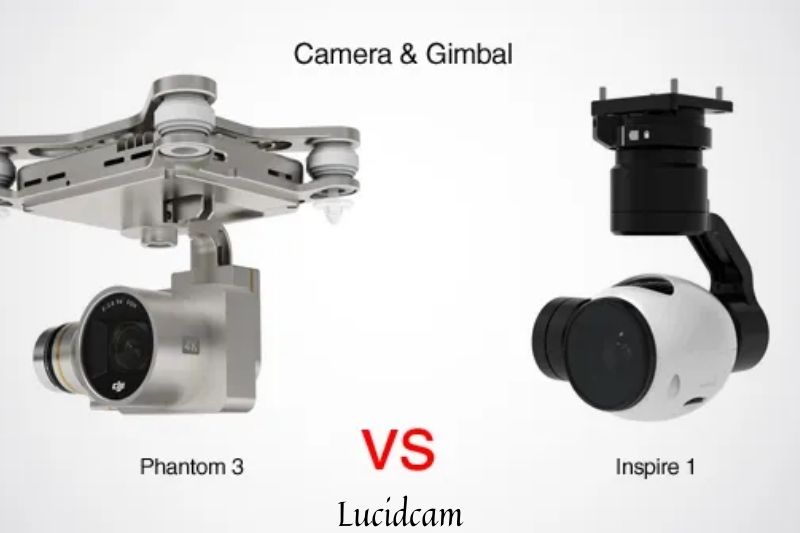 However, their gimbal systems are very different. Both can pitch at 30 degrees up and 90 degrees down. However, the Inspire1 model’s gimbal has a 320deg rotation and appears more secure, considering the Phantom’s open motors, exposed ribbon cables, and open motors. The Inspire 1 model also has a cooling fan, which kicks in as soon as it is set up.

The Inspire 1 can be flown by one person. A Phantom 3 requires another operator to operate the camera. This is, in my opinion, the most significant difference between Inspire1 & Phantom 3. Even if you only have one operator, it is nice to be in a position where the camera will not move and lock it. This is great if you prefer to fly forwards but want the camera pointing sideways or backwards. Although the dual pilot operation is more enjoyable than flying solo, it can sometimes be dangerous.

The Phantom 3 doesn’t have this problem. You are the only one who can control how the shots look. If you don’t like to plan your shots with Inspire 1, telling the camera operator what to do while you fly may be difficult. Although this is not a problem, it is something to be aware of.

The New Phantom 3 is a great drone to fly. Hovering would not be enough to tell the difference between the Inspire 1 or the DJI Phantom 3. It’s the easiest drone to fly thanks to its new motor design and optical flow stability.

Although the Inspire 1 is equally easy to fly, it is more dangerous and more extensive. The Inspire 1 has a larger motor, propellers, and a 6-cell lipo battery. It is speedy, agile, and stable, and can handle higher wind speeds without compromising video and image quality. With the new motor design and optical flow stabilization by DJI, it’s going to feel almost seamless to fly these Drones.

Although the Phantom 3 is easy to see at night, it can be challenging to see in daylight due to the location of the LEDs. The Inspire 1 is more extensive and easier to distinguish between the front and the back. The LED lights are brighter and face outwards, unlike the Phantom’s downward-facing ones. The Inspire 1 is a joy to fly at any time of the day.

Important information you don’t miss before flying a drone:

The Inspire1 is also more extensive than the Phantom 3 Drone. This drone is extremely heavy and has a lot of power. DJI Inspire1 Aerial Drone is capable of propelling its propellers at speeds close to 50 miles an hour. This is 15 MPH faster than the Phantom Drone Series, which can reach speeds of 35 MPH. Inspire 1’s top speed allows it to enter a new generation in drone filming.

Despite all its speed and power, the Inspire 1 Drone is still easy to fly even though it is faster and more dangerous. The Inspire1 Drone has a larger motor, propellers, and a 6-cell lipo battery. It is speedy, agile, stable, and can handle higher wind speeds with no loss of video quality.

Even with all that speed and power, the Inspire1 is just as easy to fly as the Phantom 3 Drone, but it’s bigger and more dangerous. With much larger motors, propellers, and a 6-cell lipo battery, the Inspire1 Drone is speedy, agile, stable, and can handle higher wind speeds without sacrificing video quality. 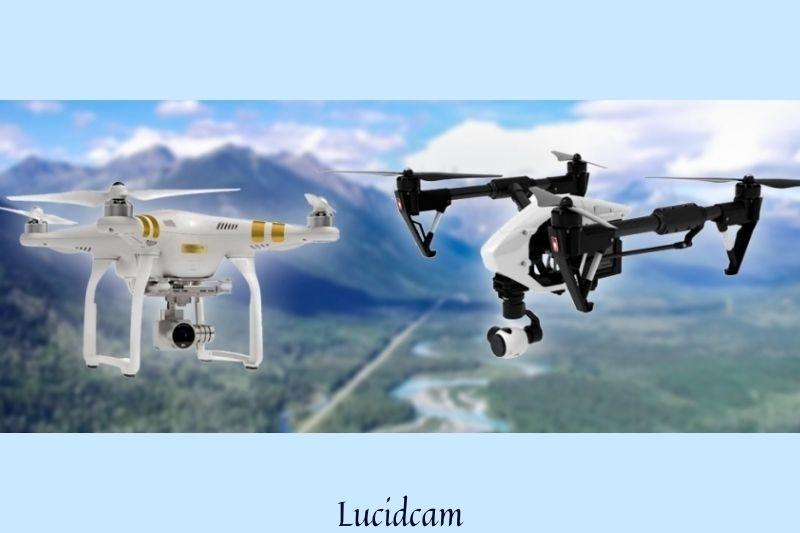 The Inspire uses 6 cells of lipo batteries for its power system, while the Phantom 3 uses 4 cells. Higher power delivery levels on the Inspire translate to improved wind handling, more incredible forward speed when fighting headwinds, and significantly increased speed for forwarding flight. You will need to decide if you think this is important.

The battery life of the Inspire1 and Phantom 3 is compared. One drone has a slight advantage over another.

The Phantom 3 gives you a battery life of 23 minutes per flight, whereas the Inspire1 gives you 18 minutes of flight time.

The Phantom 3 is a fantastic drone for beginners and advanced users alike. It has an impressive flight time, can live stream in HD, features Smart Shots to capture the perfect shot every time, and more if you are looking for something that offers just as much bang-for-your-buck with fewer bells and whistles than the Inspire 1 would be your best bet! I hope this article helped decide which drone will work best for you – please let me know if there’s anything else I can do to help make it easier on you!