There are many different GoPro cameras to choose from. GoPro’s Max and Hero 9 are two of the most well-known models. Max is for professionals, while Hero 9 is best for beginners. Which one is right for you? In this blog, we will be comparing the GoPro Hero 9 vs GoPro Max.

Both the Max and Hero 9 uphold GoPro’s long-standing heritage of high build quality in all of their products.

While durability is important, there’s a noticeable difference between Hero 9 and Max design-wise. The Hero9 has two screens and is the first GoPro model to have them.

The Hero 9 has two screens: one large screen at the front and one smaller at the back. This makes it easy to take selfies and vlog. Although the Max has only one large touchscreen, it is sufficient. It’s a 360 camera so you can be in the shot regardless of where it is pointed, eliminating the need to have another display.

The GoPro Max measures 64W x 69H x25D (mm) and is larger than any HERO action cam. It’s roughly the same width as the HERO 8 but is 20mm higher. The HERO 9 Black is 5mm larger than the HERO8 Black in all dimensions. The cameras all share smooth edges and a rubberized, grippy finish. They also have extremely sturdy construction.

All cameras are now frameless, unlike previous GoPro models that required mounting to a frame.

The GoPro Max has a single touch screen on the large display. However, 360 shooting is possible without worrying about where the camera is pointed. You’ll always be there in the shot. Both cameras have built-in GoPro Mounts and are water-resistant to 50m. 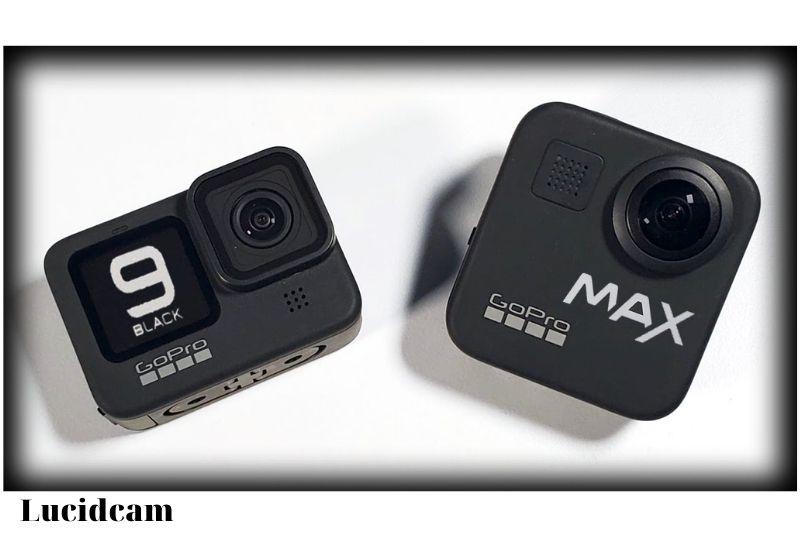 Bloggers should not use the HERO8 Black as it does not have a front-facing screen. You can purchase GoPro’s Display & Media Mods to attach a flip-up screen, but it is cheaper to buy the HERO9 Black with a front-facing view screen.

The twin-lens Max, like the HERO 8, Black, only has one touchscreen at its rear. You can flip between the views of either lens easily using the screen or the rear lens.

All three cameras can use many of the excellent GoPro software features, such as TimeWarp hyper-lapse video and HyperSmooth stability. The HERO9 Black is the latest version and offers additional functions.

They have HyperSmooth stability, but there is also in-camera horizon leveling. This is great for handheld filming.

The cameras can be used outdoors without the need for housing. The HERO cameras can be submerged to depths up to 10m. However, the Max camera is limited to submersion to 5m.

Technically, both GoPro Hero Max and HERO 9 Black can record 5K videos. The Max can only record 360-degree video at 5.6K, however. It offers a lower resolution in conventional HERO mode at 1140P at 30FPS and 1080P at 60FPS. The HERO9 Black is capable of capturing true 5K video at 30FPS, and 4K at 60FPS.

Although it has a lower standard resolution, Max’s 360-footage is truly eye-opening and offers huge creative potential. The Max captures the entire environment, not just what is directly in front of the camera. The 360 footage cannot be viewed using the GoPro app or VR headset. However, conventional video can be exported from the app with shifting viewpoints.

The stills aspect is a similar story. The Max can capture stunning 360-degree photos at 16.6MP. However, conventional photos only support 5MP. This is a significant improvement over the HERO 9 Black’s maximum resolution (20MP) 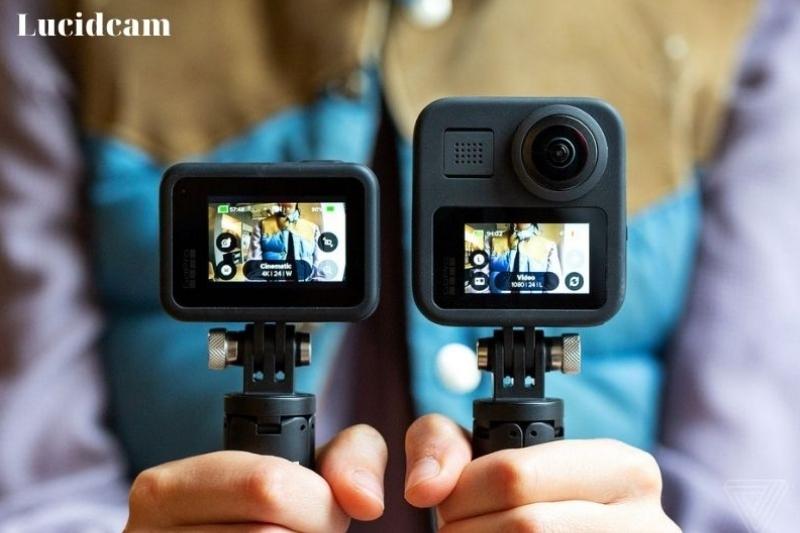 The Hero 9 is the first GoPro in the Hero range to shoot a 5K video. This is a significant improvement on the Hero 8 and allows for the highest quality GoPro video. The GoPro produces sharp videos, as evident by the clips that have been shot using it.

GoPro is known for its excellent color technology, and the Hero9 reaps the benefits. The camera has a high dynamic range and can preserve details. The Hero 9 is best at night, but it will struggle to capture good quality images in darkness. This is not surprising as action cameras use tiny sensors in their lenses.

You have creative control over how your video is captured thanks to the Hero 9’s many framerates and video resolutions. My personal preference is to shoot in 4K at 60fps. This is the best way I know to capture smooth-moving video with high quality.

This is possible with the Hero9, as well as super slow motion 120fps @1440p or 240fps at 1080p. Slow-mo is easy to capture and will look even better than any other phone’s photos.

The Hero9 also features a detachable lens for the first time. GoPro may release other lenses in the future that could add additional functionality to the camera.

The Hero9 has been a great little camera. I have used it since its inception. You have many manual options, and the final result is impressive for a small camera that fits in your palm.

The GoPro Hero Max is an entirely different beast, and in some ways, it’s even more impressive. Two lenses are used by the Max to capture 360 videos at 5.7K resolution. Although this resolution is greater than that of Hero9, the final result is not as sharp. This is because the 5.7K pixels must be spread out around 360 degrees, while the Hero 9’s 5K can fit into 120 degrees.

Although 360 videos may not be as sharp, it has huge creative potential. 360 video captures the entire environment around you simultaneously. It doesn’t matter if you point your camera at any action; it will capture it. 360-degree photography is a great way to capture every moment.

After you have shot the 360 videos, you can use the GoPro app to reframe the image (choose the point of the camera after shooting the video).

Although the Max can take more shots than the Hero 9, there is a substantial loss in quality. You can upload your 360 videos unframed and view them on a VR headset.

Hero Mode, which only uses one of the two lenses, is another model that the Max offers. It allows you to capture “normal” video with just one lens. This mode is great for those who want to combine 360 and standard video. It basically turns the Max into two cameras.

Hero mode can only capture 1440p @30fps and 1080p @60fps. Although the resolutions are not as high as in 2020, they are still sufficient if you want to shoot content for social media. 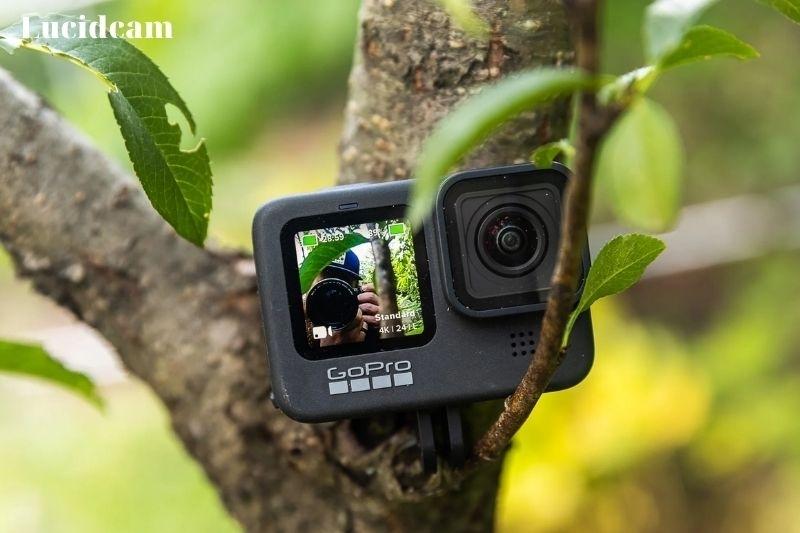 Although you won’t be purchasing these cameras solely for the purpose of taking photos, it’s nice to know that there are other options. The Hero 9 is clearly the best camera for photography in this instance.

There are several photo modes on the hero 9, including HDR and Raw, which can produce some really impressive images. It can beat a DSLR. It won’t, and in fact, some phones can out-shoot it. But, for quick shots, it’s not bad.

The Max is not as good as the Hero9, which lacks the same photo options. The GoPro Max has one advantage: it can take 360-degree photos, which is a lot of fun. I don’t use the photo mode very often.

An action camera is bought to capture amazing video while moving. You could use it for vlogging or daredevil stunts. These types of videos require stabilization. GoPro has developed software stabilization over the years so that you don’t have to buy extra gear.

Hyper smooth, the software’s name, allows you to take moving video without worrying about whether your video will not be viewable. Hyper smooth can be installed on the GoPro Max and Hero9, but they operate slightly differently.

Hyper smooth is the most recent version installed on the Hero9. It provides the best stabilization of any standard action camera. It smoothens out action shots amazingly well. I have tested it. It has a limit on what it can do. For example, spinning upside down can still produce some difficult-to-view video, but it generally works well.

GoPro has a special video mode specifically for action to get the best stabilization. This mode will decrease the video quality to about 2.7K, but it will give you a stabilization boost that can be used for extreme action shots. You will need to sacrifice smoothness if you want to preserve the best quality.

Although the Hero9 stabilizer is impressive, it cannot match the GoPro Max. Standard action cameras won’t be able to shoot moving video with 360 cameras. This is because 360 cameras have more footage. With software like Hypersmooth, even the most extreme action shots can look professional with a 360 camera.

The Max and GoPro Hero 9 both have a Timewarp video mode. This video mode is basically a moving timelapse, also known as a Hyperlapse. It was previously only available to productions with high budget budgets. Software stabilization can create it possible to achieve the same effect with cheaper cameras.

Which Should You Buy? 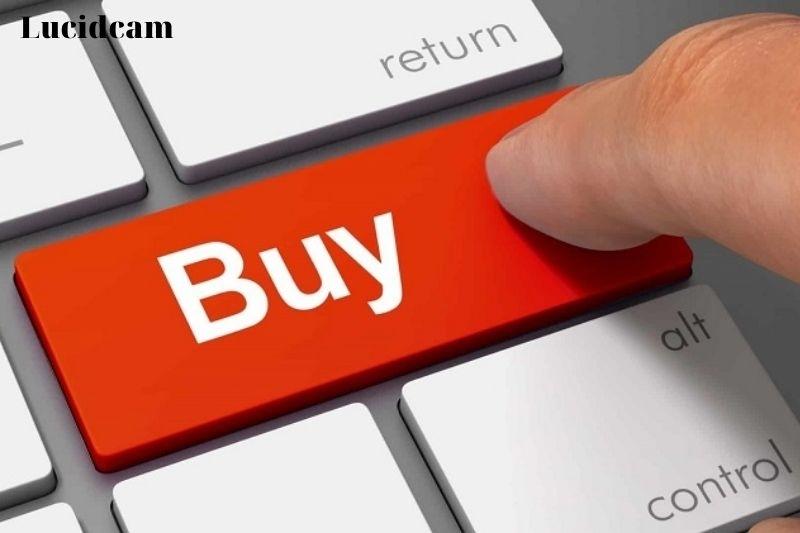 The Hero 9 and GoPro Max are like comparing a motorcycle to a car. Both can be great, but you will probably choose one. Hero 9 was designed to produce the best video quality, as I stated at the beginning of this post. The latest GoPro innovations such as Hindsight, multiple screens, and detachable lenses are all included. This is the most advanced GoPro camera yet.

The Max is an editor’s dream. You will spend more time using the app to tweak the video than you will actually be shooting it. The Max can take some really unique shots that aren’t possible using the Hero 9. They just won’t look as sharp.

We have the answer. Are you looking for creativity (get Max) or high-quality video (get Hero 9)? You’ll be impressed in either case, and GoPro is back on top.

How do you decide between the GoPro Hero 9 or the Max? The Hero 9 is the best choice if you are a big fan of specs and want to use the latest technology. It’s not only the best GoPro ever in terms of video quality, but it also comes with GoPro’s most recent innovations like detachable lenses and dual screens.

The Max is a better choice if you want an action camera that can help you express your creativity. The Max’s 360-degree view will allow you to capture unique videos that are not possible with the Hero9. In short both of them is flagship cameras