Looking for the best action camera that doesn’t break the bank? The Ion Action Camera is a great option. This camera is durable, easy to use, and captures high-quality footage. In this review, we’ll take a closer look at the Ion Action Camera and its features. 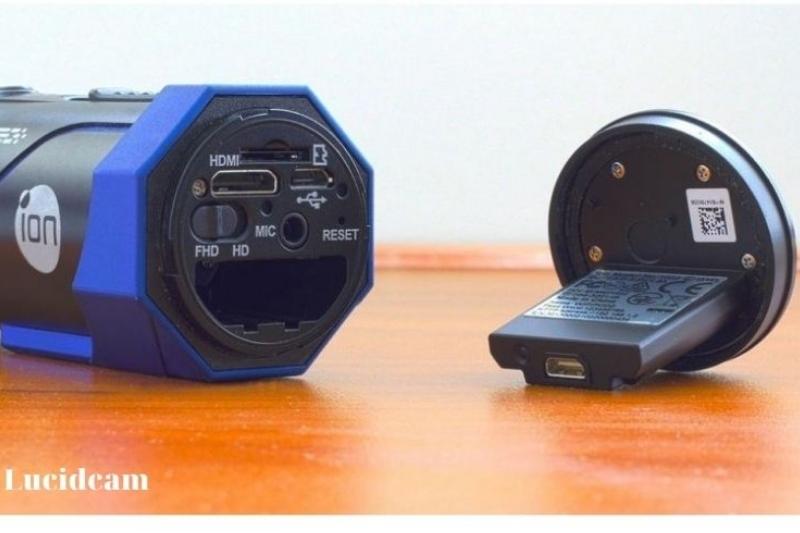 Although the Air Pro 3 has not been completely redesigned, it still features the same cylindrical shape as the previous models. However, the body is more durable and lighter at less than 5 ounces. The Pro 3’s waterproofing has been improved so that you can dive down to 49 feet, while the Pro 2 can only go 30 feet. It comes without any additional housing so that you can jump straight from land to sea without the need for additional equipment.

A 16mm f2.8 fog-free lens is visible in the front. This gives your videos a 160-degree angle of view. If that is too wide, you can reduce it to 140- or 150 degrees. Fixed-focus lenses are good up to 3.3 feet. You’ll need to leave some distance between your subject and the camera.

The lens features a fast Sony 12-megapixel BSI CMOS sensor. It is joined by a powerful processor, as you can see from the Air Pro 3’s recording capabilities.

The controls are the same as in previous models. To quickly start or stop recording, you can slide the switch forward. The body vibrates to inform you of what’s happening. The switch also has a power/shutter-release button.

The bottom has a metal tripod mount. However, iOn’s CamLock system uses a quick-connect clip to attach to a variety of mounts, including rollbars, boards, and goggles. Monoprice also uses this system for its MHD action camera. You can use it with this camera.

The Podz system that allows you to exchange rear caps is a key feature of iOn’s Air Pro camera models. The camera’s microSD card slot and Micro-USB ports, as well as the external mic jack and external mic jack, are covered by the cap. You can also add WiFi to the camera to make a wireless connection to your smartphone, tablet, or computer. The WiFi pods can be used to control up to eight cameras up to 60 feet from the camera. A basic cap is also available to protect it. 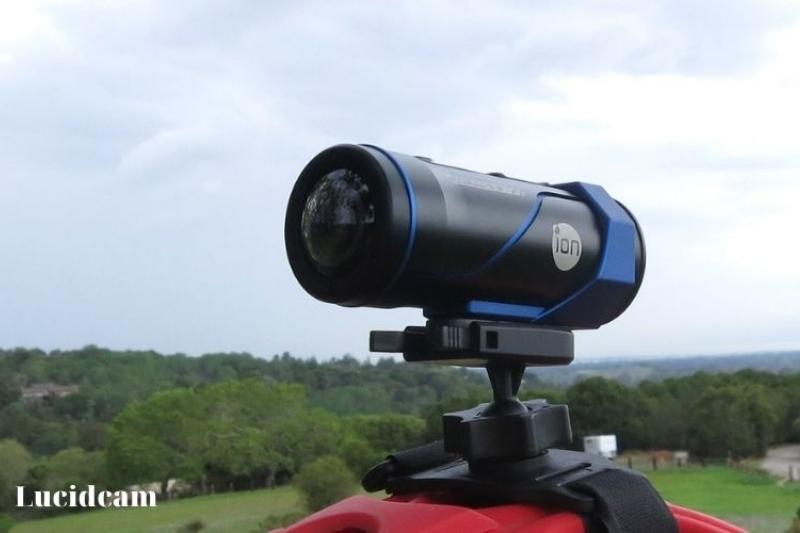 The controls on the iON AIR PRO 3 are limited to a power button and a sliding switch that starts the camera recording. The camera’s back has WiFi on the button. This is attached to an interchangeable back, which, once removed, exposes a USB port and micro SD card slot, HDMI socket, 3.5mm audio socket, and video quality switch.

The camera does not have a screen for setting up settings, unlike the GoPro. Most adjustments can be made by connecting the Air Pro 3 to a computer or using the app for iOS and Android. The modular back conceals a small switch that allows you to toggle between high (FHD) and low (HD) settings.

The app and computer can access the settings once they are saved. You can choose from a photo and video resolutions, as well as basic settings like date and time. FHD and HD switches on the back of your camera can set Full HD (1080p) at 30fps/60fps or HD position at720p at 30fps/60fps/120fps. The camera controls exposure, metering, and color automatically. There is no way to adjust them.

It’s easy to connect to the WiFi Podz: Turn on the device, turn on the WiFi Podz, then go to WiFi settings on your tablet or smartphone. Select the Podz network and enter a password.

You can download apps for Android and iOS to view your battery level. Both apps are not very attractive, but both were able to work on my Galaxy S4 and iPhone 5S.

You can change the camera settings using a desktop application. You can connect via USB to your Mac or Windows computer and launch the program directly from the camera’s memory. It’s not as beautiful as the mobile app, but it does the job.

Although the Air Pro 3’s full-HD video is excellent, it’s not as good as the Air Pro 2. Although it’s more impressive in low light, it is not enough to justify an upgrade. The faster frame rates will be a benefit to upgraders, which can smooth out slow-motion and fast-moving subjects.

The colors are bright and pleasant, and exposure changes can be made quickly and smoothly. One complaint I have is that the scene looks a little soft on large screens. This is a minor issue, but it’s important to note if you are using the camera to create Web videos. The results look great on small monitors, tablets, and smartphones.

The video that has been shaken a lot looks a little jello-y. This is normal for this category, but it’s not terrible. Although low-light videos aren’t as loud as those from Air Pro 2, the noise reduction makes scenes seem very soft.

Although the camera has a mono mic built-in, it is not good enough to capture audio close to the camera. An external microphone will provide the best sound quality.

The Ion Air Pro 3’s battery cannot be removed. This is a good thing as it allows the camera to be small and waterproof without an additional case. However, you cannot swap out a spare battery in case you run low. You may not need any more than the 2.5 hour minimum of 1080p/60fps video. The Kodak Pixpro SP1 can be used for just 2 hours and 10 minutes at 1080p/30fps.

The MicroSD card slot can accept chips up to 64GB. This will provide enough storage for approximately 4 hours and 20 minutes of 1080p/60fps videos. 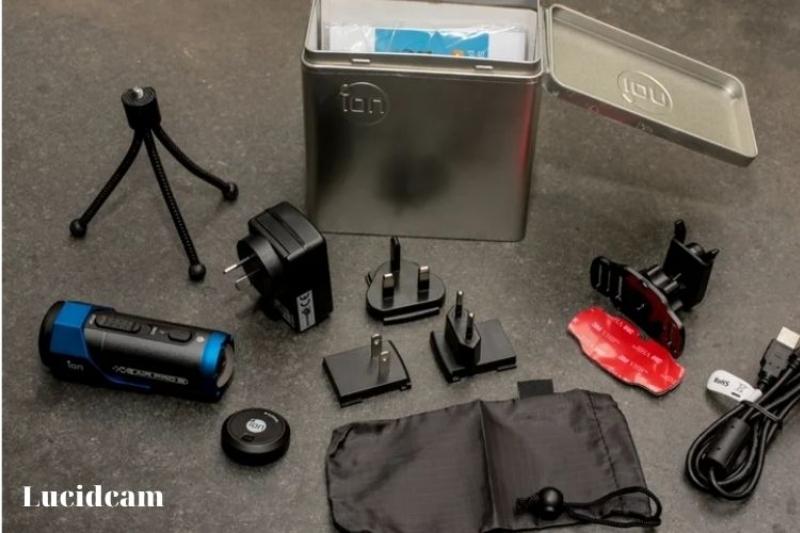 The Air Pro 3 chassis has a screw hole that can be used to mount a tripod. This includes the basic tabletop model included in the box. The bracket attaches to the mount to allow the camera to lock into Ion’s mounting system. This includes the included bike helmet mount with a locking joint to allow for wide-angle angling. The mounting system positions the camera quite high up, so be careful not to catch it on low branches.

The camera can capture stills at 12Mp resolution and 5MP resolution while maintaining a 4:3 aspect ratio. You can choose between burst and time-lapse modes, with an interval selection of 30, 60, or 30. For the first case, it will be 10, 5, and 2, and 10 shots for burst mode. 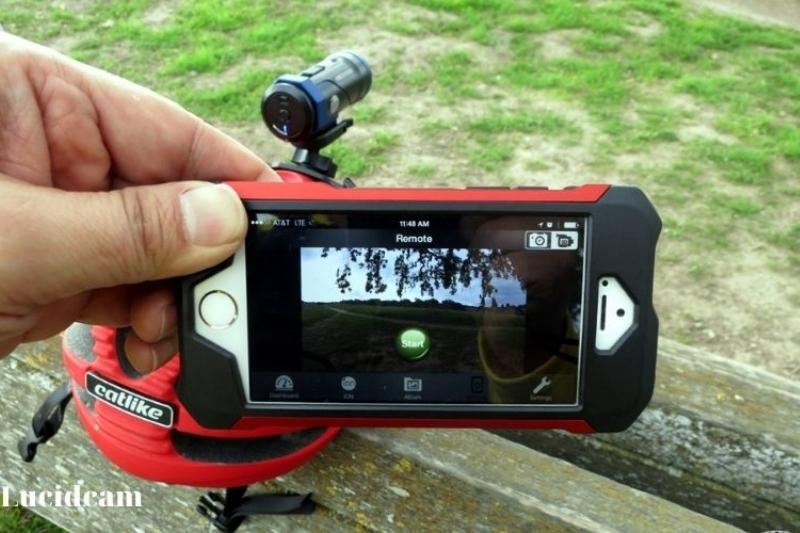 iON’s minimalist approach to control layout continues with its latest Air Pro model. The buttons that control most functions include Power, Photo Capture, and a large switch for Start/Stop video recording.

Although they might look bulky in photos, both the button as well as the switch provide better feedback than the smaller buttons from their competition. Instead of having to navigate through confusing menus on a small display like GoPro, you can only change the resolution from the camera. This should be sufficient for most adventurers.

You’d expect other configurations to be possible with this Wi-Fi-enabled action cam without a display. However, iON’s mobile app can allow you to make them from your mobile device. The iOS and Android iON apps lack functionality and are poorly designed.

The remote function worked in my tests, and the playback was choppy. The only options that are available to you are Photo Resolution, TV Type and Power Savings, as well as Auto Rotate. There is no way to know how much space or time you have on your microSD card.

You will need to install iON’s desktop software on any microSD card that you use with your Air Pro 3 to make video recording adjustments. From the software, you can set FHD mode to record 1080p video at up to 60 frames per second, and HD mode can be set to record 720p at 30, 60, and 120-frames-per-second for slowing down footage in editing for dramatic slow-motion scenes.

You can also go down to 240p (WQVGA or QVGA) at 120 frames per second. You can only switch between photo modes (Still Time-Lapse Burst), but this is only possible via the desktop software. We were reassured by iON that they are working to improve the apps.

The Ion Action Camera is a great camera for capturing your outdoor adventures. It is small and lightweight, making it easy to take with you on the go. The camera has a good battery life and produces high-quality video. The only downside is that it is a bit pricey. Overall, the Ion Action Cameras are a great option for anyone looking for action cameras.