Do you want to film an amazing video without any additional tools? DJI created the Osmo Mobile 3 to make your life easier. It is portable and has a battery life of up to 10 hours. The camera comes with a fisheye lens, two zoom lenses, a camera holder, a tripod mount, a charging cable, a tripod screw, a lens cap, a lens bag, a carrying case, a wifi extender, a manual, and a warranty card. In this blog, we will review the DJI Osmo Mobile 3 and see what it has to offer.

Your phone’s camera is quite good and can even shoot 4K video. Camera movement is the greatest challenge in getting professional results with your phone’s camera. Poor handheld footage is not going to cut the mustard. The Osmo Mobile3 is a handheld gimbal with smooth shooting and the ability to track subjects.
DJI continues to improve its phone gimbal design. It’s more flexible, simpler to use, and cheaper than Osmo Mobile 2. It is an excellent replacement for its predecessor and sets a new standard in the category with its reliable Bluetooth connection and easy switching between landscape and portrait orientations. 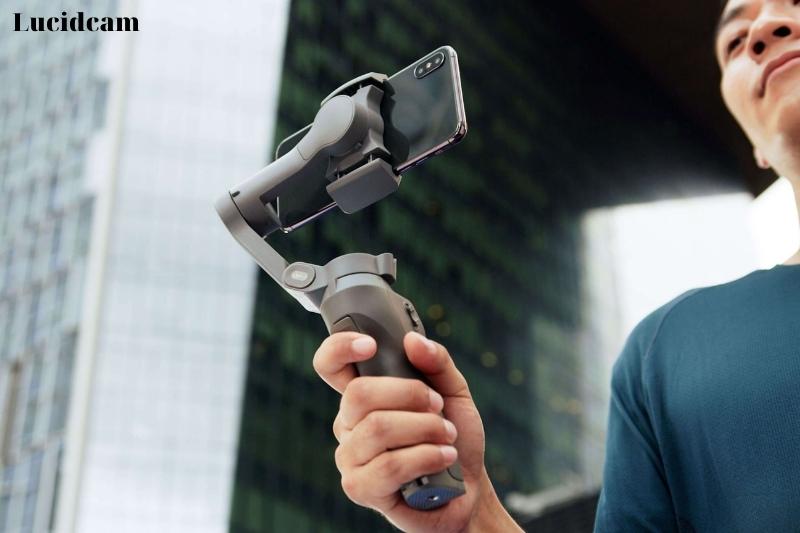 The application is available for both Android and iOS. It interacts with your smartphone’s camera so that you can take a photo, zoom in, or start recording. You can also access advanced options such as timelapse, hyper-lapse, panorama, and a Story mode.

The story modes can be really fun. It turns a few guided shots into a montage with music. Pro filmmakers might not be able to take advantage of this feature, but it is a wonderful marriage of hardware smarts and software smarts that creates simple, engaging nuggets full of joy.

Double-taps of the M button switch between landscape and portrait orientations. Three taps charge the Osmo Mobile 3 arm between its starting position and its stowing position. A single tap of the M button will turn on the four LEDs at the top of the joystick and give you a battery reading.

The trigger is simply held to lock your phone’s direction and make the gimbals ultra-fluid. This can be used to create crane-like swoops or for manually tracking fast-moving objects. Double-tap on the trigger to reset the gimbals so that your phone faces forward. 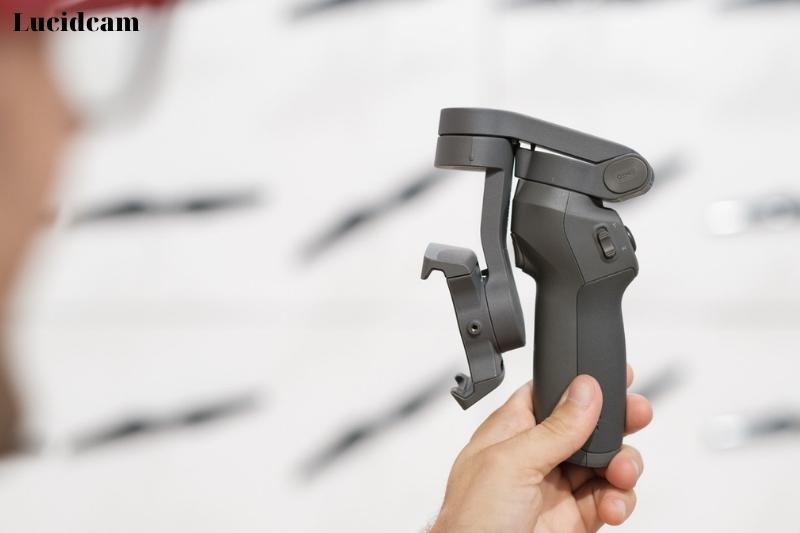 First, the Osmo Mobile 3 folds up into itself to make it more portable. This only requires one joint, and all other axes of the gimbal remain intact. If the tripod base DJI includes with the combo package, the folded gimbal will be slightly larger than the average hand. After I had figured out the orientation of the arm, I was not bothered by the design change. It seems like a useful update that makes it more compact.

Foldable designs are possible due to a second and perhaps more important design change: the sideways orientation for the phone-holding arm. DJI has placed the arm to the right side of the device rather than behind it. This is a departure from the standard design found in most smartphone gimbals.

Gimbal operators who are used to the standard back-arm design will need to adjust their muscle memory. It was most evident for me when I attempted to get shots closer to the ground. To achieve the same effect, I used to lean the gimbal forwards and away from my body. However, with the DJI Osmo Mobile 3, it has to be leaned to one side.

The Osmo Mobile 2’s arm location was a common complaint. It blocked the phone from its headphone jack or charging port. Sideways arms on the Osmo mobile 3 solve these problems and allow access to both. The only downside is that the phone must be balanced every time it’s placed into the gimbals. Because the Osmo Mobile 2 used counterweights, users could use their phone without having to adjust it each time they wanted. Although the Osmo Mobile 3 does not offer this option, it seemed that balancing the phone along one axis was a very easy process.

DJI also added a trigger at the back of its gimbal handle. This is a great addition. This allows you to access useful functions at a location that is ergonomic. The trigger can be clicked or held down to activate sport mode’. This makes the gimbals more responsive depending on your movements. You can also use it to pause the responsiveness of the gimbals completely, useful for framing. 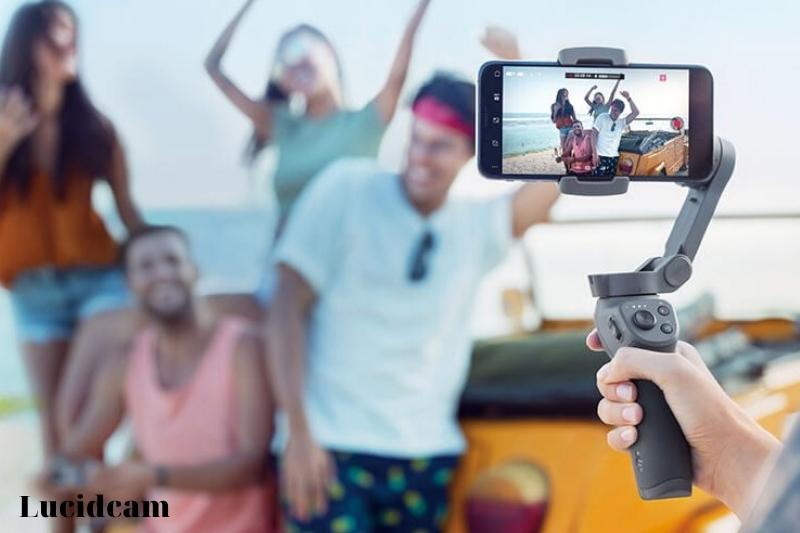 Although the hardware of the Osmo Mobile is amazing, the main thing I love about it is the DJI Mimo software. It’s easy to capture great videos even with a smartphone, thanks to intelligent features such as ActiveTrack and Hyperlapse.

ActiveTrack is a great app. The application is easy to use. All you need to do to track an object is to tap and drag the box over it. It was able to handle situations such as locking onto an object and moving around it and locking onto a moving object, which the app tracks.

ActiveTrack was able to track almost everything except my children’s running and cartwheeling around the room. They were too fast for ActiveTrack. To capture this, I switched to Sport Mode by long-pressing the trigger twice, then releasing it again for a few seconds. This speeds up the gimbals so that you can manually pan faster, but it does not have the ActiveTrack auto-follow feature. Sport Mode can be a great asset once you have mastered the gimbal. It’s also great fun to use Hyperlapse mode. You can create time-lapse videos even when you are in motion.

There are a few other features in the application, such as Story Mode, which allows you to quickly create videos using pre-set templates with matching music and a panoramic mode that takes multiple images and stitches them together into a 180-degree and/or 330-degree image.

You can also use the application to control your gestures, which is very useful for recording yourself. Osmo Mobile bundle packages include a small tripod that allows you to move out from behind the camera using a hand gesture. This will allow you to take photos or record videos. The gimbal will track your movements.

The Osmo Mobile 3 has more software and hardware features than other models. It is smaller and easier to use. The only thing I have is the fact that 60 frames per second are not possible with iPhones. However, this is less of an issue with Android phones. 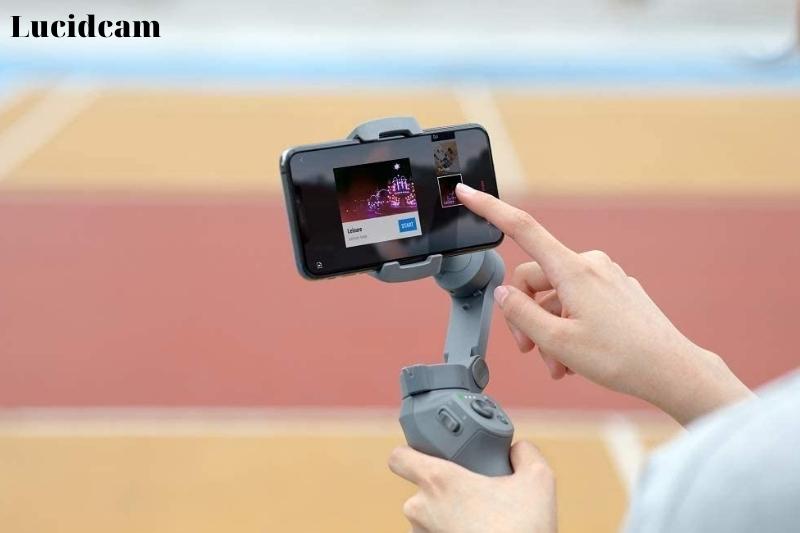 We were able to isolate stabilization offered by Osmo Mobile 3 using the Sony Xperia 1 with Cinema Pro turned off by default. It’s amazing; even heavy steps can feel light and floaty thanks to the gimbals.

The main problem with footage is the Mimo App’s video quality. This is especially true for Android phones. The sample video shows that it did not expose the selfie for the face. It also overexposed the video and focused a lot. We used the camera app on our phone to get better results in difficult lighting situations. However, it does not have an AI track.

The application can be used in normal lighting conditions and locks onto a face. You can also use the beauty mode to reduce wrinkles, brighten your eyes, smoothen skin, or even make your teeth whiter.

The Osmo Mobile 3 can be combined with AI tracking to make it a great tool for self-shooters. To start it up, give it a peace gesture, and it will lock onto your device after a three-second countdown. It can be used handheld or mounted on a tripod and does an excellent job following you around.

It is not as easy to track more difficult objects like the tree in the sample video. However, it was possible after several attempts. Drag objects that don’t have faces across your screen, focusing on the object you wish to track. The Mimo application will then create a frame and lock onto what’s within it. 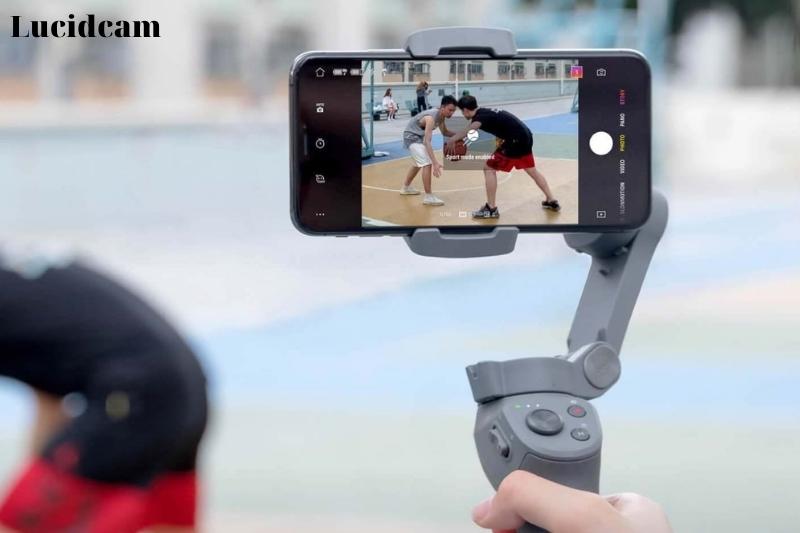 The Osmo Mobile 3 has a similar design to the Osmo Mobile 2 and offers the same battery life of excellent quality with a quoted on-time 15 hours.

The batteries can’t be removed, as it was with the predecessor. However, that shouldn’t stop you from using it. The Osmo Mobile 3, which we used as both a gimbal as well as a kickstand, was charged twice during our week.

A full charge can take around two hours if you are worried about heavy ‘gimbaling” for prolonged periods of time. Consider adding an overnight power-up to your plan if possible.

It is worth noting that Osmo Mobile 3 can get in the frame if you use ultra-wide cameras like the one on the Xperia 1. However, this was not an issue with Huawei P30 Pro’s ultra-wide shooter.

This issue is only with a handful of smartphone gimbals. If you’re interested in ultra-wide videography and have the chance to test it before you buy, we recommend that you do so to make sure the Osmo Mobile 3 works well with all your phones’ cameras.

DJI Mimo, which connects your phone to the gimbals through Bluetooth, now supports gesture-based tracking. Just raise your hand, or make a peace sign using your fingers, and the three-second timer will start. This will begin the recording. It keeps the person in the frame no matter how fast they run around. You can draw a box around any object by using the screen of your phone.

Unfortunately, the Mimo app has very few other features. Android users are limited to recording at 30fps. The iOS app is able to record at 60fps. If your phone has multiple rear sensors, you cannot switch between the cameras.

Although the app allows you to adjust exposure levels you cannot alter camera-specific settings like ISO or white balance. You can however adjust certain settings of the gimbals, such as zoom sensitivity and panning speed.

The DJI Osmo 3 gadget is a great tool and must-have for serious content creators. It’s an excellent accessory for anyone, even casual users. It is simple to use and can help make even low-end smartphones look professional. It folds up very compactly, and we love the subject tracking feature that works well on people. The Mimo app also offers many useful shooting modes. DJI will update the app to allow for more framerates and resolutions on a wider range of Android phones.