Two of the market’s most popular virtual reality headsets are Samsung VR vs Google Cardboard. While there are some parallels between the two, there are also some significant distinctions.

Let’s compare Samsung VR with Google Cardboard side by side.

Cardboard VR is one side project. These projects aren’t considered to be important or have limited resources and are granted to them. Google’s side project was a huge success and attracted many customers around the globe.

At only 20 dollars, this headset is the most affordable on the market. Google cardboard’s design is open-source, so anyone can build one at home by following a few simple instructions. Google’s vision for technology that is accessible to all is a reality and Google Cardboard is one of the first steps towards this goal.

Gear VR is the result of combining the best Virtual Reality Company expertise with the best smartphone brand in the world. Gear VR is a collaboration between Oculus and Samsung.

The virtual reality headset can be used only with Samsung phones. It retails for around 100 dollars, which is nearly five times the price of cardboard. Gear VR has many functions.

It comes with a phone stand that can hold any phone. The headset connects to your smartphone via the charging port. Once the phone is connected, it launches the VR software. This headset allows you to adjust the volume and zoom. The Oculus app, which is available on the Gear VR app store, allows you to play many VR games.

What is Samsung Gear VR?

You will pay attention when one of the most prominent names in virtual reality joins forces with one of the largest smartphone manufacturers in the world. The Gear VR was released by Samsung in two versions: an “Innovator Edition” and a consumer version in late 2014. It is both innovative and sophisticated in its design.

What is Google Cardboard?

Google Cardboard, one of Google’s side projects, is a low-cost VR tech that anyone can build and buy. This budget-friendly VR tech transforms an existing smartphone into a virtual reality device.

Google’s Cardboard VR paper-made technology allows users to experience virtual reality on any smartphone, without needing expensive hardware. The Cardboard’s portability is great and anyone can purchase it. It also works with all phones. The Cardboard does not offer any extra features such as volume control or flap straps, like other VR headsets. However, it is only $20 and you get the best VR headset.

How do They Work?

Both display using a smartphone and lenses that fill the entire screen. The display can be updated by a Virtual Reality app using the phone’s sensors.

There is not much difference between the Samsung VR and Google Cardboard. Both virtual reality headsets allow users to experience immersive, three-dimensional environments.

However, the Samsung Google VR uses higher-quality materials and lenses and has a built-in accelerometer and gyroscope for more accurate tracking. Additionally, the Samsung VR comes with a controller, while the Google Cardboard does not.

Samsung VR vs Google Cardboard: What is The Differences?

Samsung Gear, the high-end VR headset created by Oculus, and Samsung is the undisputed king in VR. This VR technology is revolutionary. It combines a lightweight wireless headset with Samsung’s new flagship Galaxy smartphones with new head-tracking technology.

Google Cardboard is a budget-friendly, VR tech that Google developed as a side project. It transforms an existing smartphone into a VR device. 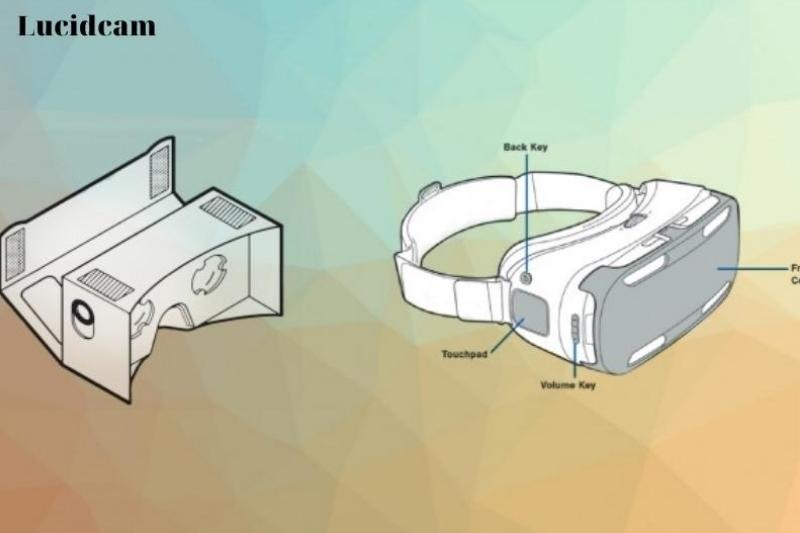 Samsung Gear, an Oculus-powered VR headset, is revolutionary. It combines Oculus optics and new features to create a truly immersive virtual reality experience. The Gear VR’s best feature is its new lens that has a wider field of vision.

Google Cardboard is a basic and budget-friendly VR headset that Google developed. The best thing about the Cardboard? It works with almost any smartphone and is really affordable.

Features in Gear VR vs Cardboard 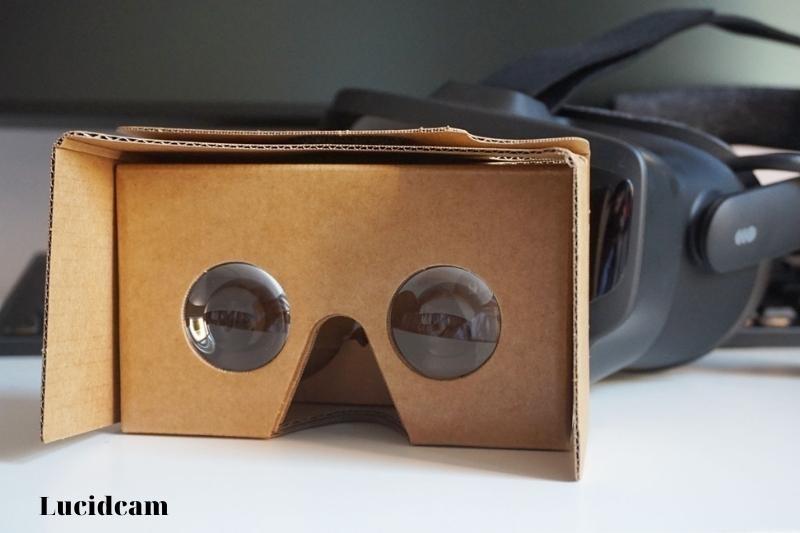 Oculus technology was integrated into the Samsung Gear through a thoughtful partnership with Samsung. This combines Oculus tech with all the conveniences of the new Galaxy series smartphones. The Samsung display is stunning and there are many intuitive input controls such as volume control, headphone Jack, trackpad, and eye-adjustment diopter wheels.

Google Cardboard is a reference specification that you can create on your own to immerse yourself in a VR experience.

Pricing for Samsung VR vs Cardboard 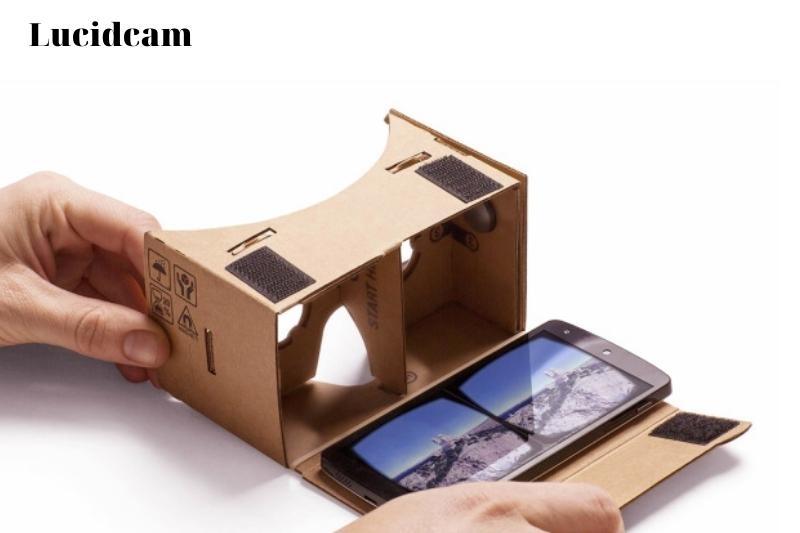 Gear VR, a revolutionary mobile virtual reality headset from Samsung, is packed with amazing features that will blow your mind. However, quality comes at a cost. The Gear VR retails at $129.99

Google Cardboard is a basic VR system that is made from paper and costs only $20. This is the most affordable VR system that anyone can buy or build.

Cardboard will work with almost all smartphones, unlike the Samsung Gear. We believe that the Gear VR experience is closer to those of higher-end smartphones.

A smartphone with an older Cardboard design will have a smaller screen and respond slower to head movements, which makes it less immersive. No matter what platform you use, your first experience with VR is always jaw-dropping.

Should I Choose Samsung VR Or Google Cardboard?

The VR system Gear VR is reliable. It can actually produce a convincing virtual reality illusion that is much more stunning than what you can see and hear with Google cardboard vr.

While positional tracking is absent from the Gear VR, it is still more readily available, portable, and less expensive. The fact that third parties widely support it and that there are more and more apps is crucial. 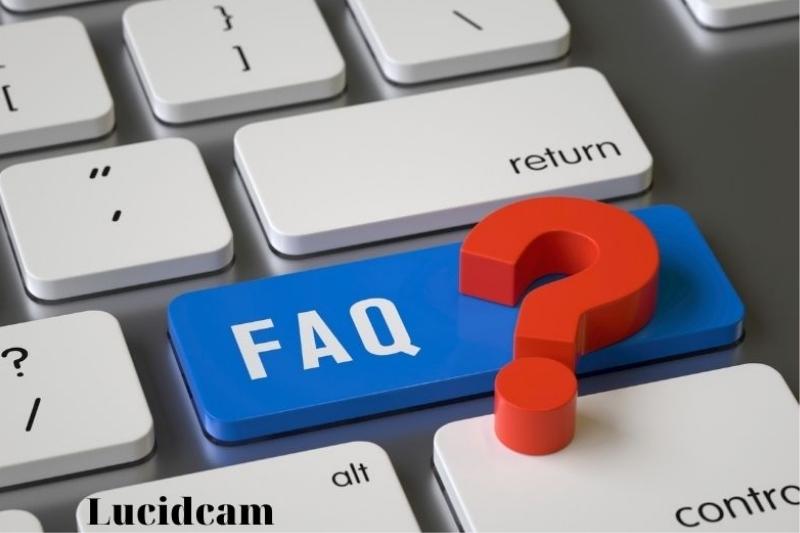 Is Google Cardboard compatible with Samsung?

Cardboard can only be used with Android phones that are 4.1 or higher.

What are the uses of Gear VR?

Gear can I use Oculus without Oculus?

Disable any Oculus app, and enable the Gear VR Service developer mode. Do not disable Gear Service Package. This guide will show you how to connect your Samsung Gear HMD to the Samsung Gear HMD.

Is Samsung VR compatible with other phones?

Although the Samsung Gear is capable of working with any Android smartphone, other than the Galaxy Note 4 we are unable to say that it is a worthwhile experience. … Oculus software, which comes with the Note 4, is the real value.

How to turn your phone into a VR headset for PC?

To begin with, you’ll require an application that connects your phone and computer. We’ll be using Microsoft’s own software, Your Phone, to complete the task for this tutorial.

You’ll also require a tool that enables you to apply Windows overlays to your VR environment. If you have your own software, feel free to use it in place of XSOverlay for this lesson.

How to make my phone VR compatible?

Any Virtual Reality app can be found, downloaded, and installed. Open them to see two screens; now, move your smartphone in any direction (left, right, ahead, back). Virtual reality is supported by your smartphone if the screen is moving.

There are two different kinds of virtual reality headsets: Samsung VR and google cardboard. Although they have different characteristics, they are both designed to give the user an immersive experience.

While google cardboard is more accessible and made for any phone, Samsung VR is designed for Samsung phones and offers superior visuals. These are the two best VR headset types to utilize if you’re interested in using one.

Lucidcam sincerely hopes you find this post to be useful. I’m grateful you took the time to read it.