You may have noticed that the terms quadcopter and drone are frequently employed when talking about recreational drones. There may be situations when these terms are used interchangeably.

Any unmanned aircraft without a driver or pilot is referred to as a drone. A drone is any vehicle that has the ability to operate on land, water, or the air. A quadcopter that can fly with four rotors is referred to by the more precise and specific term quadcopter.

Although the terms “quadcopter” and “drone” are technically correct for unmanned recreational flying aircraft, they may be misunderstood.

To avoid confusion and choose the ideal recreational drone for your purposes, it is possible to understand the distinction between a quadcopter vs drone. In this blog, we’ll make it clear what it is. 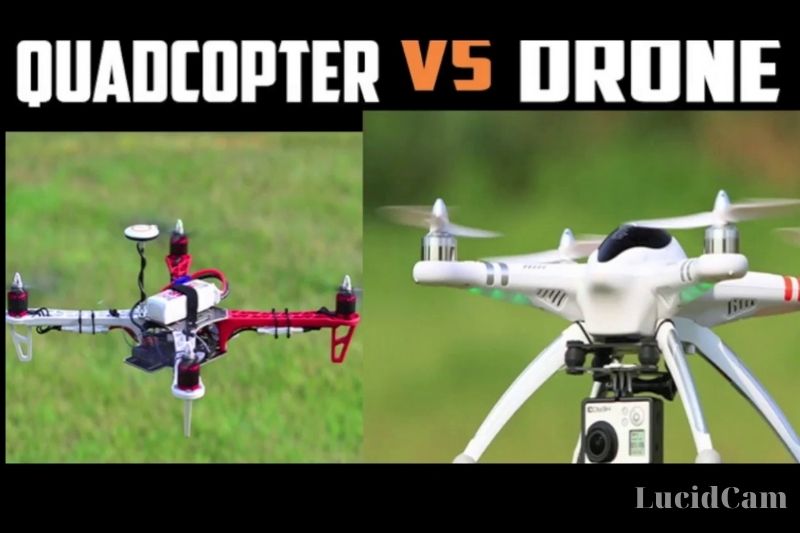 Quadcopter” refers to a quadcopter, which is a specific term that describes a drone controlled by four rotors. You can also call it a quadrotor, or quadrotor helicopter. Each quadcopter’s rotors are composed of a motor and a propeller.

Quadcopters resemble helicopters. However, they balance themselves using the movement of their blades and not a tail rotor. Quadcopters that are used as a hobby or recreational quadcopters almost always come down at the smaller end of the scale.

These UAVs can be controlled remotely, rather than being programmed by an onboard computer. Quadcopters look like helicopters but are balanced by the movement and not the use of a tail-rotor.

These definitions make it easy to see drones as a broad category, and quadcopters as one type of drone in that group. There are many types of UAVs that can also be described as drones such as Tricopters and hexacopters. Quadcopters can only be classified as quadcopters if they have four rotors.

Racing, photography, and agricultural drones are a few examples of quadcopters.

These aerial vehicles have four motors and propellers to keep them in the air, one of their distinguishing features.

What is a Drone?

Any type of UAV can be described by the term “drone”. The term “drone” can also be used to refer to UAVs that can be controlled remotely and those that are controlled via onboard computers. It can be any flying object that is not piloted by any human pilot, or any other generic term.

Although It is a small airplane and looks similar to a helicopter, this aerial craft can be made in many sizes and shapes. These include top-secret military vehicles as well as tiny toys that fit into your palm. They are engine-controlled, able to fly long distances without stopping, and can be distinguished from other aircraft.

Drones can be used for a variety of purposes, including commercial and military. Drones can be used to carry out surveillance and attacks. Drone flying has increased in the agricultural industry, where it is used to monitor crop growth and livestock. Drones are tightly regulated due to the potential dangers and applications they can pose to traditional, manned aircraft.

Although the original drones were aerial in nature, they are not required to be in the dji air 2s in order to be classified as drones. There are numerous instances of both on-land and underwater drones that you can take with you when scuba diving. 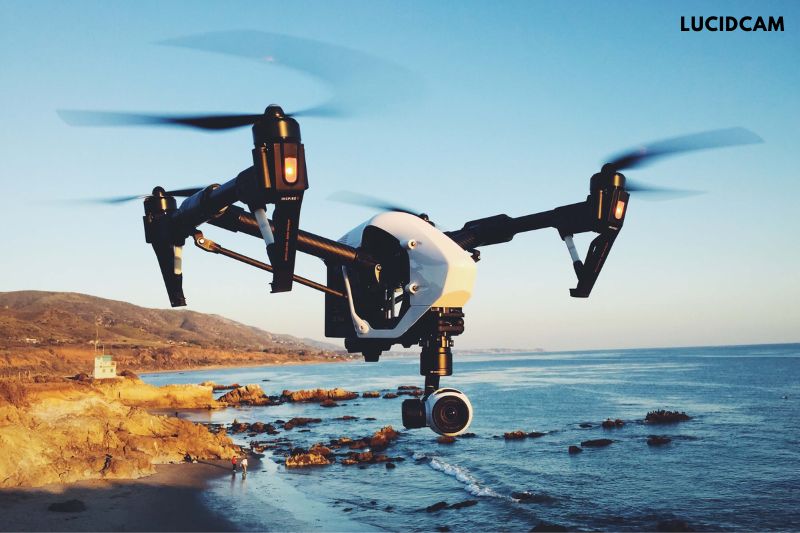 Use Of Drones And Quadcopters 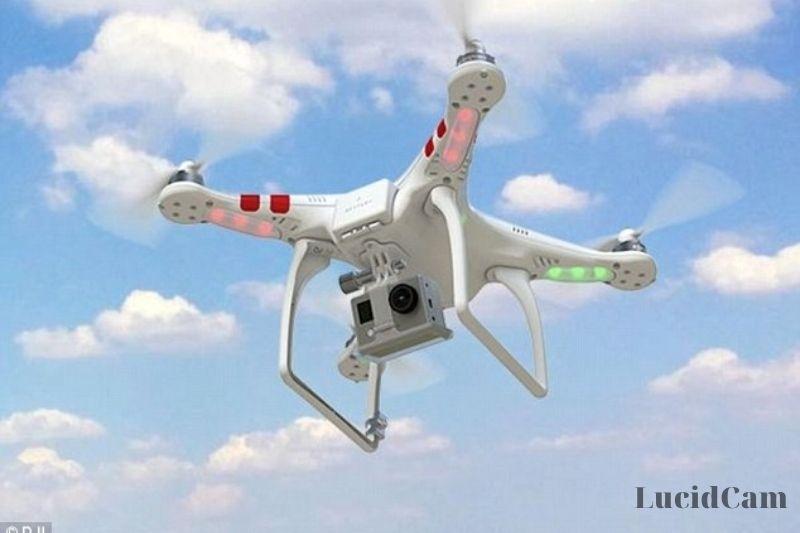 Aside from their structural differences, quadcopters and drones have different uses. Drones can be used for a variety of purposes. The most popular use is that of a military aircraft. Drones can be used to deliver attacks, conduct search and rescue operations, conduct reconnaissance missions, surveillance, and intelligence missions. Basically, a drone is a flying robot.

Drones are not only useful for military uses but can also be used in civilian and commercial applications. They can be used to track livestock and track wildfire progress. They can be used for aerial surveying and can also be used to capture aerial shots and film photographs (for applications like movies and recording sporting events). They are sometimes used for law enforcement, and conduct research in areas that manned aircraft cannot reach (e.g. tracking dangerous weather patterns such as hurricanes). Because of their powerful capabilities and wide range of applications, drones require extensive regulation to ensure their safety and predictability.

The regulations for recreational quadcopters tend to be less strict than those of other drone types. There are rules that govern where and how drones may be flown. Within a radius of the White House, quadcopters and drones of all types are not allowed. To avoid scaring neighbors, it is a good idea to let them know that you might be flying a drone from their property.

Quadcopters and drones are closely related. They are, however, very different. Quadcopters can be used as recreational drones and offer many options for enjoying a drone flying hobby.

What Is Different Between Drone vs Quadcopter 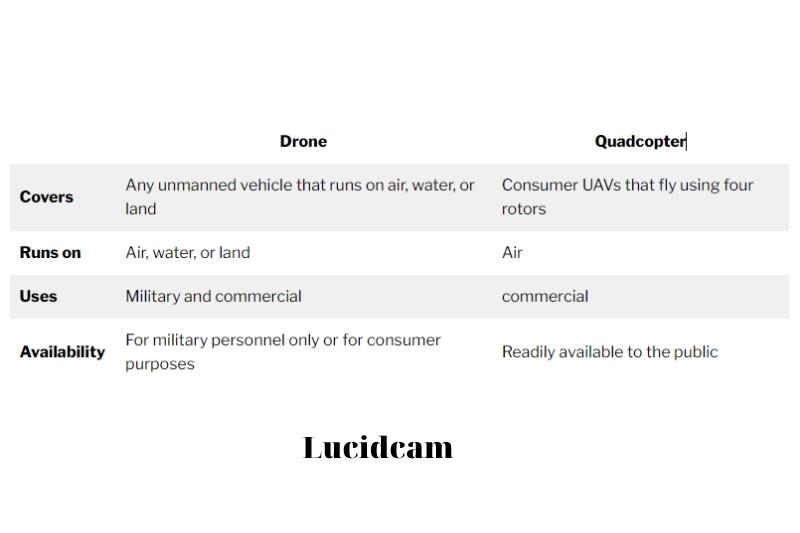 The media term drone is an empty term that can be used to describe any modern unmanned aerial vehicle (UAV). Although drones can have many technical names, they all seem to be the same thing: an aircraft that is not piloted by a human, and controlled either autonomously using onboard computers or remotely by a pilot. These aerial crafts can be referred to as helicopters or small planes. These types of drones have two main characteristics: they can fly for long periods of time, and they can be controlled by an engine.

Quadcopter refers to a rotary-wing plane that is controlled by four motors. Quadcopters do not have a tail-rotor. Quadrotors are also known as quadrotor helicopters. Each quadcopter’s rotor consists of a propeller, a motor, and an antenna.

Additionally, quadcopters can be controlled remotely rather than being controlled by an onboard computer. Although there is nothing to indicate that it must be remotely controlled, the common usage of this term has made it an implied qualifier.

Quadcopters look a lot like helicopters. However, they balance themselves using the movement of their blades and not a tail rotor. Quadcopters that are used as a hobby or recreational quadcopters almost always come down at the smaller end of the scale.

Because they are not allowed to be used for business purposes, aviation rules do not allow them. Quadcopters are now very popular for their lightweight UAV form factors. There has never been an operational manned quadcopter using this design.

A typical drone is equipped with a GPS framework, which is not the case for most quadcopters. A quadcopter can be described as a controllable, elevated vehicle. It also has segments that allow it to be autonomous, such as a GPS. This makes it completely programmable without the need for human intervention. A few manufacturers now make quadcopters that have a GPS framework.

These definitions make it clear that drones can be considered a general category, and quadcopters a specific category within this category. Unmanned aerial vehicles can also be classified as hexacopters, octocopters, and Tricopters. They all fit the definition of a drone. Quadcopter status can only be given to a drone with four rotors.

The Social Benefit of Quadcopters and Drones 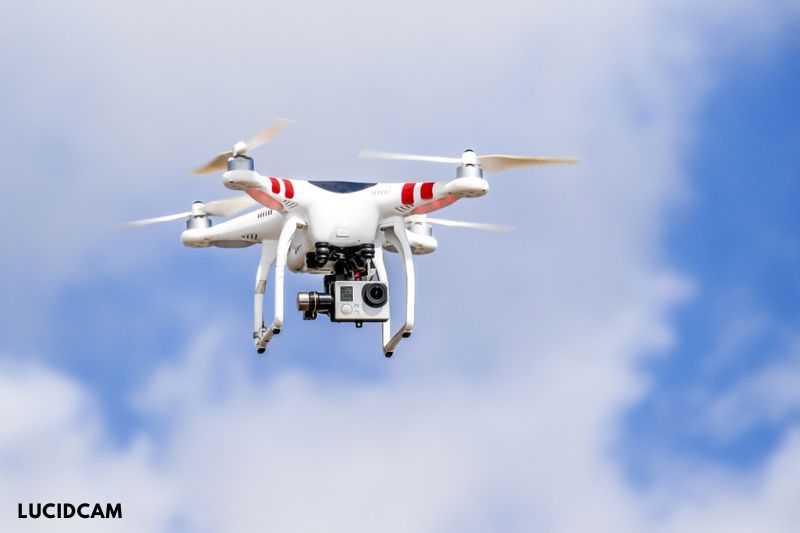 Here are several advantages of quadcopters versus drones. A vehicle created primarily for aerial or flight operations is known as a quadcopter.

Should I Choose Quadcopter Or Drone?

Due to this, it is important to grasp the differences between quadcopters and drones, even if this is the topic of most discussions. However, you also need to know which is which. Additionally, be aware of the experience you desire.

When discussing quadcopters vs. drones, acquire an automated camera drone if you’re searching for a quick and simple approach to capturing images or movies from a distinctive angle and want to have fun and learn more about flying. Instead, invest in a quadcopter. 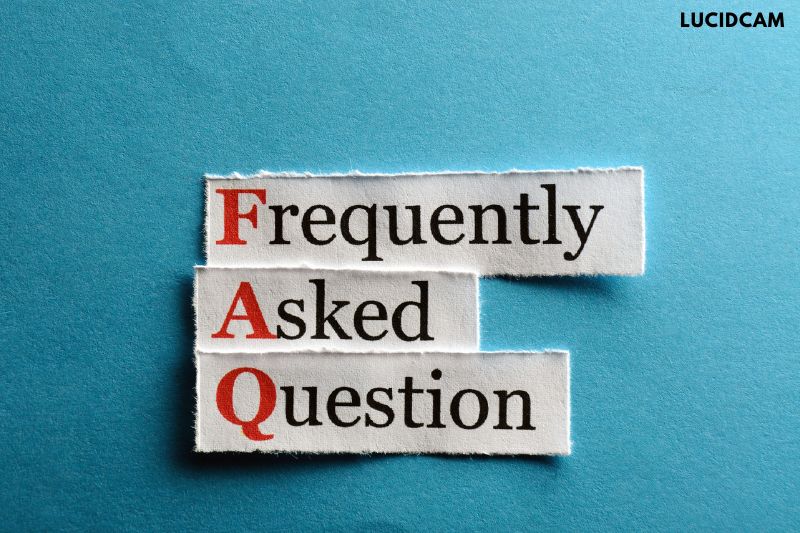 Why are quadcopters called drones?

How did Unmanned Aerial Vehicles become a common term? … To refer to the aircraft, the Commander used the term drone to refer to it in relation to the British Queen Bee. Because the drone was unable to function independently, it had to be controlled from the ground.

What are the four types of drones?

Is the military using quadcopters?

The quadcopter can carry many payloads and can be used for various military and tactical missions, including intelligence, surveillance and reconnaissance, detection and tracking ground targets, and search-and-rescue.

Which is better quadcopter or Hexacopter?

Quadcopters and drones are very similar. But they are not the same. A particular type of drone is a quadcopter. It is used for recreational purposes and offers many opportunities to indulge a passion for drone flying.