In this article, we will review the Potensic A20. This is a great device for a drone hobbyist to be introduced to. If you are new to the world of drones and looking for a simple drone with a good camera and limited features, then this is a perfect drone for kids and beginners 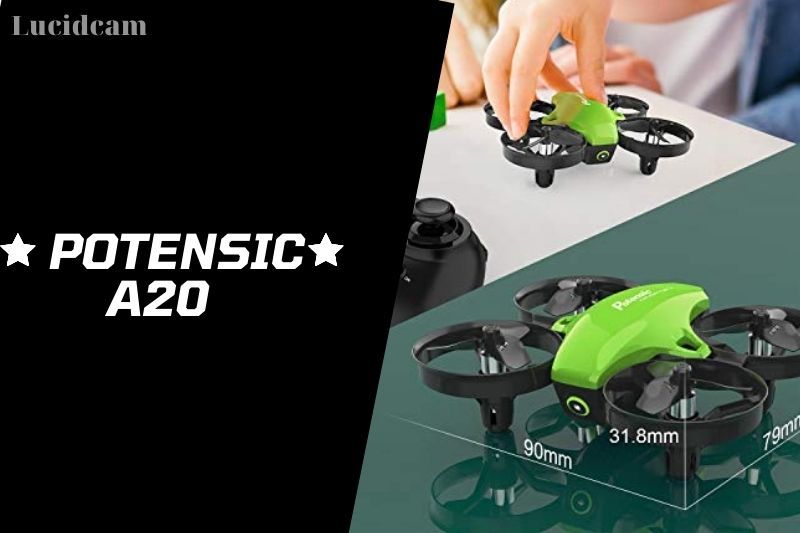 The Potensic Mini Drone A20 features three flight modes: takeoff and landing without a head, three-speed options, an emergency stop, and an altitude hold.

A low voltage alarm is also sent from the drone to warn that the battery is nearing its end and that it should be returned as soon as possible. These modes can be found on similar beginner drones in the same price range.

The A20 Micro Drone’s three-speed modes make it easy to use for a novice pilot who doesn’t have the same experience as a professional pilot. Once they are comfortable with the drone, they will be able to increase the speed to maximum enjoyment.

This drone’s headless mode is another feature that makes it easy to use. Headless mode allows for greater freedom and eliminates the need to know which end of the drone is facing.

The Potensic A20 micro drone comes with an additional battery that extends flight time by five to six minutes. This extra battery is great for children who love the drone and need to swap batteries quickly. Children can swap out batteries or charge the battery while they fly the micro drone.

The Potensic Micro Drone A20 has an emergency stop function to protect it from wind damage. You can activate the emergency stop at any moment. It will turn off the drone and allow it safely to land on the ground.

This micro drone supports a one-button landing and takeoff. It is easy to perform a one-button liftoff. Place the Potensic Micro Drone A20 on a flat surface. The controller should then be paired with it. The drone will hover at about 1.2m after the one-button key has been pressed. 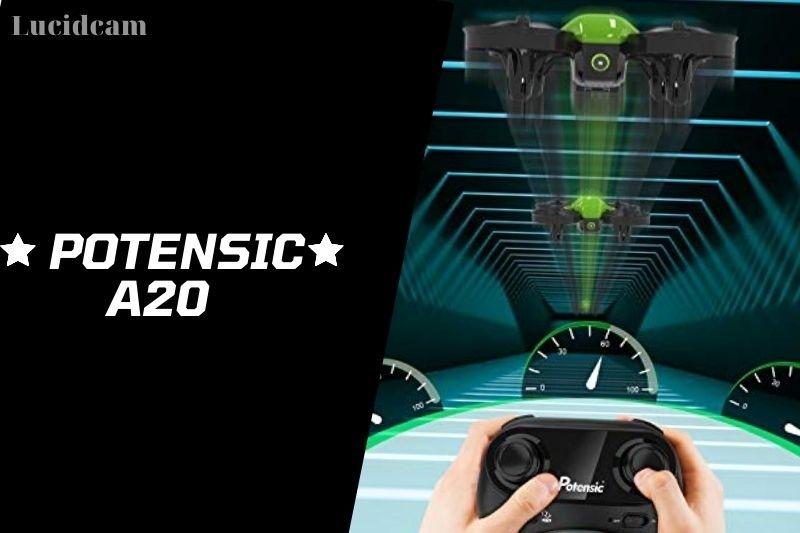 The Potensic A20 mini drone can be launched by simply pulling down on the left control stick to synchronize the drone and controller. Next, press the takeoff/land button. It will then ascend and hover approximately two meters above the ground.

The Potensic A20 mini drone responds quickly to commands from the controller and can zip around at a remarkable speed. The drone can be programmed to automatically adjust its responses to align with the pilot’s position. The drone will always move in the same direction no matter which way it is facing if you press left on the control stick.

The A20 has no self-stabilization and must be adjusted constantly during flight to keep it from drifting indoors or outdoors. Outdoor flying is not recommended as even the slightest breeze can blow the drone a significant distance.

The range of communication between drone and controller exceeds 30 meters. Because of its small size, the A20 is difficult to fly when it is further from the pilot. Although the advertised flight time is between 10 and 13 minutes, we were unable to get more than nine minutes from a fully charged battery in our testing. The A20 has three batteries. 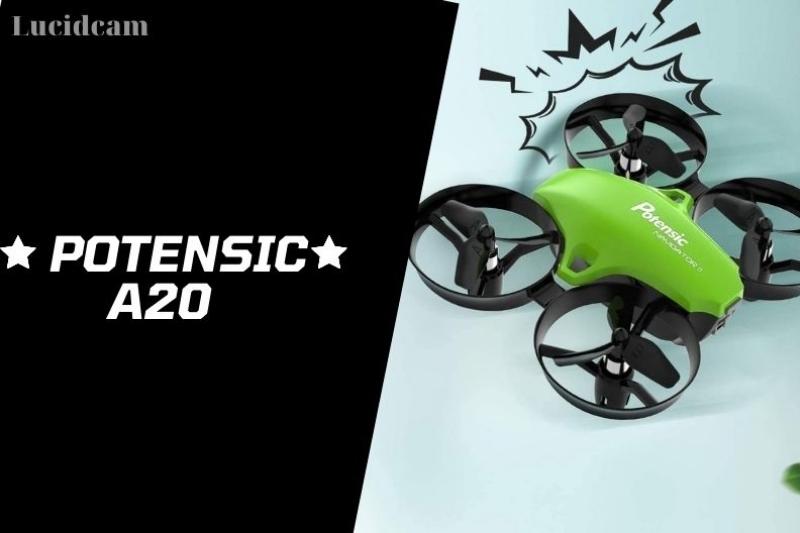 The Potensic A20 Mini Drone was designed with children in mind. It has a durable, rugged outer layer that protects against impact and collisions with objects. The propeller guards are a great safety net to protect the propellers from damage like cracks or nicks.

The drone comes with two lithium batteries, each of which can provide five to six minutes of flight time. This battery slot was designed to be safe for children. To fully charge the batteries, it takes between 35-40 minutes and 40 minutes.

The small drone has one advantage that is shared with micro drones: no Federal Aviation Administration registration (FAA). The FAA requires that drones over a certain size and weight are registered. The registration of this micro drone is not required. 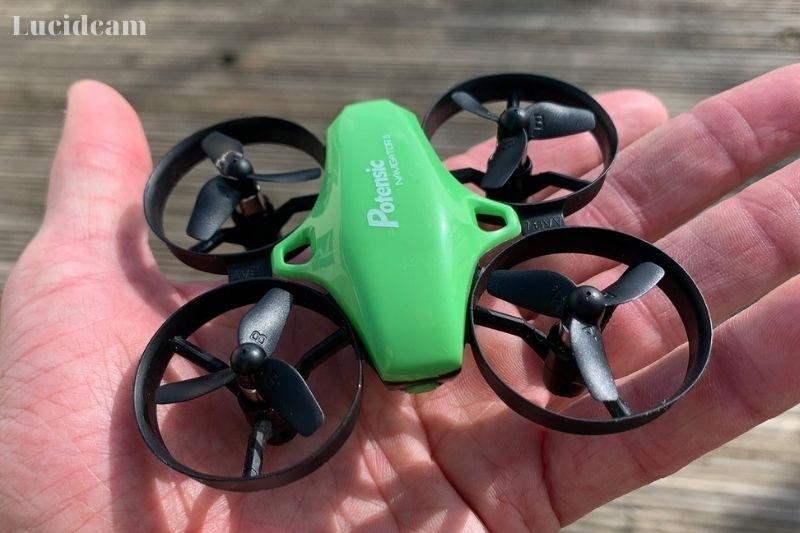 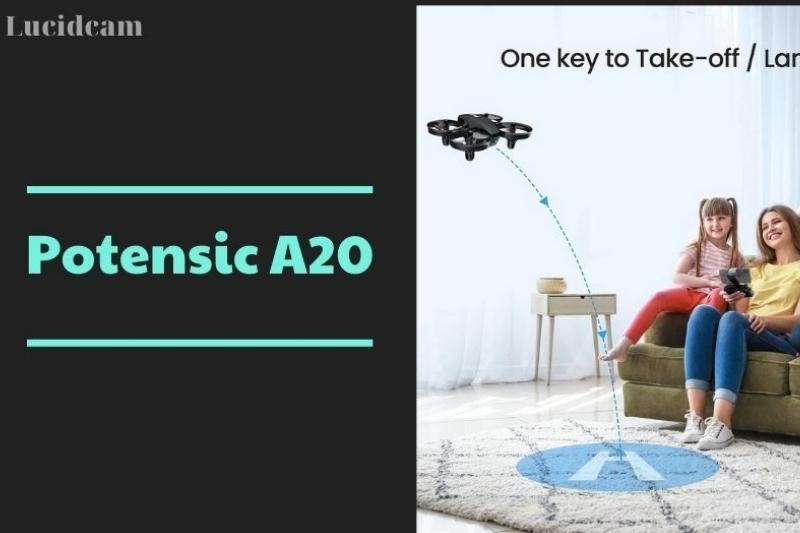 The Potensic A20 Mini Drone is perfect for children who have just started their hobby. It has a One Key Takeoff and landing function that automatically initiates or lands it with one button push. This function is designed to eliminate manual maneuvering errors that could lead to crashes or collisions, especially if a child fidgets on the controls.

Your child can focus on learning the basics of flying the drone and avoid any tricky landing or takeoff maneuvers. 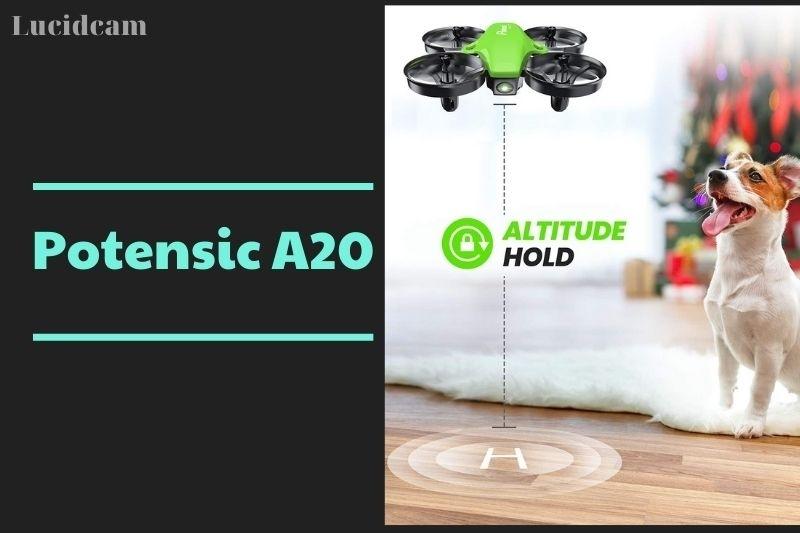 The Altitude Hold feature makes flying the Potensic Mini Drone A20 Mini Drone much more stable. The craft locks down at a fixed altitude and flies with this value continuously.

This helps to avoid confusion when moving the drone simultaneously while you adjust its altitude.

It also reduces the risk of your children becoming fatigued by not having to look up as the drone is being operated. They can keep it in their sight at all times.

Barometer set height makes this nano drone fly stable in the air, more clear turning direction when being operated even by beginners or kids. 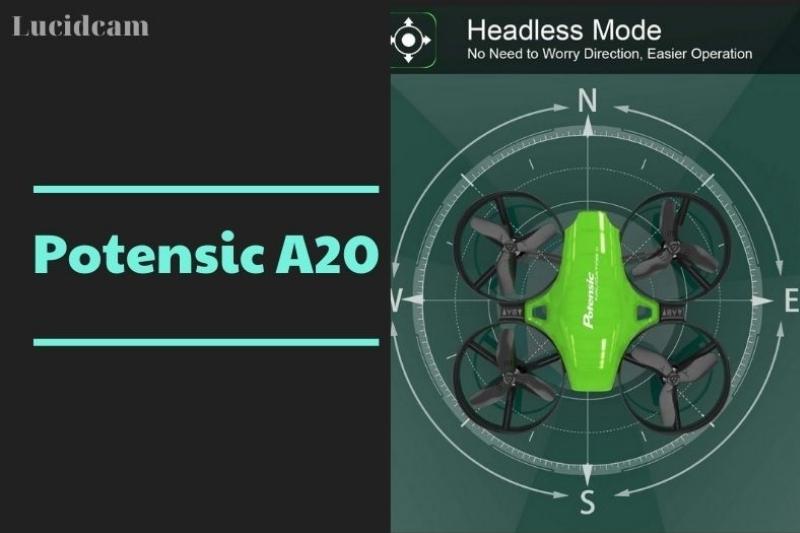 To fly a drone smoothly, you must consider the three axes of motion it follows. Adults find this daunting, but it’s even more so for kids who are about to experience their first UAV flight in just minutes. The Potensic A20 Mini Drone includes the user-friendly Mode of Headless.

Players don’t need to care about the original drone head direction anymore cause under the headless mode; operators can fly the drone according to their own direction.

This is the Panic Button for the Potensic Mini Drone A20. The Emergency Stop feature stops all flying operations when your junior pilot loses hope. This is to minimize any injury or damage that may occur.

Although we stated earlier that the Potensic A20 Mini Drone was not worth saving, it is still possible to keep it. 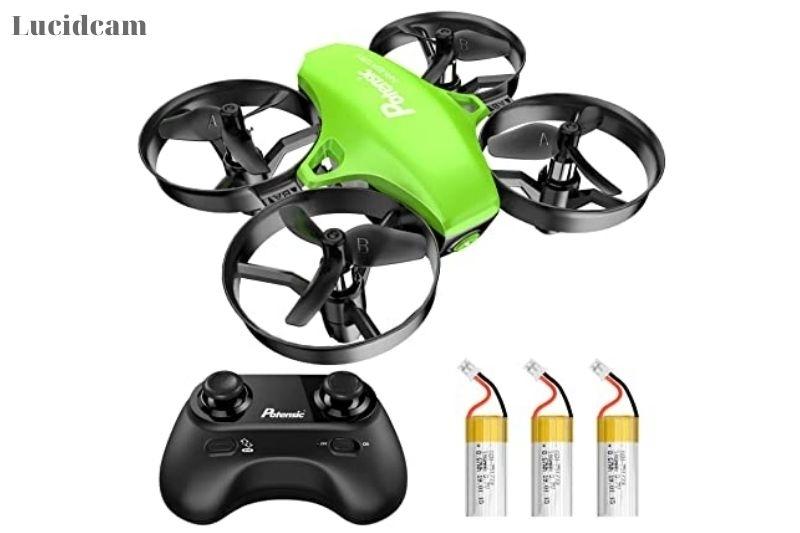 A modular battery pack provides up to 6 minutes of flight time for the Potensic A20 Mini Drone. Although the drone is not particularly impressive, Potensic compensates by adding an extra battery pack that will double the fun.

We can’t do much except to recommend that you purchase several battery modules for longer flight operations if your goal is more time in the air. Even if your drone budget was doubled, it would still give you similar flight times. A drone that can fly for 10 minutes or more would cost you $100+.

The batteries can be charged for approximately 40 minutes, which isn’t a lot, but we aren’t too excited considering how much power they pack.

The transmitter will make a “beep” sound, and the drone rear indicator LED for the drone will show “flash one and power off” to remind you that your batteries are low.

Nope, no camera here. Given its price, this is not surprising. Potensic had no choice but to give up optics in order to bring this product to market at such a low price. This means that there are no photos, videos, or FPV modes, but there is still plenty of fun to be had. 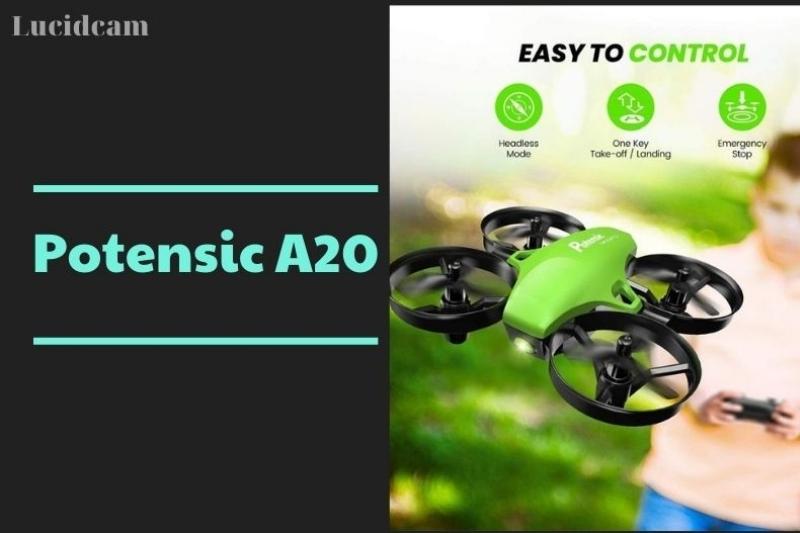 Its controller is adorable, just like the Potensic Mini Drone A20.

Mini-sized controllers take design cues from gaming console controllers. They feature a dual joystick layout and a sparsely-populated control face. It consists of the main function buttons and a power key. However, the transmitter runs on 3 AAA batteries. Make sure to stock up on rechargeables for future use.

The Potensic Mini Drone A20 Mini Drone’s remote control is what we love. It sounds like an alarm when the drone is running low on power or is approaching its range limit. This feature is not as effective as an LED screen, but it gives your pilot some information to help prioritize drone retrieval.

What Is The Difference? 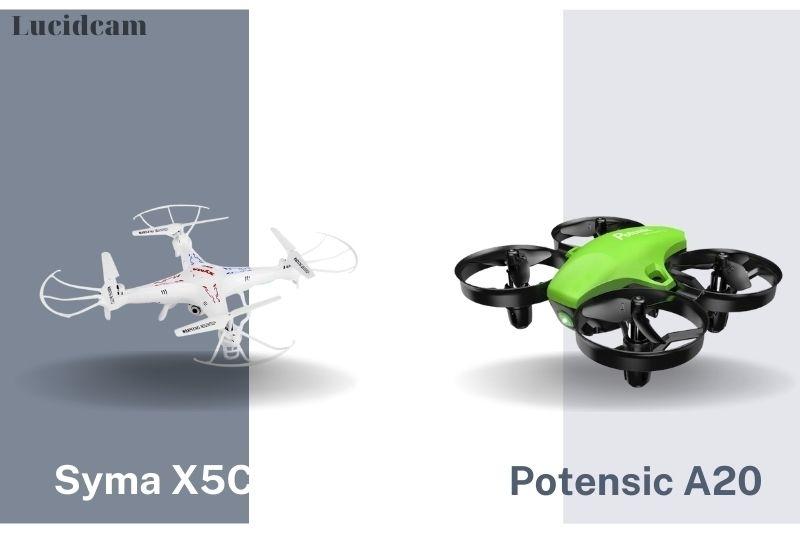 If hours of entertainment are the goal, the A20 Micro Drone from Potensic is the drone you should buy. This micro drone is not as clever as its competitors. However, it can be trained to perform manual maneuvers.

Syma X5C, a similar drone to the Syma X5C, has a built-in 2MP HD camera and is meant for beginners or children. The Potensic Micro Drone A20 has more features than its Syma X5C counterpart.

The Syma X5C has only a low and high-speed variable option. However, the A20 offers more flight modes like the ability to hold altitude. The Syma X5C is also defeated by the micro-drone, which has five minutes more flight time and takes 25 minutes to charge.

Here are the full reviews of Potensic A20 if you are interested in knowing more about other Potensic drones. Check out:

The Potensic A20 camera is great with excellent features and decent image quality. The resolution is good at 2K. It can record 4K videos, which is a bonus! It also has a very long battery life and can last for quite a while before needing to be recharged. There are also some cons. The mobile app cannot be used to change most settings and there is no GPS or Wi-Fi connectivity.