The Insta360 Nano is the latest 360-degree camera to hit the market, and it’s already garnering a lot of attention. This pint-sized camera can capture 360-degree photos and videos with ease, and it even comes with a built-in tripod for easy mounting. So, is the Insta360 Nano worth your hard-earned cash? Keep reading for our full review. 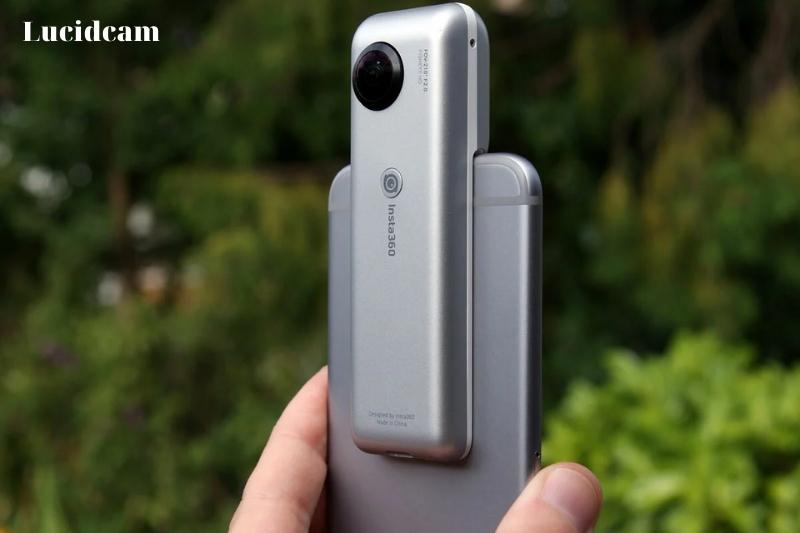 The Insta360 Nano is a great way to start capturing VR-friendly 360 degree video with your iPhone. This simple iPhone attachment houses two cameras and connects to the iPhone via the lightning connector.

The camera works with iPhones from the iPhone 6 to the iPhone 7 Plus, but it can also be used independently, provided that you don’t require a live-view display.

The Insta360 Nano is a simple and elegant option for those who want simplicity. The Insta360 Nano’s budget-friendly price comes with a low-quality video. However, 3K video at 30fps paper sounds quite impressive. 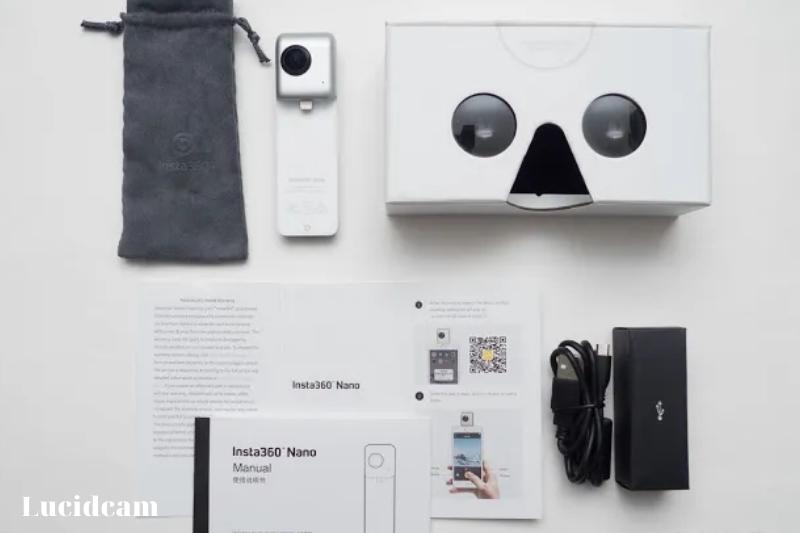 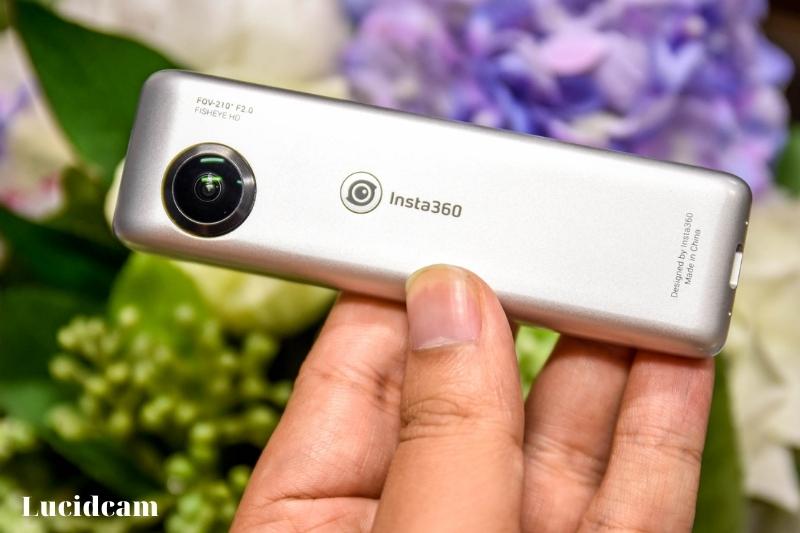 Insta360 Nano’s slim profile design fits snugly into your iPhone’s back when it is plugged in. The Insta360 Nano plugs into your phone’s bottom. This allows you to flip the app vertically so your iPhone is upside down. The pair of f/2.0 lenses facing the opposite direction is now at the top. You will need to remove any case that you have on your iPhone to attach the Insta360 Nano.

The Insta360 Nano weighs in at just 70g. A soft slip pouch is also included for easy transport. It doesn’t feel very solidly built, and you’ll need to be careful.

These lenses aren’t as bulbous as other 180-degree lenses like the LG 360 CAM. The field of view for each lens is 210 degrees. This allows them to seamlessly combine the images for 360-degree spherical video.

The lenses are exposed, so be careful not to damage them. For this reason, the LG 360 CAM came with a slip-over hardcover. It made the camera look like an asthma pump, but it doesn’t offer any equivalent protection. The protection provided by the pouch is not adequate.

Only one control is located on the camera: the power button at the back. This doubles as the shutter for the Insta360 Nano when it’s being used independently from your iPhone.

Because the camera has its own internal battery, it doesn’t draw battery power from an iPhone. The Insta360 can be charged via micro-USB. This means you will need to bring an additional cable.

The Insta360 Nano can be used without your iPhone. It stores images and videos to a microSD card that you insert into the bottom.

It is important to preserve the packaging of Insta360 Nano, not only to maintain its resale price. You can actually use the packaging to play your videos with a VR headset inspired by Google Cardboard. It’s a nice touch that allows you to use VR even if your headset is not the best.

Simply plug your iPhone into the app, and you can view your 360-degree video via the app. Or use it with other content such as Google Cardboard. 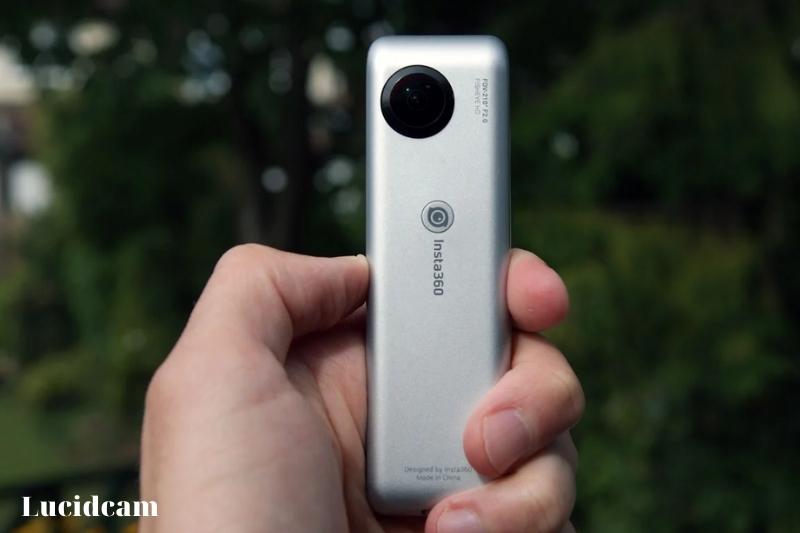 While other 360deg cameras can be difficult to use, Insta360’s designers made the Nano an easy camera to start with.

It is as easy as connecting it to your smartphone to get it running. The controls are also very simple.

The companion app features a single shutter button on the screen. This can be used to either take a still or to record a video. After holding the button in place for a few seconds, the video will continue recording until you tap it again.

You can adjust the exposure and white balance. But that’s really all there is to it. Your video clips and photos can be saved to a microSD card. Both can also sync to your iPhone’s internal storage.

The Nano’s built-in 800mAh battery provides power, so your iPhone won’t be drained of its battery life. This is enough to record 70 minutes continuously, and it can be topped up with a micro USB if you run out. 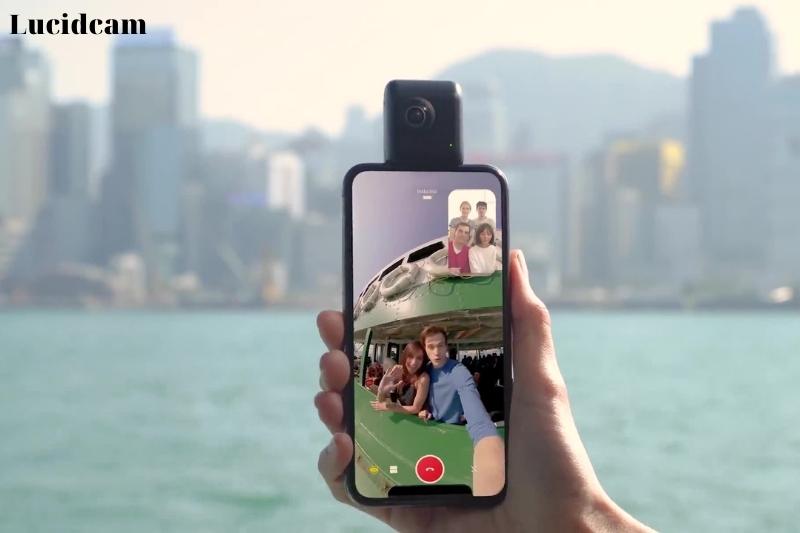 After attaching the Insta360 Nano to an iPhone for the first time, the App Store will prompt you to download the companion app.

The app is simple and straightforward. The app allows you to view the sensors in real-time and can be tapped to pan around. This lets you see what’s being recorded from both cameras. With a toggle located above the shutter button, you can switch between video and still images.

You can’t change many settings while you take photos or record videos. There are a timer mode and exposure compensation. You can also apply a few filters. A “beauty mode” is another filter that you can use.

It is impossible to use only one camera for 360-degree photography, which may be counterproductive. Sometimes you don’t need a 360-degree result. This was an option on the LG 360CAM that I found useful.

You can also use the Insta360 Nano camera without the need for the app. Once the camera is powered on, a single push of the rear button will capture a still image. A double-press will start the video. You can also configure a triple press to trigger a timed capture.

It was again here that I wished you could use just one of these cameras. It would be much like HTC’s defunct HTC Re camera, which was great for quick snapshots.

Another trick that the Insta360 Nano has is live streaming over your iPhone’s internet. It can be set up to work via YouTube or Facebook Live. The latter was what I tried after watching the tutorial video provided by the company. Although there were some hurdles to overcome, I was able to make it work in the end.

You can view images and videos recorded with the Insta360 app. When you are not using the app with a VR headset, you can switch between different viewing modes like Panorama, Fisheye, and Globe. You can also swipe around or use your iPhone’s gyroscopes to view the world.

Insta360 Nano can record video at 30fps and 3K resolution (3.040 x 1.520). However, the actual quality of the resulting video is not very impressive. The video doesn’t have a lot of detail and appears noisy even under ample lighting.

Contrast objects against the sky can cause chromatic aberration. Highlights are more susceptible to over-exposed highlights, while shadows can look as only dark patches without any detail. These are not the only complaints I have about 360-degree cameras, including the LG 360CAM. However, I felt underwhelmed.

The iPhone screen tends to be more appealing than videos uploaded to YouTube or viewed on larger displays. The screen will be closer to your eyes, so the headset magnifies the flaws.

Sometimes image stitching can be slightly off with ghosting in areas where two images overlap. The settings have a calibration option, but it didn’t seem like this would fix the problem. Many 360 cameras have trouble stitching when objects are very close to them.

Audio accompaniment can be a bit bland and uninspiring. Immersive VR footage is as important as the visuals, but the sound has no directionality. Because microphones can’t pick up ambient noises in open spaces, the environment and atmosphere of your environment won’t be captured well.

Additionally, my iPhone and camera became warm to the touch after recording video for a few minutes.

The battery life was reasonable for a 360-degree camera, as it required recharging after one hour of use.

Video is not as good as still images. Sharper images retain more detail, such as grass, and are easier to manage overall. You should consider that there is a slight delay in capturing an image. Images saved in the Globe view look great.

Insta360 allows you to upload 360-degree photos to their servers. However, in order to obtain the share URL, you will need to first share it in another app, such as WhatsApp or Twitter. The URL will only be available once that has been done. It is not obvious that the URL has been uploaded elsewhere before this point, making it a bit confusing at first. 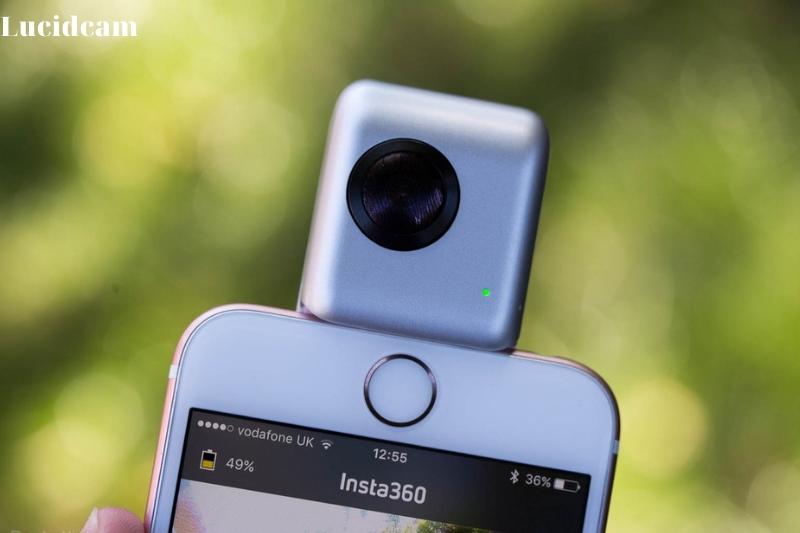 Insta360 boasts the camera’s 3040×1520 resolution. But, keep in mind that you are only viewing a small portion of your 360deg photos at any given time. The lenses aren’t very sharp or detailed and suffer from light flares and distortion.

Yes, there are problems, but so does every 360deg-paired camera.

You can see your clips and photos back in virtual reality. They work as expected. The images are clear and sharp enough. The stitching between the clips and the pictures is seamless. They didn’t surprise me.

Nano’s box doubles up as a handy VR viewer, which is a nice touch. The app allows you to share photos directly with your friends. It can upload to Facebook Messenger, Twitter, and WhatsApp.

Battery Life Is Quite Good

My Insta360 Nano can last for a day in a normal shooting day with stop and go. The battery will start to run out if I am filming lots with the Insta360Nano in the afternoon. This happens if you view your photos often.

Edit from Your Smartphone

You can use filters directly from your phone with the Insta360 Nano app. There are very few filters available. I don’t think I would use them. I, therefore, import my images to Snapseed or Meitu to add some filter sparkle to the image or adjust exposure and detail. It’s at least an option.

This is not an issue with the Insta360 Nano, but all 360-degree cameras generally film whatever is holding it. In this instance, your hand or tripod. It records everything as a 360-degree camera. You can upload your logo to Insta360 as a cover, which is a nice feature.

You can also purchase an Insta360 base for your Nano (sold separately $40) to mount on tripods or selfie sticks.

Everything can be uploaded directly to your smartphone.

Nano’s unique feature is the ability to do everything from your smartphone and then upload it. You don’t need a laptop to do this. Unfortunately, the app doesn’t allow for video stitching or editing. However, you can probably find an alternative app online

Here is full of Insta360 Nano reviews, you can check other Insta360 reviews:

If you are looking for a 360-degree camera that is affordable and easy to use, the Insta360 Nano may be the perfect option for you. This camera is small and lightweight, making it easy to take with you on the go, and it is simple to operate, even if you have no experience with 360-degree cameras. The image quality is impressive, and the Nano is capable of capturing both photos and videos in 360 degrees.