The Holy Stone HS160 quadcopter is a compact device with some relatively good video quality. This portable drone comes with a downlink for video footage. The arms are foldable and due to the slim build it’s very is easy to carry it anywhere, especially if you carry it in the provided dustproof bag. In this blog, we will discuss some of the highlights of this product. 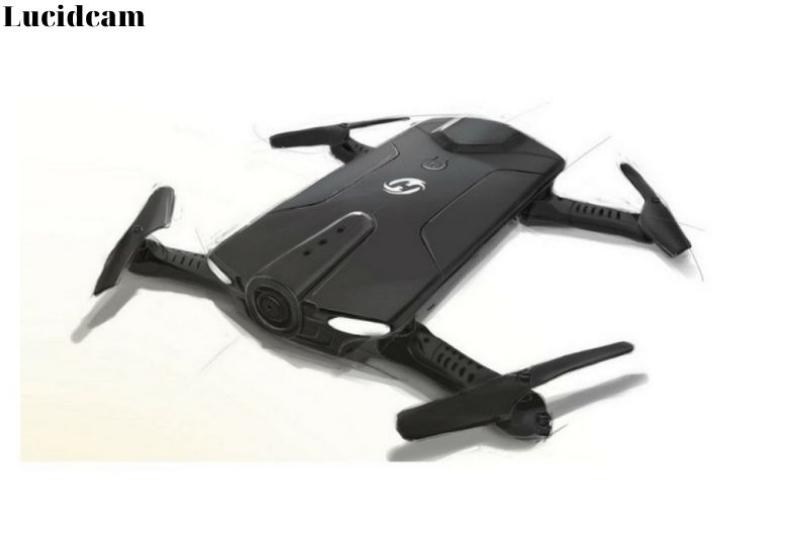 The Holy Stone HS160 Shadow FPV RC Drone folds down to look more like a desktop program than a stealthy flying device. Unfold the thing, and it looks futuristic and modern. The entire body is made from strong, durable ABS plastic. It has a front-facing camera as well as front and rear LED lights that allow you to check the position of the aircraft when it’s flying.

The basic specifications include 6-axis gyros for stability, WiFi first-person view via the included smartphone application, a 3D VR mode, and a front-facing 720P HD camera. You also have a number of automated flight features, including an altitude hold function and gravity sensor mode that tracks the movements of your smartphone. There are also four-speed modes.

The drone can fly between 50 and 70m, has a Wifi range of up to 30m, and takes seven to nine minutes to complete a flight. The included app allows you to use a VR headset.

The box contains a fully-built drone, a transmitter, and two batteries. There are also spare propellers and spare parts. These include control sticks, a battery holder, spare propellers, and USB chargers. It is also easy to set up and configure the drone before you can start using it. 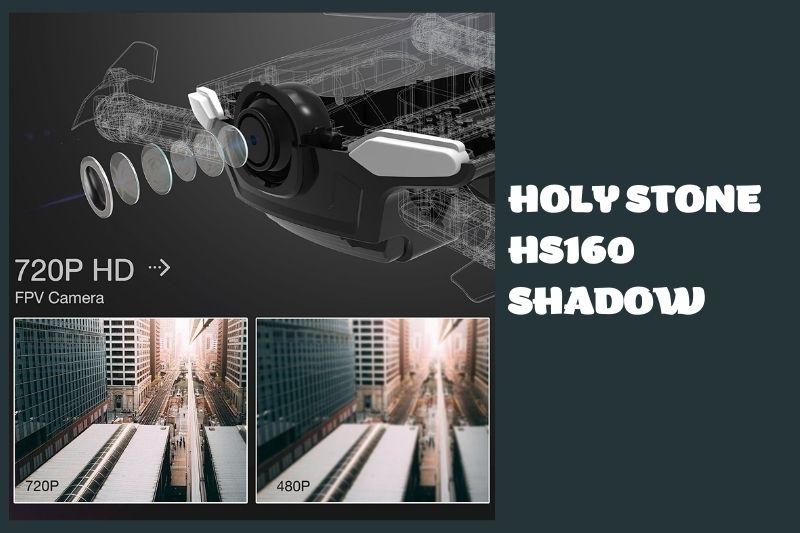 Holy Stone Hs160 Drone includes a 720p camera capable of taking decent photos and videos. The footage is clear and easy to view, even for young adults or beginners. Attach your smartphone to the drone and you can view videos using FPV navigation. It comes with a sturdy smart holder to protect your phone from accidental damage. To control the drone, you will need a small and functional remote transmitter. Your phone must be within 30 m of the remote transmitter in order to connect with it.

The HS160 has a nose-mounted 720p camera that provides a high-quality HD picture but is not as good as a Full HD 1080p camera. However, this shouldn’t be a problem for most users as the video feed and photos are still of good HD quality.

The control range of the remote transmitter is between 50-70 meters. This means you can still land the drone, even if the video wasn’t captured. You can experience what drones see with a 3D VR headset. Holy Stone drone has included virtual reality in its drones and this is a great way to get extra points. This drone is highly recommended for novice pilots. Despite the sensor challenges, the Hd camera makes it worthwhile.

The HS160’s impressive camera captures sharp video footage. High altitude hold makes the drone ideal for aerial photography. The videos can be viewed on three-inch computers screens with minimal pixelation. The streaming is impressive, even though sometimes the footage may be cut out for a second or so. Even though the drone has a slow down sometimes, it still transmits wirelessly.

Framing photos can be difficult, especially for those who are new to the drone. It can sometimes be too far from real-time and require a lot more guesswork. Downlink lag can sometimes cause poor video quality, especially when flying in windy conditions.

You can also use the drone with a few First Person View (FPV), goggles to experience virtual reality. FPV goggles can be used with the HS160 Drone to simulate flying from the drone’s cockpit. Although the quality is good, it is still acceptable for an entry-level drone. Performance issues are caused by the downlink lag. Overall, the drone is a good value for money, and the video quality is acceptable. 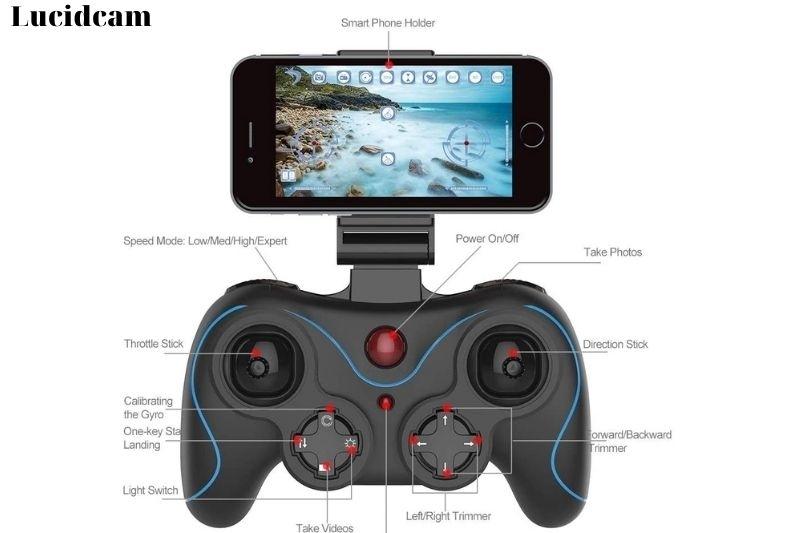 The controller is excellent. It is very similar to an Xbox controller, as I have already stated. The only difference is that joysticks are located at the top and directional pads at the bottom. There is one trigger button per side at the front. The controller has a smartphone clip built-in to the top, which can be used for holding your smartphone in FPV mode. It feels very lightweight and comfortable to hold, even though it is quite light.

Buttons are not soft, but they are very clicky and well-arranged. There are 2 status LEDs located in the middle of your controller. The status LEDs are lit after the controller was turned on and the other after the connection was established. Overall, although the controller looks a little different to the ones you usually see on drones it still works well and I have no complaints.

Holy Stone HS160’s battery is the most exciting part of Holy Stone. During unboxing, I was shocked to see two batteries come out of the box. The best part is that the two batteries that did not roll out can be easily replaced using the “unlock security lock”.

The system for changing out laptop batteries was similar, at least with older laptops. The HS160 batteries are 500mAh and 3.7V each. The actual flight time was between 7-9 minutes and 20 minutes depending on the battery.

These are the features that most people want today. We want X to do Y. Before smart and portable drones such as DJI Mavic Pro, were not available. Drones can only perform stunt tricks and move around. The drones are becoming more intelligent, which means that toy-grade drones below $100 have more features.

These drones, such as the HS160 Shadow, are easier to fly for beginners. You also get additional features like the ability to take photos and record videos at a lower price. The HS160 Shadow has two basic functions, headless mode or altitude hold. The second function is fairly self-explanatory. The headless mode changes the orientation of your remote controller. This allows you to control the drone using levers movement, regardless of its direction.

Speed mode is the next feature to consider. The Holy Stone HS160 Shadow drone has a four-speed mode. This allows first-time pilots to practice and improve their flying skills. The default speed of the drone will be the slowest when you first fly it. This allows beginners to learn basic flight controls. You will learn tricks, movements and other skills as you practice. To challenge yourself, you can change the speed mode. You will soon be flying like a pro in no time. 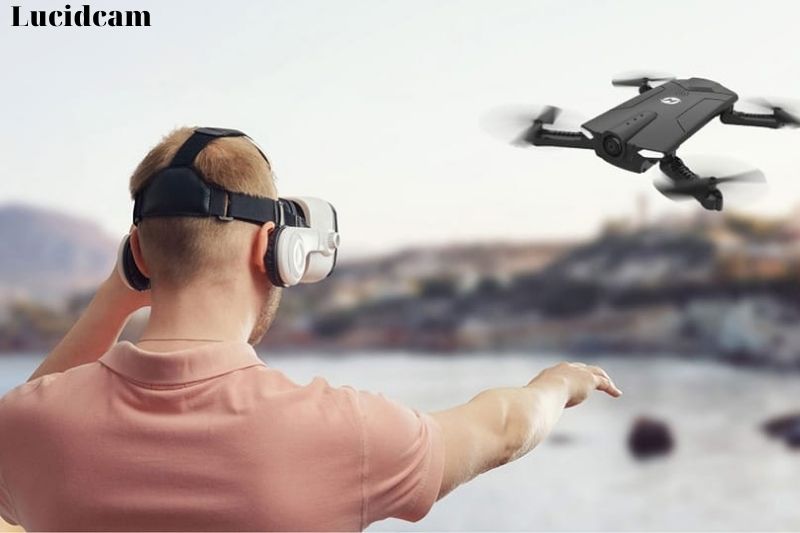 It is stable even in moderately windy conditions thanks to the joystick. However, it should be flown indoors or under calm conditions. The package includes an additional battery that allows for 16 minutes of flight, instead of eight. Because the drone does not have sensors, strong winds can cause instability during flight.

You should not fly against the wind. The drone can fly for as long as nine minutes on a calm day. Because the drone has a headless mode, beginners will have an easier flight experience.

The weather conditions and speed you use will affect your flying performance. Flying light saves you battery life and allows you to fly longer. Each battery will need to be charged for about 100 minutes after it runs out. Gravity sensor mode makes it easy to navigate with your smartphone’s movement.

Let’s take a look at the extra bells and whistles found in drones. The altitude hold works well. If you release the controls, the drone will not dropdown. Unlike the Eachine E56 which had issues with drone force landings every sudden movement, HS160 holds altitude well.

The drone is ready to fly after a simple start and lift off. To increase or decrease the altitude, use the left stick throttle.

It is very easy to fly a drone. The drone can be started and lifted off with one key. This will turn on the motors and get it in the air. It’s located on the left Dpad. To change the yaw, and push the throttle to see how high it can go, I used the left joystick. The transmitter, or controller as it is sometimes called, has a range of approximately 230ft. The buttons are responsive and work flawlessly.

If you want to take photos or record videos, users will need to enable FPV mode. The drone doesn’t come with an SD card slot that can be used to save images and video. Although I was unable to save them using my phone, that is common practice with these inexpensive drones. The Controller has buttons that can be used to take still photos or start a video recording session. This is a nice feature. To do these things, I didn’t need to touch a virtual button on my phone’s touchscreen.

Trim can be adjusted using the right Dpad. The drone speed (4-speed setting) is controlled by the left trigger. The usual pitch and roll are covered by the joystick on the right. If you have never flown a drone before then start at the slowest setting. Everything is very fast at the fastest speed setting.

The essential information, you don’t miss:

Comparison With Other Drone Models 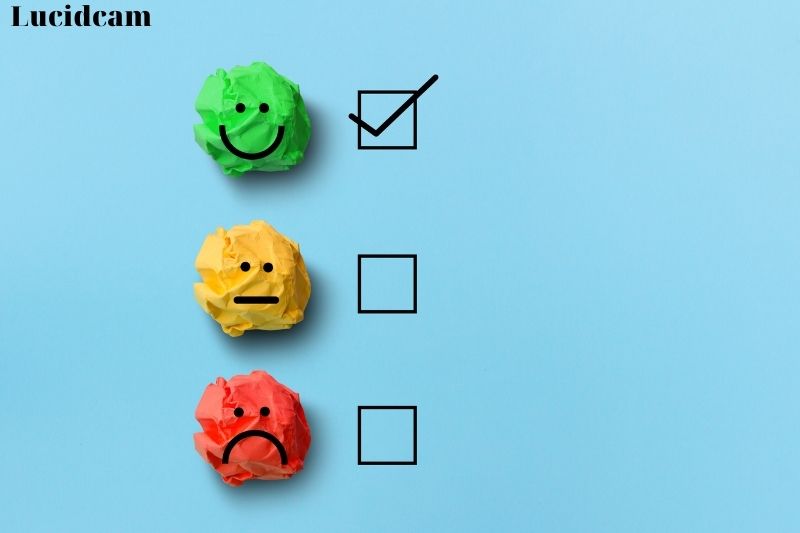 The color of the course is another notable difference. The HS160 drone is black, while the DBPOWERX400 FPV is white. It has red stripes on the propeller arms and body. While both drones offer FPV, the DBPOWERX400 has a superior downlink so you will likely enjoy a better first-person view than if your drone is the Holy Stone HS160. The Holy Stone HS160 drone is a better choice, as it has better controls and stable video footage.

The average rating for the Holy Stone HS160 Shadow FPV RC drone is 4 out 5 based on over 1700 Amazon customer reviews 73% of the reviews have 4-5 star ratings. The drone’s features and performance exceeded expectations for those who purchased it.

The drone is able to hold its altitude while in flight. The live camera function is also very popular with users, although there may be some latency. The drone’s small size and battery life are also appreciated by users. Excellent camera quality is also a plus. Overall, the users of the HS160 have no regrets about their purchase and recommend it for beginner drone fliers.

Here is the full of HS160 review. If you are interested in knowing more about other Holy Stone drones, then check out:

The Holy Stone HS160 mini drone is a good drone and powerful model. The superior features of this entry-level drone will give you great value for money. Because it offers better controls, this drone is ideal for beginners and intermediate hobbyists.

This product comes with many features for the price. You get one key return and headless mode. These two features will ensure that you don’t get lost while flying your drone. It can be used for racing. It has 6-axis gyro stabilization, making it ideal for beginners.

The drone can fly for up to 8 minutes and is capable of flying at 30 meters. Holy Stone HS160 drone flies quite well. The Holy Stone would make a good entry for the beginner into drone flight.