The GoPro Hero 3 and 4 are both great action cameras. The Hero 3 is a bit older and doesn’t have some of the features of the Hero 4, like 4K video recording, but it’s still a great camera. The Hero 4 is newer and has more features, but it’s also more expensive. In the end, it really depends on what you need and what you’re willing to pay. In this blog, we will compare Hero 3 and 4 and see which one is the best. 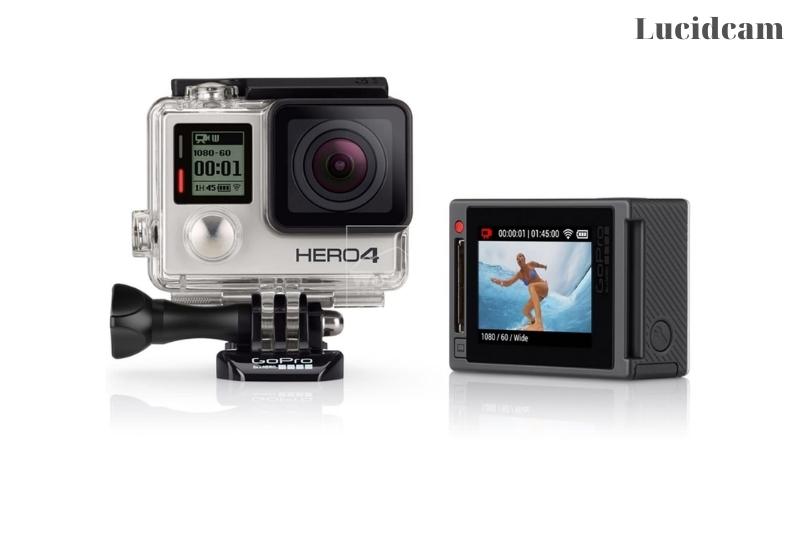 The screen allows you to see what the lens is seeing as you shoot, as well as playback and menu control. These features are common on most cameras this day, so it may surprise you to learn that GoPros have been slow to adopt them. There are good reasons, such as the difficulties of attaching a screen to such small cameras and finding a way that the battery can still be used.

An LCD screen drains your battery faster than other screens. If you want to prolong the battery’s life, you should turn off the LCD screen or only use it sparingly.

Like all the GoPros before it, the 3+ Silver doesn’t have an LCD screen. The camera is aimed in the direction that you wish it to go, and the camera will do the rest. This is possible because of the wide-angle lens. You can’t view videos or photos from the camera.

You can also add an LCD touch screen as an option. GoPro LCD Touch BacPac is the best option. It adds an additional cost, and not a small one. The screen attaches to the camera, so it won’t fit into the standard waterproof housing. The built-in screen on the HERO4 Silver will drain the battery faster.

You can get a live view from both cameras remotely using the GoPro mobile app.

The bottom line is that while the built-in screen of the HERO4 Silver edition makes it convenient to shoot, it is also less bulky than adding an accessory screen to a 3+ Silver. However, the screen’s power demands mean that it reduces battery life and causes reduced battery life. Depending on how the screen is used, it will have a different effect. 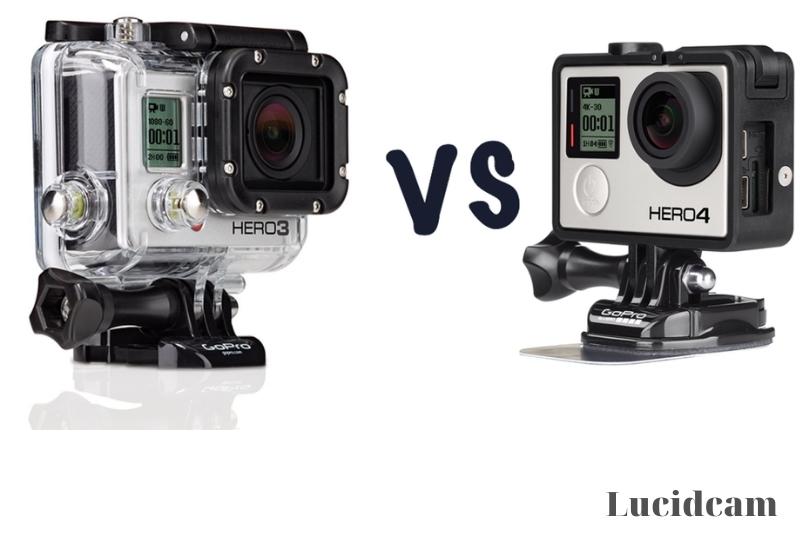 They are identical in terms of design and build. The HERO4 Silver is heavier due to the addition of an LCD screen.

Both fit in the same housings. However, if you plan to take them in water or around it, you will need to use separate clear standard housing.

Both models can take still photos, and both can also shoot timelapse stills. These still photos can be converted into video later using software on your computer. The camera is now capable of night-time photography, has a larger still size (12MP vs. 10MP), and can shoot at a faster rate (30 shots per minute vs. 10). Protune is also available (not on the HERO3+ Silver).

The HERO4 cameras use different batteries to the HERO3+ or HERO3 ranges. If you have spare batteries from older models, they won’t be much help in the HERO4.

In recent years, the size and shape of the GoPro camera have not changed significantly. The nude dimensions of all these action cams (when not in protective housings) are 41 x 59x 21/30mm. The depth measurements will vary depending on whether or not the protruding lenses are taken into consideration.

All cameras can be used with the same case. Each comes with the standard housing (pictured), which is waterproof up to 40m (131ft), and a Skeleton Backdoor that has open sides for easy access to the camera ports. The touchscreen-friendly Touch Backdoor is also included with the GoPro Hero4 Silver. 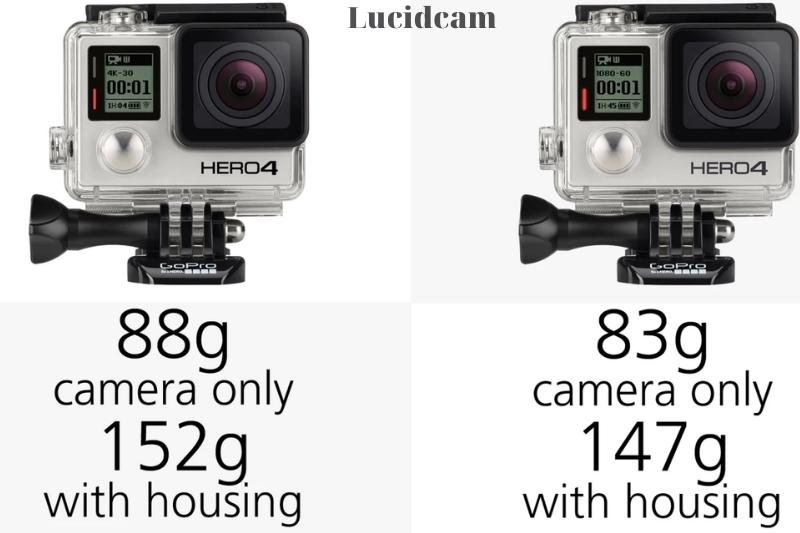 These cameras weigh the same, and you won’t notice any difference on your board. If you have one of these lighter models and you use it with a drone, you may need to reconsider whether you are going to notice a difference before you upgrade.

GoPro cameras are known for their large field of view, but each camera has the ability to shoot in narrow angles and medium angles, depending on the video resolution. 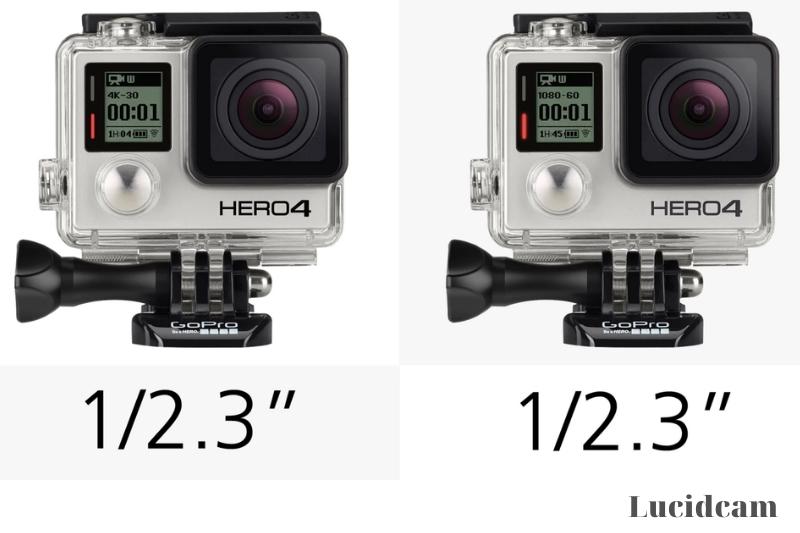 Hero4 and Hero 3+ Black have 1/2.3-inch type 4/3 sensors that measure 4,000 x 3000 pixels. Although it is smaller than the cameras you will see on other digital cameras, this is the standard for action cams.

GoPro has not yet revealed the size of the sensor in the Hero 3+ Silver. However, we know that the original Hero3 Silver used an even smaller 1/2.7 inch type sensor.

The Hero4 Black’s 4K video recording capability is its main selling point. It can shoot 4K video at twice the frame rate than its 4K-capable siblings (30/25/24 FPS to their 15/12.5 FPS). It also has twice the power of its predecessors when it comes to shooting 2.7K footage.

The GoPro HERO4 Silver is an amazing camera that captures beautiful video footage. However, the GoPro HERO3+ is even better because it has a faster frame rate and is more durable. 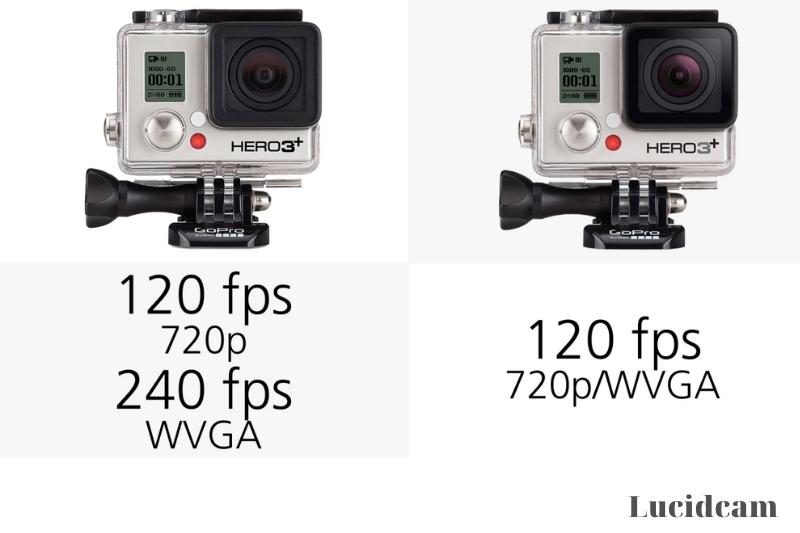 High frame rate video recording is necessary to create smooth, slow-motion footage. These GoPros can record 120 frames per second, but not at the same resolution. Only the Hero4 Black is capable of it in 1080p. The other GoPros only have 720p.

If you want to add extreme slow-motion to a 1080p video, you will need to lower the resolution on any Hero4 Black.

There are a variety of high bitrate video recording options (H.264) available for GoPro cameras, ranging from 25 Mb/s up to 60 Mb/s.A higher bitrate is more important to professionals who need the best possible video quality, again showing that this is who the Hero4 Black is targeted at.

All four GoPro cameras here feature built-in mono microphones. The Hero4 cameras have a mic that can deliver nearly twice the dynamic range as their predecessors. You can make the most out of this by taking your GoPro outside of its standard housing or using the Skeleton Backdoor.

An optional 3.5mm input allows users to attach stereo microphones externally. However, the Hero4 Black cameras are unique in that it has an integrated ADC (analog-to-digital converter), making it compatible and more versatile with a wider range of professional low-sensitivity mics. 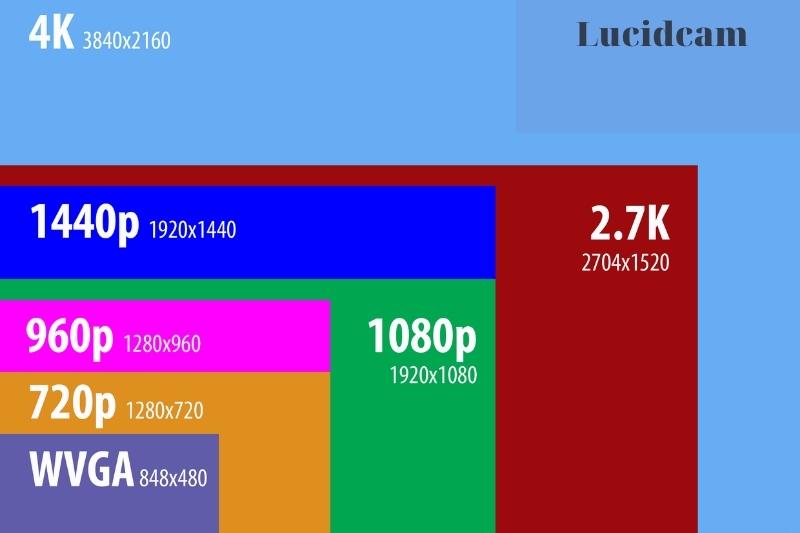 GoPro cameras don’t make the best stills camera because of their small sensor sizes. The best camera is one that you have with you, or, in this instance, one that is attached to a drone or strapped to your head.

The Hero3+ Silver’s 10-megapixel resolution is slightly lower than the other cameras that can shoot stills at 12 MP. However, it is unlikely that this will make a significant difference.

Another photo-centric feature worth mentioning is the Time Lapse mode, which allows all these cameras to automatically shoot photos at preset time intervals of 0.5 to 60 seconds. The Hero4 models now have Night Photo and Night Lapse modes that offer more flexibility for low-light shooting.

You need to be able to take quick shots of people doing amazing things if you want to capture them. You can either ask them to do it again, or you can keep asking until you get the perfect frame.

The GoPro Hero3+ Black, Hero4 Black, and Hero4 Silver can fire off 30 frames per second. This will give you better chances of capturing the moment the first time than the Hero3+ Silver’s ten frames per second.

Superview, a GoPro video mode that captures a wider angle view and more immersive footage, is clever. The camera shoots at a four to3 aspect ratio and uses the entire height of its sensor. After that, the sides are dynamically stretched to create a widescreen 16-9 aspect ratio.

Protune allows GoPro users the ability to shoot at a higher quality with less compression. You can adjust settings such as color, ISO limit, and white balance. You can choose a flat, neutral profile to make it easier to include the footage in a professional workflow. Exposure value compensation can also be adjusted to adjust brightness.

You can also adjust the brightness and noise levels by using ISO selection. The settings range from ISO 400 to 6,400 in video and 100 to 800 instills. Protune’s debut with the GoPro Hero3+ Black in 2017 was limited to video. However, on the GoPro4 cameras, it can be used for both video and stills.

The Hero4 cameras have Bluetooth connectivity, in addition to the WiFi built-in by the Hero3+ shooters. All cameras can be used with the Smart Remote and the GoPro App.

You can control your camera remotely via your smartphone or tablet using the GoPro App. Live video is also available. Smart Remote, an upgrade to the WiFi Remote that came with the GoPro Hero3+ Black, has a larger battery capacity. It allows you to control multiple GoPro cameras at distances up to 180m (600 feet).

These GoPro action cams require microSD memory cards with UHS-1 or Class 10 ratings. They can hold up to 64GB. 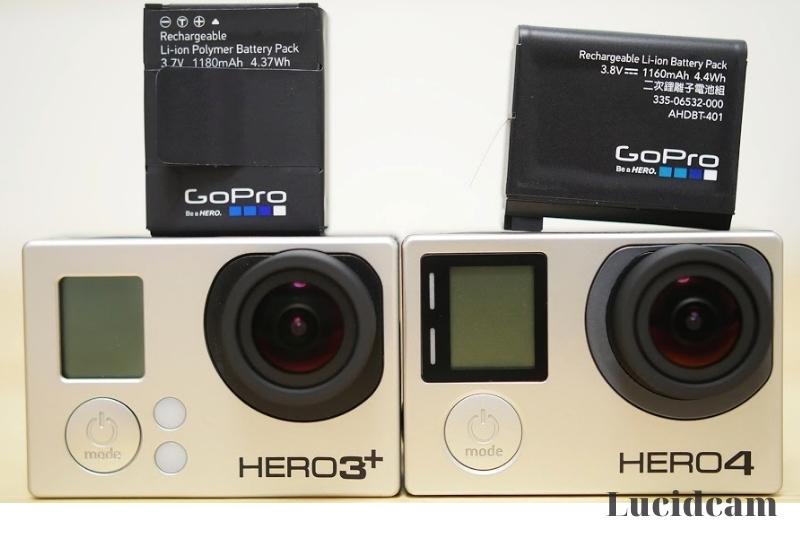 The battery life of GoPro cameras is something that many users complain about. This is especially true with the Hero4 Black’s power-hungry Hero4 cameras. You’ll need to replace the batteries in 1 hour, 5 minutes if you are shooting a 4K 30fps video with the Hero4 Black. This time, you can get it done in 50 minutes if WiFi is on and the GoPro app is used.

Also, the Hero4 cameras cannot be used with older GoPro batteries. You will need to purchase new spares. The new DSLR-like battery access makes it easier to replace them when necessary.

The GoPro HERO3+ and HERO4 are two of the most popular action cameras on the market. They both have many features in common, but there are some important differences between them. The HERO4 has a higher resolution and faster frame rate than the HERO3+, and it also has a built-in touch screen. The HERO3+ is a bit smaller and lighter than the HERO4, and it has longer battery life.