The GoPro Hero 10 and the DJI Action 2 are two of the most popular action cameras on the market. They both offer high-quality video and photos, as well as a variety of features to help you capture the perfect shot. So, which one is right for you? 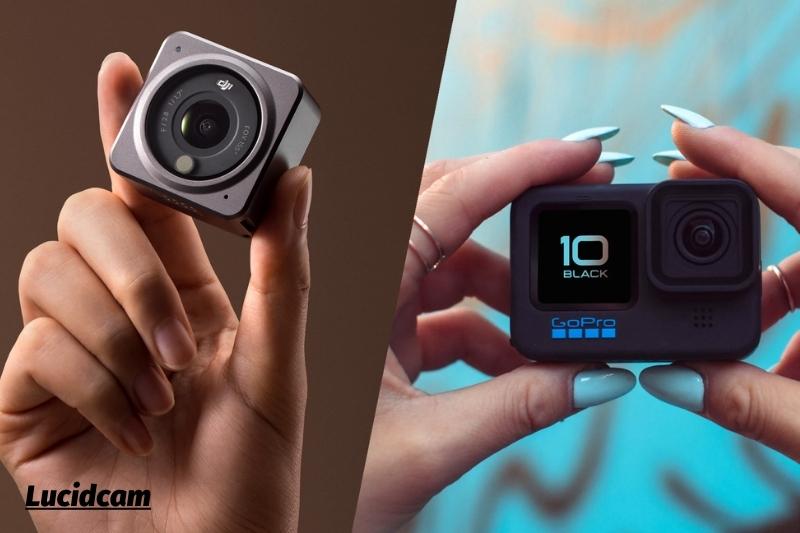 We have to give DJI credit for creating an action cam that is truly unique. The Action 2 is modular in design, and the core module of its camera is simple. It only has one button, screen, and lens. It is compact and lightweight, thanks to this feature. However, it does have its limitations.

You will get the DJI Action 2 experience, including better battery life, USB-C ports and microSD card slots. To do this, clip a secondary component to the camera. This is a second display or battery dock that latches onto the camera with magnetic mounting points.

GoPro HERO10 Black is not as compact as Action 2, but it has a better feature set. It’s one unit (larger), which includes everything you need, including a USB-C port and a front display, and a removable battery.

It’s a fairly even race so far – designers, nerds, skinny jeans fans, DJI, all of it. GoPro is the clear choice for all-in-one action camera lovers.

Both cameras can shoot video at 4K resolution at 120fps. However, the GoPro Hero 10 Black is sharper at 5.3K. This is one point for GoPro. The camera’s photo modes are more expansive, and the footage is also of better quality. We’ll get to that later. The Action 2’s 155-degree field-of-view is better than the HERO 10 Blacks 132 degrees by far – a point DJI.

Horizon leveling is another great feature that both cameras support. This prevents tilts in footage so that your videos look perfectly level, even if you occasionally do slalom to the right or left. It’s supported by DJI and GoPro (it’s called Horizon Steady for the DJI Action 2), and DJI’s Horizon Leveling is more extensive. This allows you to tilt more without causing your framing to slalom – another benefit of DJI. 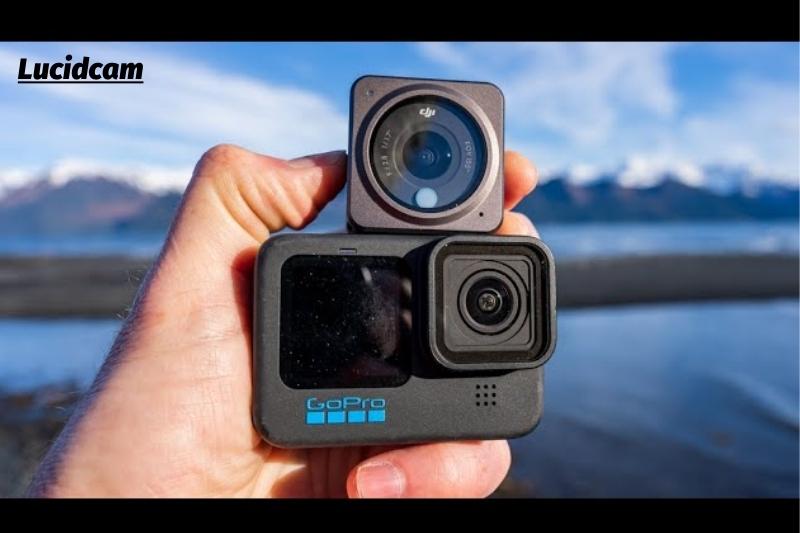 Once you are familiar with the interfaces, either action cam can be used. However, the GoPro’s HERO10 Black has a larger screen that makes it easier to use than the DJI Action 2.

Both cameras can be launched directly into video recording mode by turning them off. The GoPro HERO 10 Black’s record button can be tapped to activate the feature, but the DJI Action 2 needs Snapshot. The camera starts recording automatically when you turn it on. It’s quicker to record – it takes less than two seconds, beating the GoPro by approximately two seconds. We were left with many unwanted clips, so we turned them off.

Heat is another issue. The cameras overheat, but the DJI Action 2’s aluminum frame feels warmer to the touch. This makes it uncomfortable for 4K shots that last more than a few seconds. The camera also shuts down faster, so GoPro’s HERO9 Black was also able to record at higher resolutions for slightly longer periods.

Although neither camera can be used to shoot an epic movie from beginning to end anytime soon, the GoPro HERO10 Black is a great choice for long clips. The DJI Action 2 has 32GB of storage, which beats the GoPro’s microSD card. However, the HERO10 Black can hold a high-capacity card and is able to take clip-on modules without overheating. This makes it ideal for long clips.

You can now move on to the apps. If you don’t want to spend time scrolling through tiny screens, the app for Android or iOS will allow you remote access. GoPro HERO 10 Black also offers a wired connection, which allows for a better experience and faster file transfer.

The DJI Action 2 was not compatible with the Android 12 and Pixel 6 phones at launch. However, it has been updated and now supports both GoPro and DJI cameras. DJI offers more control over your shots in the DJI Mimo app, but GoPro has a video editor built into its GoPro Quik application.

Both phones allow live streaming via smartphones that are simple and easy to pair.

External audio and clip-on lens are both available for each action camera system in different ways. The DJI Action 2 supports a macro lens that allows for super-close-up videos and expensive DJI microphones to capture wireless audio. However, the GoPro HERO10 Black supports DJI’s Max Lens Mod and the Media Mod – GoPro’s take on modularity.

Mounting is easy with both cameras. GoPro has brought back its flip-out feet at HERO 10 Black’s base so that mounting to an action cam mount will not require any additional accessories. We prefer DJI’s magnetic latch mount. You can save time by purchasing a lot of mount plates to attach your accessories. You can use it with traditional tripod mounts and action cams.

It’s a mixed bag of pros and cons, but it’s a fascinating mix of pros and cons when comparing DJI’s new action cams. The overriding theme is that DJI does a lot more, and its kit feels more premium and refined. GoPro, on the other hand, has a more compelling ecosystem and stronger standalone cameras. But the real proof is in the video quality. 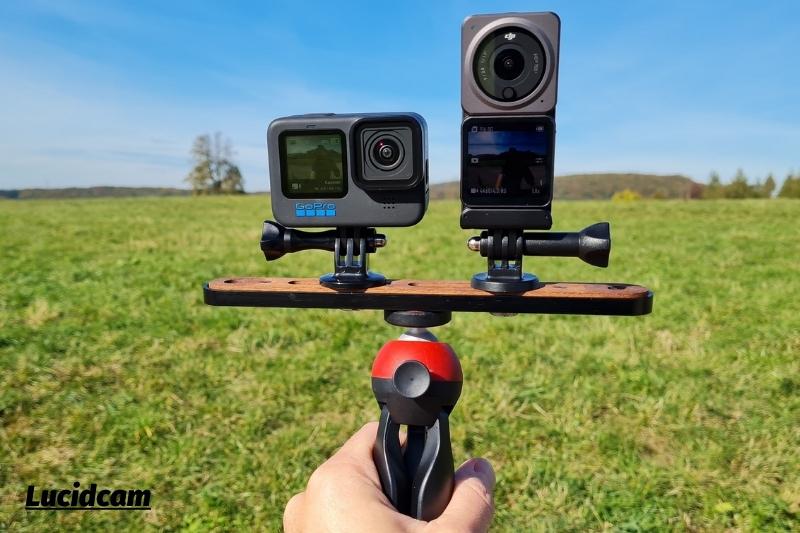 The DJI Action 2 was not without its issues with color balance when it launched, but software updates have greatly improved image quality since our first review. Although the GoPro HERO 10 Black produces superior images overall, it is a close contest with both producing vibrant, vivid photos. The image in-video from GoPro is our favorite; however, the DJI Action 2’s manual controls are more accessible. It all comes down to how automated or manual you prefer your capture experience.

Although stabilization is fairly evenly distributed across all action cameras, DJI’s Horizon Levelling edges it slightly in terms of versatility. The Action 2 is unable to compete with the GoPro once the lights go out, so you will get grainy and muddy footage at night. 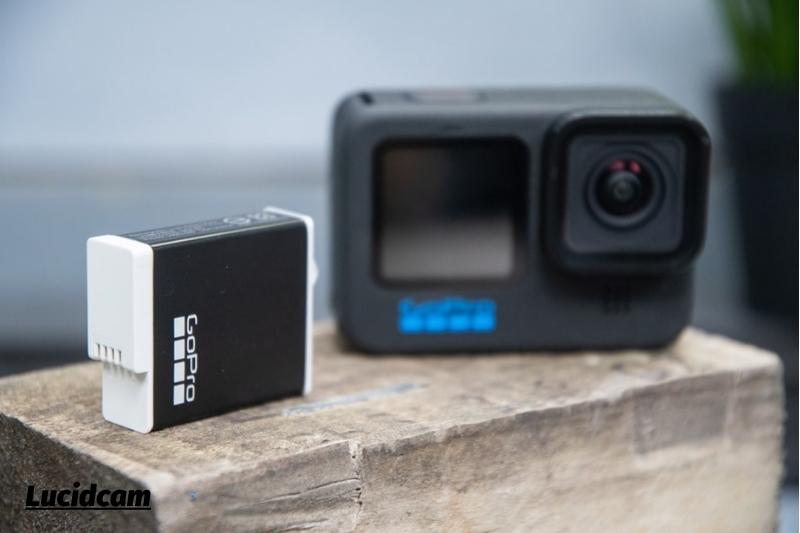 In the same situation, the GoPro Hero 10 Black can last up to 112 minutes. When shooting at 4K resolution (60fps), this drops to 76 mins. If the DJI experiences a similar drop, it will likely last 45-47 minutes using the 4K mode.

Are 45 minutes enough time for casual shoots? It will most likely be. You should also consider the Action 2’s ability to heat up, which can cause it to only record short clips. Our Action 2 stopped recording at 4K 60fps when there were no modules attached after 5m 45s (with the Battery at 79%)

Also, you lose the GoPro’s easy-to-swap battery systems. It is the cost of shrinking everything to DJI’s level.

The Action 2’s Power Mod attaches to the Battery. However, it makes it last longer. Stamina is up to 180 minutes at 1080p, which is around 60% more than the GoPro Hero 10 Black. These can be used just like a GoPro battery, but at $75 per unit, they are more expensive than the $20 GoPro.

The Action 2’s front-screen module is also slightly less expensive than the Power Mod. It takes 160 minutes (1080p) and 180 seconds, respectively. It also has its own Battery.

GoPro is Leading The Charge In Image Stabilization

The stabilization of either of these cameras is excellent, especially if you’re new to high-end action cameras. Hyper smooth 2.0 is the stabilization system used by the GoPro Hero 10 Black. DJI’s Action 2 uses Rocksteady 2.0.

Both offer horizon leveling, which is quite impressive. This ensures that your footage looks ‘upright’ even when the camera tilts a lot, as in the case with the GoPro Hero 10 Black at 45 degrees.

This works only with digitally-cropped modes. It uses the same techniques as normal electronic stabilization. The final footage is smoothed out using image data that is not in the original preview frame but is seen by the sensor.

GoPro’s version is compatible with Hero 10 Black’s top modes, including 5K and 2.5K at 240fps. This is yet another example of the GoPro GP2’s power and what it can accomplish. It’s quite impressive.

Low light has never been a strength for any action camera. They have small image sensors. The Action 2 has a slightly larger sensor at 1/1.7 inches than the GoPro standard 1/2.3″. The Action 2 performed slightly better under dim lighting. The Action 2 seems to be able to stabilize in low light better.

The internal storage of the Action 2 camera module has about 22GB or 30 minutes of 4K. You can add a microSD to the Action 2 by adding the screen mod or Battery. There is a microSD card slot built into the GoPro. It will give you the exact same results.

Lucidcam hopes this article will be helpful for you. Thank you for taking the time to read!