One of the most exciting things in technology right now is drones. They are used for many purposes, including firefighting. Firefighter drones use these unmanned aerial vehicles to deliver water and other retardant chemicals to fires quickly and efficiently.

Drones can be programmed to fly over a designated area at predetermined heights, which helps firefighters avoid dangerous spots on the ground where they might get hurt or even killed while fighting flames. With an average response time of five minutes, drones can help speed up the process of putting out wildfires before they grow out of control!

Firefighters save lives – but their work doesn’t end there. Even when people are safe from harm’s way, there’s still much more that needs to happen; like extinguishing any remaining

In this post, Lucidcam will cover all things should know about firefighting drones.

Can Unmanned Aircraft Systems (drones) Put Out a Fire?

This is a question people frequently ask. The short answer is that drones are better at acquiring situational awareness of the fire and its surrounding environment. Firefighters can use this information to put out the flames and control them. Some companies equip drones with water hoses and fire extinguishing material.

How Are Firefighting Drones Used?

Unmanned aerial vehicles (like firefighting aircraft) are being sent to fire locations as scouts, using gas sensors and cameras with thermal imaging technology to monitor hotspots to help first responders in their rescue efforts.

Drones aid firefighting operations by providing an aerial view of the fire scene, which offers firefighters real-time information about the fire’s progress.

Using drones is the most effective way to assist firefighters to fight fires. They can help them understand the spread of the fire and determine where it may go next.

Drones are useful in identifying entry points and exit points for structure fires. They also provide information about the fire’s nature that is not possible with other methods.

During the past five to 10 years, many crews have begun packing smoke-penetrating thermal-imaging cameras that are useful for spotting fires movement and hot spots otherwise hidden by heavy smoke, providing added safety.

Drone flight offers a unique perspective that is useful for monitoring crew members and finding survivors. Especially during night flights, infrared tech like DroneDeploy’s Thermal Live Map can illuminate the area and spot people and structures at-risk while simultaneously providing weather data to pilots on the ground.

This information can be used to assess progress and predict where the fire will spread.

UAVs are a safe and quick way for firefighting men to capture information about catastrophic events such as floods, earthquakes, or hurricanes.

This information is helpful for emergency managers and incident commanders to understand the impact of communities on infrastructure and living conditions. It can also help them determine if additional resources are needed from FEMA or neighboring communities.

Data collected by drones during disasters may also be used to locate people in their homes and vehicles and divert rescue efforts.

Firefighters are actively involved in search and rescue missions. A thermal camera drone can do the job of 100 people by scanning a large area and identifying people in distress.

Drones are being used to fight wildfires. This is affecting people’s lives and making it more difficult to work in the drone industry likeDronefly and dslrpros.com more worthwhile than the cost, and it makes public officials’ jobs easier and more efficient.

From wildfires fighting to burning structures of buildings, thermal drones can see through smoke and dark to detect the hotspots are and where the crew is. Firefighting crews are now afraid of being hit by a drone. This is one bug that you don’t want to get on your windshield.

A huge part of firefighting efforts includes manned aircraft for having eyes in the sky and the ability to stop the spread of a fire.

Drones offer a lot of benefits to wildland crews. 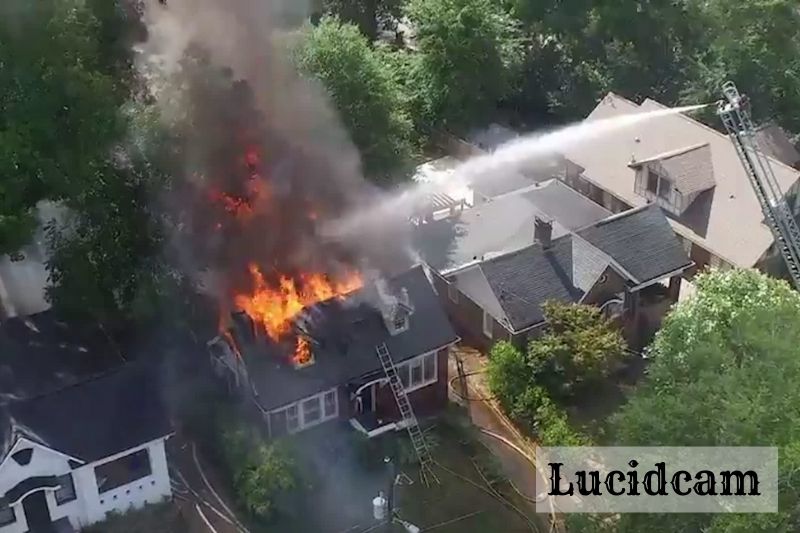 Thermocams allow firefighters to locate people trapped in wildfires or on the upper levels of buildings using thermal cameras. They can then focus their efforts on saving these people.

Even without thermal, firefighters can see through windows to gain vital information about a burning building or wildfire situation.

Drones are used by firefighters to deliver emergency supplies in disaster situations. They carry items such as AEDs (or Automated External Defibrillators) and any other equipment that might be required on the ground.

Situational awareness is crucial when saving a life or preventing fire damage. Knowing what you are walking into is half the battle.

Firefighters have used drones to take photos and create orthomosaic maps that show necessary facilities and buildings, such as schools, in the area where they work.

These maps are helpful for firefighters in locating exits and can also be used by incident commanders during firefighting to show the difference between fire and normal conditions.

A drone can be used to capture aerial footage of a fire, which can have two benefits: one, it provides situational awareness of what’s happening at the scene, and two, it allows for the collection of first-hand data about the fire’s behavior.

These photos and videos can be archived to aid in investigations into the cause of the fire.

These materials can be used to train firefighters. They provide real-life examples of how a fire could unfold and what decisions were made on the ground. 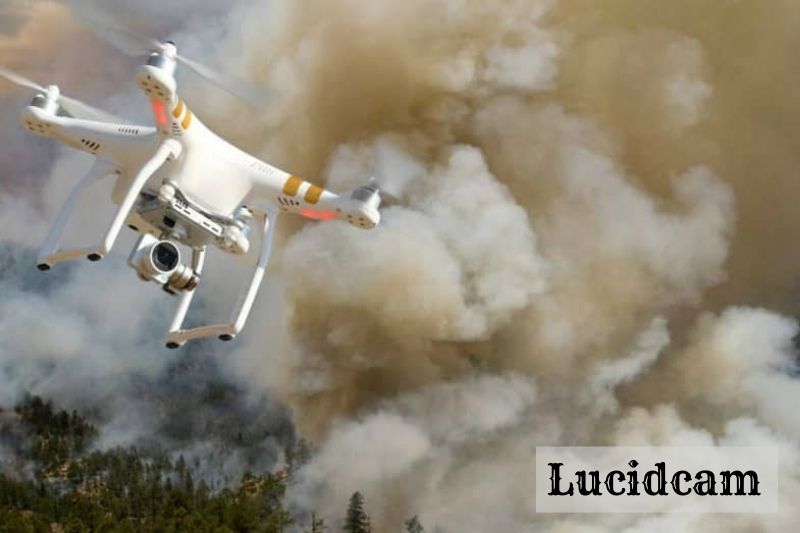 What Kind of Drones and Payloads are Commonly Used During Firefighting?

There are many types of drones, but not all drones are suitable for firefighting. These are the best ones available off-the-shelf. Drones for fighting fire DJI, custom drones based on open-source stacks such as Ardupilot and PX4 can be found. These are the drones that can be used for these types of tasks.

Without the proper payloads, drones cannot be used. These are the most common payloads used for firefighting purposes:

Payload drop systems can be easily attached to a drone to allow it to drop off various equipment.

A drone pilot appreciates aerodynamics and is willing to take a slow start out of respect for the equipment. Funding is available if a fire department sees a significant benefit from an adequate response device.

Expect to pay about $5,000 for a mid-level drone system. This system includes orientation and dealer training. At least two firefighters are needed to take on this project. Retired law enforcement, fire service, and EMS personnel run most drone companies. This gives you a considerable advantage and dollar value in clear communications and getting the job done correctly.

The rules and regulations governing drone operation are still new and, in my opinion, somewhat confusing. A district or municipal fire department must, with all good intentions, register their drones as a device to advance their mission of protecting life and property. A lot of drone manufacturers can help with the paperwork necessary to operate a drone legally and safely.

Title 49 USC 40102 describes fire departments as a government function. A Public Aircraft Operation Certificate of Authorization is required for all departments. It is a “jurisdictional” certificate that allows department personnel to fly in a matter of minutes.

Training for pilots and administrators.

Swarm firefighters in the future?

Multiple drones could be used to help with larger fires. They would share data, react collectively to stimuli and avoid dangers.

A group of European researchers published research last week in Science Robotics that showed that large numbers of autonomous drones can navigate in tight spaces. The research, highlighted here, demonstrated that aerial outdoor systems could exhibit flocking behaviors, similar to birds, that avoid collisions with other drones and objects without needing a central control.

Although the researchers did not mention this, firefighting drones are one example of such a use case for this tech.

Over time we will see greater implementation of drones into public safety agencies as the benefit they provide cannot be matched. 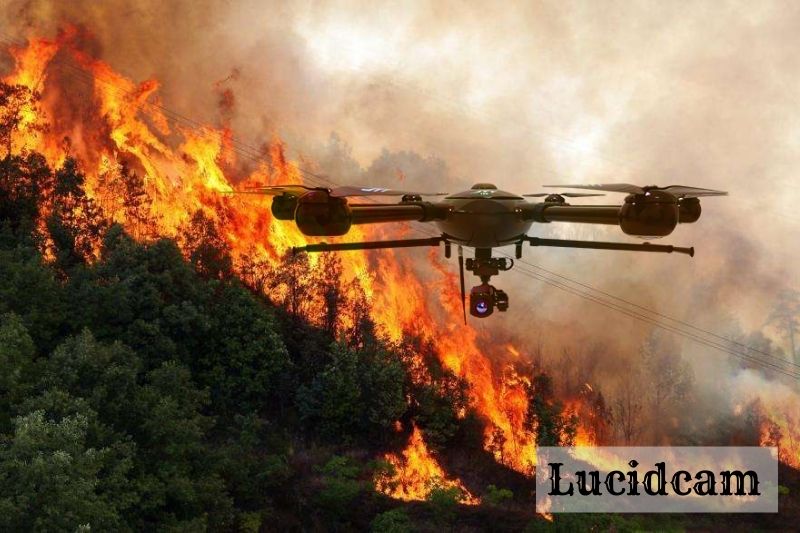 What do firefighting drones mean?

Drones can be firefighters’ eyes in the skies. The thermal camera on a drone was used by firefighters to locate hotspots and find unsafe buildings after a fire had been extinguished. As agencies all over the globe adopt drone technology, it is quickly becoming more popular.

What is the cost of a drone for firefighting?

What would the cost of a firefighting drone be? This system would cost $549 for a standard two-bedroom apartment measuring 700 square feet. A water sprinkling system will cost between $2 and $4 per square foot. This will be at least $1,400.

Will drones be able to replace firefighters in the near future?

What are the fire fighting drones used for?

Drones can provide inexpensive access to aerial data, which can be used to gain situational awareness in case of a fire. Different sensors can be carried by drones. One sensor that is often used is the IR sensor. This sensor helps firefighters identify hot spots and trap people within a structure. Drones are able to provide data that allows for better decisions.

Firefighting drones are used to extinguish fires with less human involvement. These remotely controlled robots can deliver large volumes of water, which is a crucial part of fighting forests and grassfires that have not yet reached populated areas. The use of these bots will allow firefighters to focus more on people’s safety instead of being tied up for hours trying to put out an inferno before it spreads.

This new tech isn’t just great news for emergency responders; it also means fewer injuries or deaths among those who are first on the scene. If you enjoyed this article, please share so others may find some value in it as well!