The Feiyu G5 Gimbal Review is a hands-on video and written resource that reviews the popular camera stabilizer for smartphones. This review offers a comprehensive overview of the specifications and features, so you can compare it to others on the market and make an informed decision on which one is best for you.

What is the Feiyu Tech G5 Gimbal? 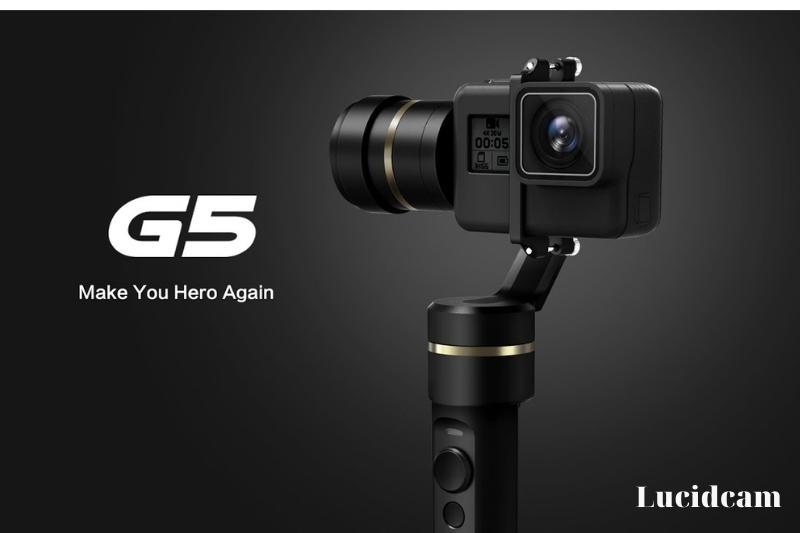 Feiyu Tech G5 is an excellent alternative to GoPro’s official Karma Grip. While the experience with a GoPro may not be as seamless, the G5 has some advantages. It can be used with many action cameras from different manufacturers and comes with a replaceable battery. 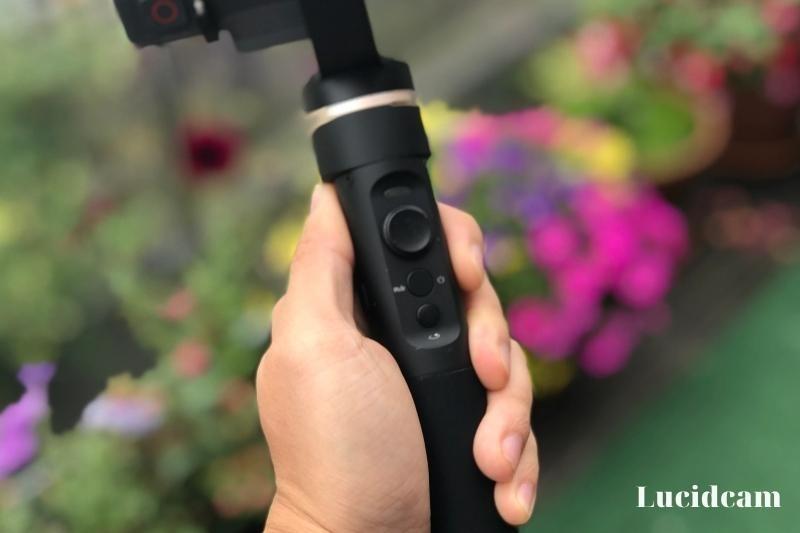 The G5 is smaller and lighter than the Removu S1 and GoPro Karma Grip. It feels sturdy due to its metal construction. It is easy to hold, thanks to its rubber grip. The controls are easily reachable.

A multifunction power button allows you to toggle between the Gimbal’s different tracking modes. There is also a dedicated button for selfies that flips the view around as long as the button is held. You can also use the four-way joystick to adjust the angle of the camera. The joystick works in the exact opposite way to the Removu S1, but you will soon get used to it.

It’s not as easy to attach your action camera as with the Removu S1 and Karma Grip, as they are compatible with many other cameras than the flagship GoPro. The other cameras require that you simply insert your GoPro Hero 5 Black camera in the mounting frame. With the G5, you will have to deal with complicated screws.

The black metal frame is attached to your camera by two screws. Two longer screws are included in the box for larger cameras. The G5 is compatible with all action cameras similar in size and shape, including the Yi 4K+ Action Camera. Attaching these models was easy for me.

The box includes a set of counterweights. These will be needed to attach to the Gimbal to support heavier action cameras. After these are installed, you can start shooting. A felt pouch is also included for transporting your Gimbal. However, it’s too small and difficult to fit into the G5 with attached action cameras.

The entire assembly is IP67-rated, so it’s safe to be used outdoors in the rain. 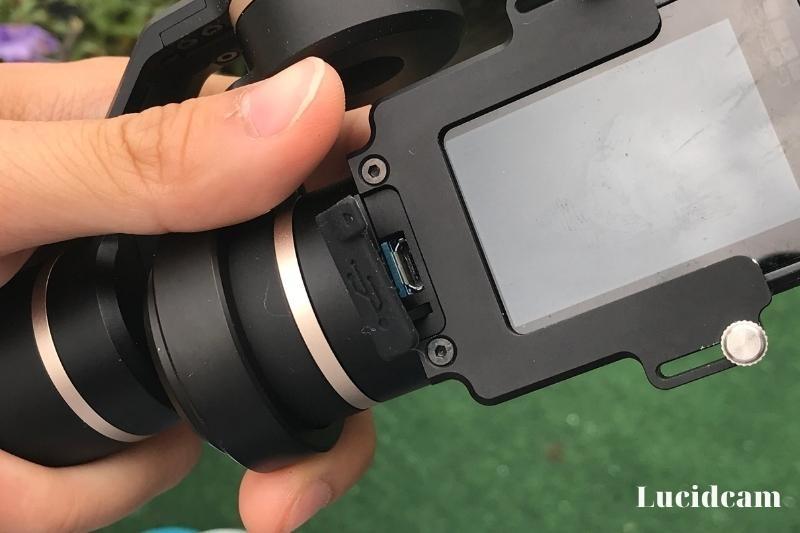 The Feiyutech G5 offers a maximum battery life of up to eight hours with each full charge.

The rubberized grip can be removed to expose the battery compartment. This will let you carry a spare unit if needed. The G5 can be charged via micro-USB. There is a port located on the side grip and covered by a rubber flap. It is possible to expect up to eight hours of battery life with a single charge. This is quite impressive.

The best part is that you can use the G5’s power bank to charge your GoPro or other action cameras. This is not the best solution. You will need to attach a short micro-USB-to-micro-USB cable or micro-USB-to-USB-C cable to your camera via the port on the head of the Gimbal. It is still a great feature to be able to top up your camera’s charge.

The G5 will not accommodate some action cameras with more unusual shapes, such as the Sony action cameras, original Garmin VIRB, and the GoPro Hero Session.

Three shooting modes are available on the Feiyu G5:

Inverted use of the G5 is also possible. Low-angle shots are made easy by the G5 because they will hold your action camera upright, even when you place it upside down.

Video stabilization was a major problem for the G5, which is far below what I have seen with highly-rated gimbals like the Removu S1 or GoPro Karma. It performed worse than the G4S, which performed very well overall.

The G5 has obvious issues with leveling, especially when the GoPro HERO5 is used with the counterweight.

The G5’s motors felt a little slow to me. This helps to cushion sudden movements, which could be a good thing or a bad thing, depending on your perspective. It’s great to be able to adjust the tilting or panning speed to capture quick movements. 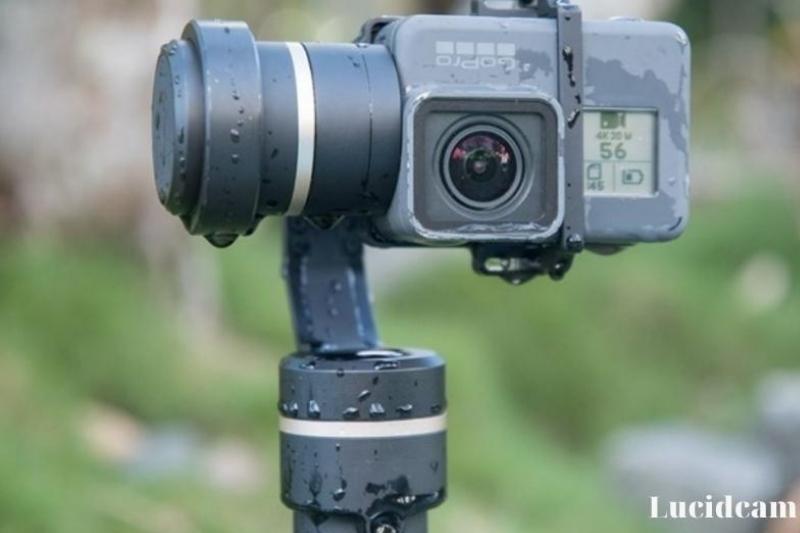 Feiyu Tech G5 includes a manual in English and Chinese. It is easy to read, and you will not need it once you are familiar with the buttons.

Feiyu Tech reduces ambiguity by using a joystick and a power button. The joystick is easy to use and has smooth movements.

Although it may seem a little confusing at first, once you get used to it, it will become very simple and easy.

The LED indicator light is located just above the joystick. The power button can be used to switch between different modes of equipment. You can switch between on/off by long-pressing the function button. You can also take selfies with the smaller button.

To activate it, press and hold it until the camera rotates 180 degrees toward you. Then release the button to return to the previous position. They are easy to find and feel solid. It is crucial to understand the features of your Gimbal before you switch modes. There are three main modes available: Lock mode, Pan and Tilting Mode, or Panning and Tilting.

This is ideal for panoramic shots because the camera follows your hand in the direction that you turn it. The frame will not shake vertically anymore.

The camera’s Panning and Tilting mode will follow you in the direction of left and right but also tilt upwards or downwards.

This mode gives you the most freedom on all axes. Lock mode is a safety mode. It prevents the camera from moving in any direction. It is easy to toggle between modes. The power button can be tapped to switch between lock and panning modes. Two taps will switch between tilting and panning mode. Three taps turn on the camera and rotate it 180 degrees. Four taps reset the position of the Gimbal.

The best thing about the Feiyu Tech G5 is the recordings. It eliminates most minor shakes and produces cinematic smooth footage.

You can film from your car using the smartphone app. The gimbal will work flawlessly with the suction cup mount attached at the front tripod screw mounting while facing forward.

The camera shakes a bit when you turn it upside down and speed up, but it is fine in the city. You will never have issues using the G5 with a GoPro camera. However, the rolling angle restriction for the G5 is 265 degrees rather than the standard 360 degrees.

Our third criteria in our Feiyu G5 review concerns the quality of the stabilization. This GoPro gimbal provides excellent stabilization thanks to its 3 high-quality, brushless motors. Although the result isn’t as great as that achieved with the best stabilizers (Removu S1, Gopro Karma Grip and Evo GP Pro), it was still very satisfactory. You’ll be able to view perfectly smooth videos on your computer after the vibrations cease.

As with most of our stabilizer reviews, we did this Feiyu G5 evaluation in the mountains, on a ski day. The stabilization quality was excellent, despite a hard session on the slopes. It is obvious that the Feiyu G5 review would have been more enjoyable if it had been done in a more tranquil environment. The outcome of your trip to Asia will be more stable if you do so.

We already mentioned in our Feiyu G5 Review that the only problem with stabilization is when the Panning and Tilting motors meet. This isn’t a common occurrence, however. Once you are aware of the bug, it is possible to modify your behavior to avoid these motors from colliding. Our final grade for this section is 8.3/10. 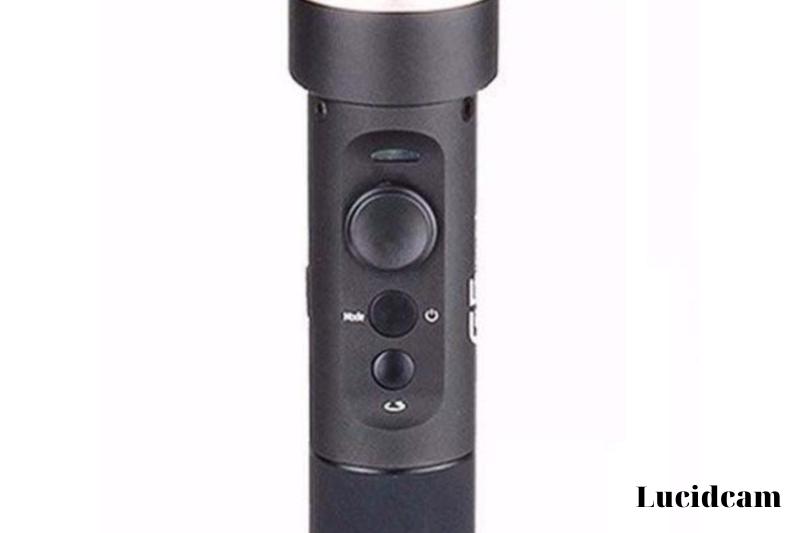 Although the Feiyutech G5’s control system is quite basic, most people who are looking for a gimbal to use with their action cameras will want something more. It is unlikely that many of you reading this will need a professional-level interface. Zhiyun Crane 3 It takes too much time to learn.

The G5 is simple. It is built around a regular handheld gimbal system, which is a joystick and some buttons. This allows you to quickly get the basics of the Gimbal without spending too much time. Feiyutech’s action camera gimbal range has done an excellent job. We believe most people will be able to take their G5 out of the box and learn the basics by just looking at it.

The G5’s joystick isn’t as responsive as modern gimbals. This is due to the technology available at the time the G5 was released. Other competing gimbals at the same time had similar issues with their joysticks, gimbal head movements, and it wasn’t until the second generation of gimbals that brands really got it right.

The Feiyutech G6 is a better option if you plan to do manual mode work on your Gimbal. It has a more advanced control system, and the joystick responds to touch much better. This allows you to control your gimbal head with great accuracy and lets you aim your stabilizer to achieve the best quality possible for your footage.

The Feiyutech smartphone application has been in a very sorry state for more than a year and has many bugs. Unfortunately, this is not a common occurrence in the gimbal industry. Many brands have ignored their smartphone apps, which could be a valuable accessory for the Gimbal and allowed them to go into almost complete disrepair.

Feiyutech G5 has a lot of connectivity and syncing issues that can be frustrating. It is frustrating to have to go through multiple failed syncs to pair your app with your Gimbal, only to have it disconnect again. Although we hope their smartphone app will soon be updated, Feiyutech has been having issues with several of its gimbals, and it is unlikely that they will soon.

The flip side is that the smartphone app isn’t essential to access your Feiyutech G5 and offers limited wireless remote functionality, as well as easy access to your gimbal settings. The gimbal configuration that comes with the Gimbal is likely to be sufficient for most entry-level action camera users.

The G5 is not cheap, and Feiyu directly compares it to GoPro’s official Gimbal, called the Karma Grip.

Although using the G5 with a GoPro will not be as easy as using it with an official accessory such as the Karma Grip or Karma Grip, the G5 still has some tricks that make it an attractive alternative.

The Feiyu G5 has an IP67 rating and is splashproof (note: it is not completely waterproof). This makes it ideal for people who need a gimbal to be used in rain or other wet activities.

The battery is also removable and lasts longer than the GoPro Karma Grip.

The G5 can also be used with other action cameras not part of the GoPro ecosystem. This is a great option for people who are thinking of or have already purchased an action camera from another brand than GoPro. The Yi 4K+ and other GoPro alternatives are improving every day, so I expect the demand for universally compatible gimbals such as the G5 will only increase.

We are now at the end of our Feiyu G5 Review. Now it’s time to find out the cost of this product. This GoPro Stabilizer is very high quality and will cost you 279$. Although this is a high-end gimbal, it’s still within the range of comparable gimbals. The GoPro Karma Grip costs 288$, while the Removu S1 costs 379 $.

This section of our Feiyu review gives it a positive rating of 8.6/10. This stabilizer is very high-quality and offers an interesting Splash Proof, which you won’t find with any other competitor except the RemovuS1 (for now). This Feiyu G5 review will give you a brief summary of the strengths as well as weaknesses.