The DJI Osmo Action is the first affordable camera that can take professional-level footage. This new product from DJI has been creating quite a buzz for its innovative design and powerful features. The Osmo Action allows you to capture amazing videos with just one hand without sacrificing quality or stability. It’s perfect for capturing moments of your favorite sports team in action! If you’re looking for an easy-to-use, yet high-quality camera, then the Osmo Action is worth checking out!

In this article, LucidCam will cover all of the features that make this DJI worth it for you to buy.

What is DJI Osmo Action?

The DJI Osmo Action 4K waterproof action camera is a fantastic option for existing DJI users that want to stay within the same ecosystem. Although it isn’t as powerful as GoPro’s Hero range, the Osmo Action can satisfy even the most fearless thrill-seekers. Vloggers will also find the front screen a game-changer.

DJI has long been the leader in drones, and GoPro is the best-known brand for an action camera. DJI Osmo Action is DJI’s latest offering. DJI has the technology to go head-to-head with Osmo Action. But can it take down a giant like GoPro’s?

The HERO 7 Black was the most popular GoPro at the time of the DJI Osmo Action’s debut. The Osmo Action is almost identical to this model on paper. We’ll use one of these models as our benchmark for this review. Two new GoPros joined the party since then – the GoPro Hero 8 Black and GoPro Hero 9 Black. Each of these models improved on the previous, pushing the DJI Osmo Action further down the rankings. It’s not a bad choice, but the market standard is high. 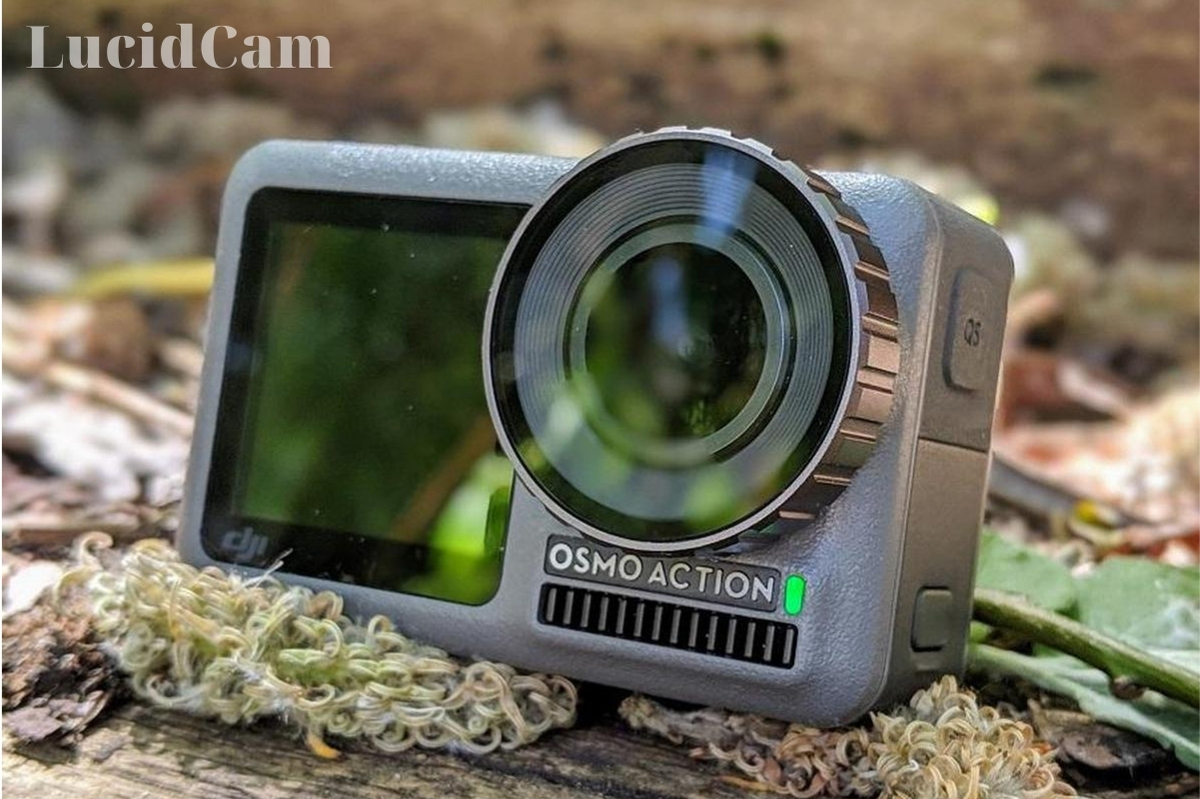 The DJI Osmo Action is able to outgun the Hero 7 Black in a few places. This is a shocking fact. The Osmo Action can be waterproof up to 11 meters without a case. This is in contrast to the GoPro’s 10 meters without a cover. Also, the rear touchscreen measures 2.25 inches. This is a quarter-inch more than the GoPro, but it does mean that the DJI has a slightly larger camera body.

The Osmo Action’s front screen is the most talked-about feature. It has a neat, color-coded display that can be seen just to the left. This screen is great for vloggers and those who plan to do activities that require the camera to be focused on them, like surfing or skateboarding.

DJI clearly intended this screen to be used frequently, so they have provided multiple options to toggle it. Tap the rear screen twice with your fingers, use the voice command “screen switch,” or give the QuickSwitch button at the side of the camera an extended press.

The Osmo Action’s design is more utilitarian than the Hero range of GoPro cameras. The Osmo Action’s casing is made of hard grey plastic, which contrasts with the sleek and satiny GoPros. Action cameras are designed to be used for their intended purpose, but they don’t have to look or feel bad while they do it.

The lens is round on the outside and has a removable metal band around it. Two internal clasps hold the battery in place, and it is located on the bottom. 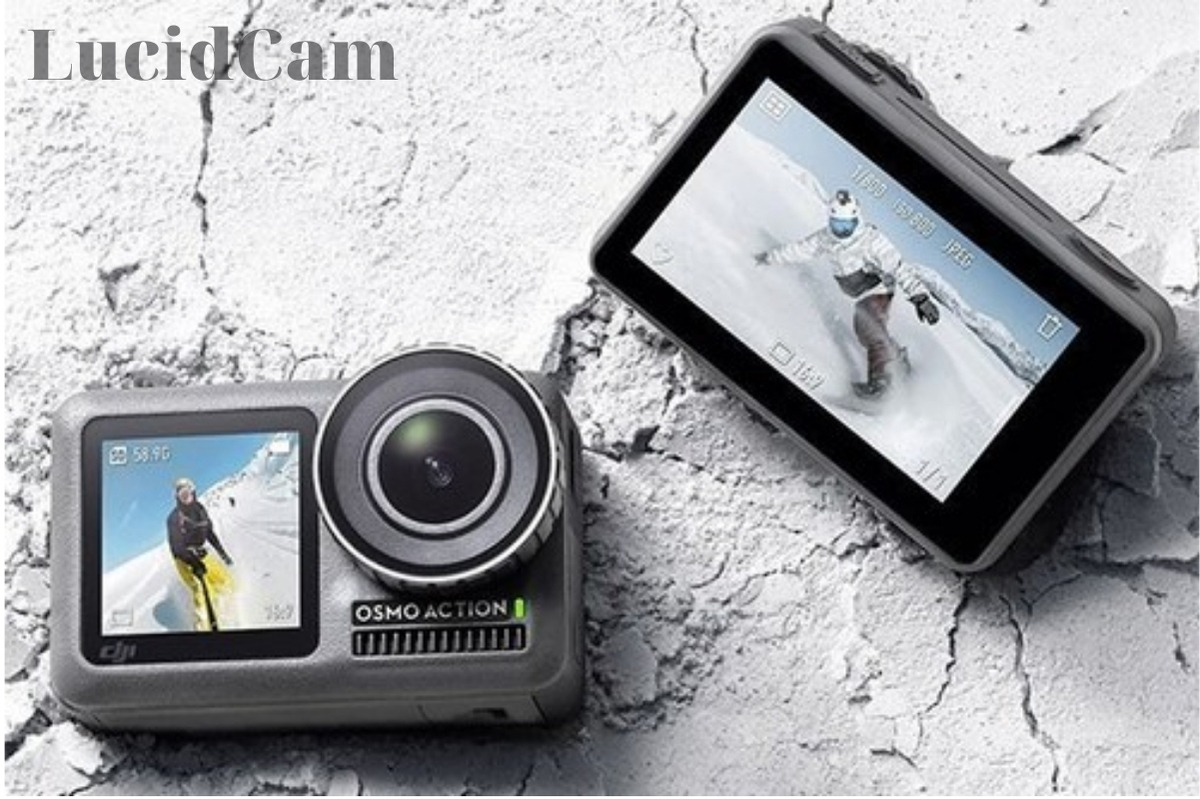 DJI’s first attempt to create a camera that is easy to use was a huge success. The dual-screen setup and user interface make it easy to use. Even if the manual isn’t in your language, you can learn the gesture-based navigation system in just a few minutes.

Swipe left to right in the main viewfinder, and you’ll reach the gallery. Swipe left-to-right, and you will be able to adjust the basic settings for any shooting mode. You can adjust the frame rate and resolution by swiping bottom to top. To access the settings panel, swipe from top to bottom.

This information is displayed on a large-format touchscreen at the back, which takes up almost all of the space. This ratio allows you to view the entire video frame in 16/9 aspects, without any letterboxing and black bars.

The screen at the DJI Osmo Action is what makes it more user-friendly than a GoPro. DJI equipped a color screen on the front of the Osmo Action, rather than just placing a small monochrome screen with limited information. This screen can be used as a viewfinder for taking selfies and videos. You can choose to either have heavy letterboxing or see the entire frame. Or, you can crop a section of the screen. It’s better than not being visible and hoping that the framing is OK.

You also have trio buttons that allow you to switch between touchscreen gestures. These are Power, Record/shutter, and Quick Switch (QS). The first two buttons are obvious, while the third is quick and easy to toggle between recording/capture modes. You can also choose the modes that you wish to be displayed in the QS menu. This means you won’t have to cycle through all the modes and can eliminate the ones you don’t need.

The Osmo Action has proven to be a reliable and solid performer in all our testing, with very few problems. The buttons and touchscreen are responsive. Voice actions are the only area we had trouble with. The camera did not respond to all of its pre-recorded commands more often than not.

The battery is good enough. Osmo action’s battery can capture up to 63 minutes. However, an action camera is best used to record short bursts rather than long segments. It’s hard to verify. You will need to have a large memory card to capture an hour of 4K video at 60fps.

Although we didn’t get the entire over-and-hour of capture we wanted, we can say that the DJI’s larger battery means that it appears to last noticeably longer than the Hero 7 Black 4K. That’s DJI’s benchmark score.

You don’t want to waste time setting up your camera or waiting for it to start. The DJI Osmo Action is able to start recording even when it’s powered off. Simply press the shutter button or use the voice command “start record” to get started.

The Osmo Action’s menu system can be accessed via the touchscreen at 2.25 inches. Swipe in from any four corners of the screen to access a different menu. We have few complaints about GoPro’s sleek UI. However, Osmo Action’s refined user experience puts it ahead of its competitors.

Earlier we mentioned a QuickSwitch button on the side of the DJI action cam. This button allows you to switch between HDR video, regular and custom modes without having to use the touchscreen. This is ideal if you’re wearing gloves that aren’t touchscreen-friendly.

One of the smartest features is custom modes, which essentially enables you to store profiles of settings and then quickly switch between them, sort of like a custom button on a DSLR. Meanwhile, the Quick Switch button comes in handy for switching shooting modes in underwater situations 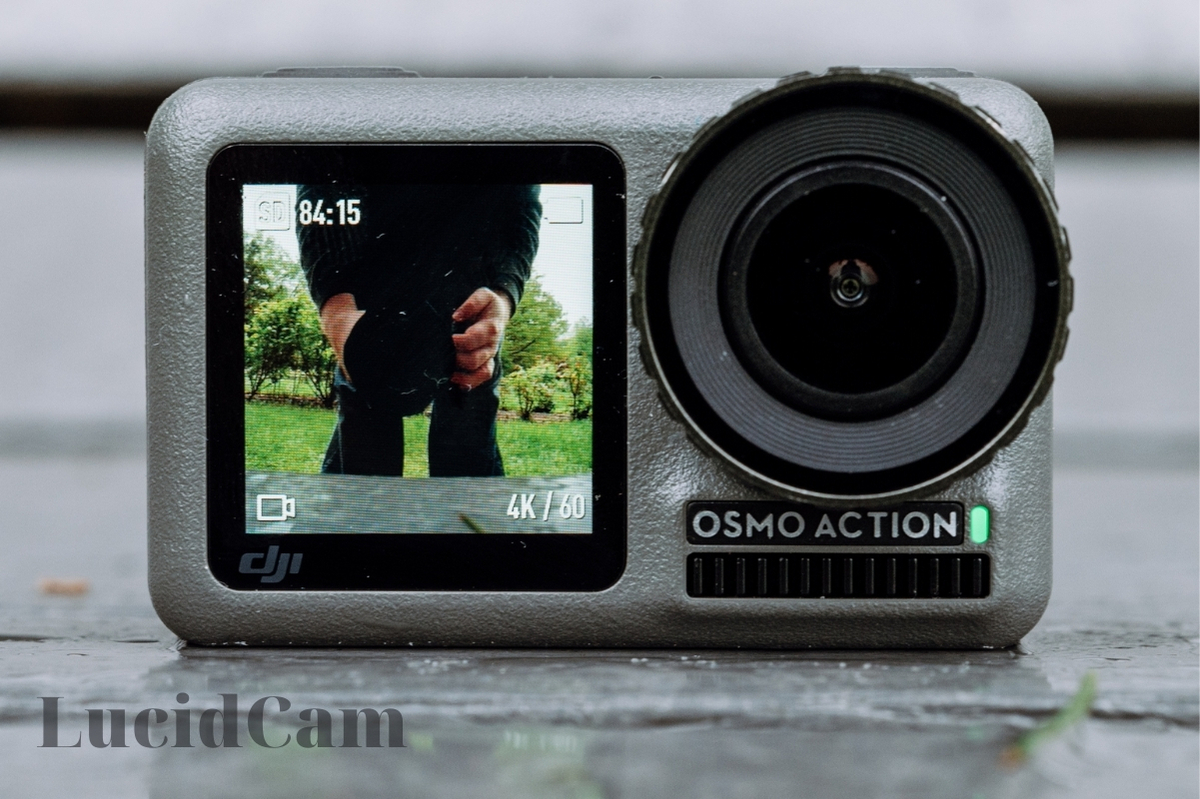 Stabilization is a key area of expertise for DJI. They all have world-class stabilization, whether it’s the Big Ronin S handheld drone gimbal for DSLRs or the Mavic drone series. These devices can make even the shakiest videos look smooth. It’s impossible to fit a 3-axis gimbal into such a small camera, so DJI used electronic stabilization and artificial intelligence (AI).

This feature is called “RockSteady.” It uses what we assume to be dark magic to make shaky videos smooth, almost like a gimbal. It eliminates the jittery shakes that come from walking or running with a handheld camera, and it also smoothens any panning or movement of the camera.

To get the best slow-motion effect and highest resolution, we set the Osmo Action to Full HD mode (8x) at 240 frames per second for all slow-motion recordings. It’s possible to get the timing just right and still look quite impressive. We have seen birds moving in slo-mo across a scene and long reeds waving in strong winds. It does look grainy and lacks detail compared to regular recordings, but this is normal at a lower resolution and a higher frame rate.

You can switch to still photos mode, and you will be fine as long as your subject is not too close and that you are in good light. You’ll get decent, colorful shots. These shots are not great, but they are good enough. This camera has trouble when the light levels drop below what you need to photograph. Fixed focus means that you cannot adjust the focus.

RockSteady is DJI’s electronic image stabilization. It’s gravity-defying and produces footage that looks as if it was shot on a Gimbal. RockSteady is even more effective than the Hero7, as it holds the footage together with a little better. However, RockSteady comes at a price.

When shooting at full resolution (4K 4:3) – RockSteady EIS is activated, there will be a delay of approximately half a second between real life and the viewfinder. This issue could be corrected with a software update and may not be harmful to some use-cases. This problem will affect any action footage that requires tracking a moving object.

The Osmo Action is not the best action camera with great apps. We had trouble connecting with the app on both iOS and Android. Only one in twenty attempts at pairing was successful.

Osmo Action features a dedicated slo-mo mode that produces slo-mo videos. This is a wonderful feature but could be improved. The maximum file size is currently 1080p 8x slow-motion, but it produces 30 fps. My videos are almost always mixed down to 24 frames per second. This means that I can get 10x slower motion for the same speed as 240 frames per second.

The DJI and the GoPro can do this by manually shooting 1080p240. After that, you can slow it down in Premiere or Final Cut 10x. However, it would be nice to have that option in the quick options. GoPro should seriously consider taking that feature. Currently, you can slow down your footage using a desktop or mobile software.

The DJI Osmo Action 4k is a great portable camera for anyone who wants to capture high-quality video with the convenience of an action camera. Whether you’re looking for something that can be mounted on your bike or helmet, this device has you covered. It also offers some nifty features like Time Lapse and Hyperlapse modes, so it might just be worth checking out if you need a new way to take videos with your phone!

We hope that after reading our review, you have found helpful information in order to find what’s right for your needs. Happy shopping!