The Akaso Ek7000 4k wifi sports action camera is a great camera for capturing your outdoor adventures. The camera is easy to use, and the image quality is excellent. The camera also has a built-in wifi feature that allows you to connect to the camera with your smartphone or tablet.

In this blog, we will share a complete Akaso Ek7000 4k Review with you. This review will provide information about the camera’s features, as well as suggestions to help you decide if this is the right camera for you. 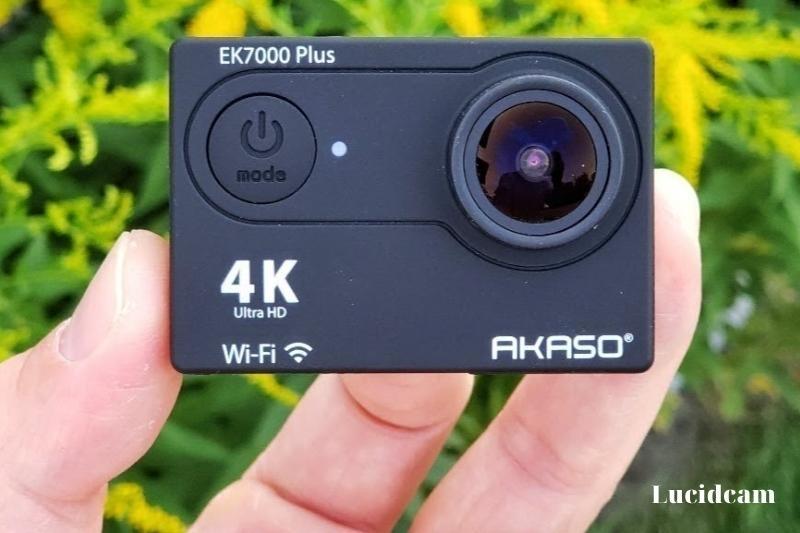 The design of the Akaso EK7000 is very generic. That word is used because the design of another camera (the Drograce WP350) I have tested has the same exact design with minor changes in the user interface. Capmark Xtreme I+ has a slightly modified version. The Akaso has a red light at the top that indicates power and slow blinks while recording, while the Drograce uses the same blue light. All of these cameras are designed by GoPro.

Each of these cameras has four buttons to control its functions. The shutter button at the top of the camera is used for taking pictures and for stopping recording. It can also be used as an “enter” button when browsing the settings.

The mode button is located on the front of your camera. It cycles between video and photo, burst time-lapse, settings, and video. It can also be used as a “back” button or a power button to turn on the camera.

A set of up-and-down buttons allows you to navigate through the settings. The gallery function will be opened when the camera is in video or photo modes. There are two options: one with photos and one with videos.

The camera’s back has a screen with touch capabilities. However, it looks similar to older GoPro models.

After recently purchasing a GoPro Hero 5 Black, the touch screen is intuitive. However, early GoPros had a similar interface and button layout to the Akaso’s. The waterproof housing is required by the camera, so I had to push down hard to make sure the button pressed the correct action.

The camera also comes with a wifi remote that can be activated in the settings. It seemed to be natively paired. The two-button remote can be used to start, stop and take still photos. The camera switches between video and camera modes when you press the alternate button.

These cameras are still waterproof, but they have a smaller price tag than the GoPro. I had to press down hard to make sure the button pressed my desired action.

Although Akaso’s menu structure is relatively simple, it is not as intuitive as the GoPro’s, which organizes settings around the edges in virtual buckets. I discovered that the Akaso’s menus had some options but no other options when I selected them.

It is not the easiest process to switch between resolutions when filming. The Akaso camera’s field of view can’t be adjusted like other budget cameras such as Drograce.

Both the GoPro and Sony action camera brands are highly regarded for their innovation and quality, so they come at a premium price of $200 to $400. The Akaso EK7000 is a good option for video editing, but it comes at a slightly lower price.

The video from the Akaso was generally good except for the motion that made it quite shakey. Although the gold sunset against the poolside really pops in the frame of the shot, even slowing down the camera caused the tiles to blur in sharpness.

Akaso’s camera does not have image stabilization, which is a feature that can be found on GoPros. This means that any bump in the road or shake in the user’s hands will be reflected in the footage.

Some of the footage that I took while riding my bike was difficult to watch due to its shaking. Although there are video-editing software and accessories gimbals available that can assist with this, it is likely that a gimbal will cost three times the price of the $70 action camera.

The Akaso can shoot 4K at 25 frames per second (fps), compared to the Drograce’s 30 fps. However, I recommend that you shoot in 1080P or720P at 60 FPS. This resolution is not available because the Akaso or Drograce models do not have enough horsepower to process large files. Despite the fact that these cameras are made of plastic, I did not notice it. 4K video can get quite warm.

Finally, even though the plastic housing appeared clean, I discovered that the lens was able to pick up fingerprints easily. There is a white haze in more than one video sample. This could be due to the oil my fingers have left on the plastic. To limit the surface through which an image can pass, use the frame mount if you don’t plan to jump in a body.

The Akaso’s waterproof housing made it sound muted and muddled even when the user was speaking directly to the camera. The frame-only accessory, which clips around the camera, is available if you don’t plan on getting it wet.

The frame accessory attaches to accessories using two 1/4-inch threaded tripod screws (one on each side), while the waterproof housing uses GoPro-styled interwoven plastic tabs that are secured with a screw. This shouldn’t be a problem as there is a conversion accessory that can attach to either mount style. It just adds another accessory.

The audio quality was improved by taking the camera out from the hard case, but the camera also became more susceptible to wind noise. 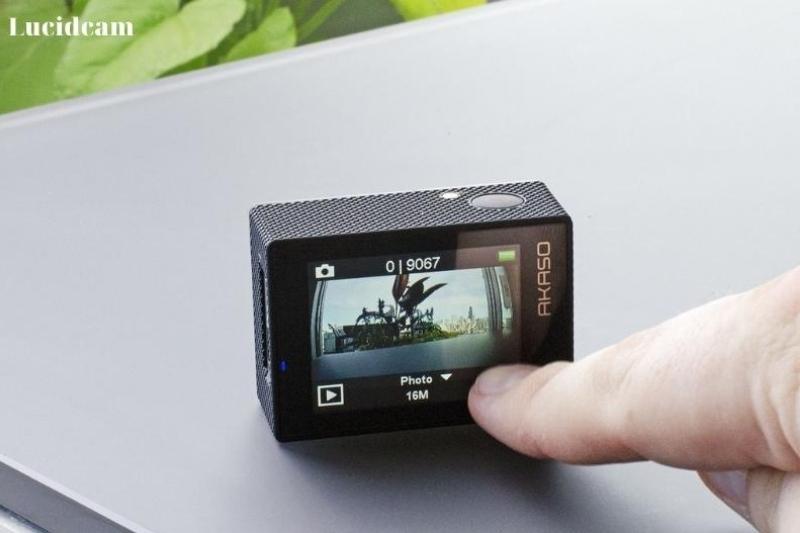 The AKASO EP7000 can take photos measuring up to 12MP and measuring 4608×2592 pixels. These photos are in the 16/9 aspect ratio. This is the most common aspect ratio for video recording. Traditional aspect ratios for stills are 3:2 and 4:3. The file can be reduced to 4MP. You can save the files as JPGs (no RAW).

The standard Wide mode has the narrowest field of view. It isn’t as wide as GoPros. This is a side-by-side example. One-shot was taken with the GoPro Hero6 Black, the other with the AKASO EK7000.

Burst mode takes a fast sequence of still images. This mode is useful when fast-moving action is required to capture that fleeting moment. 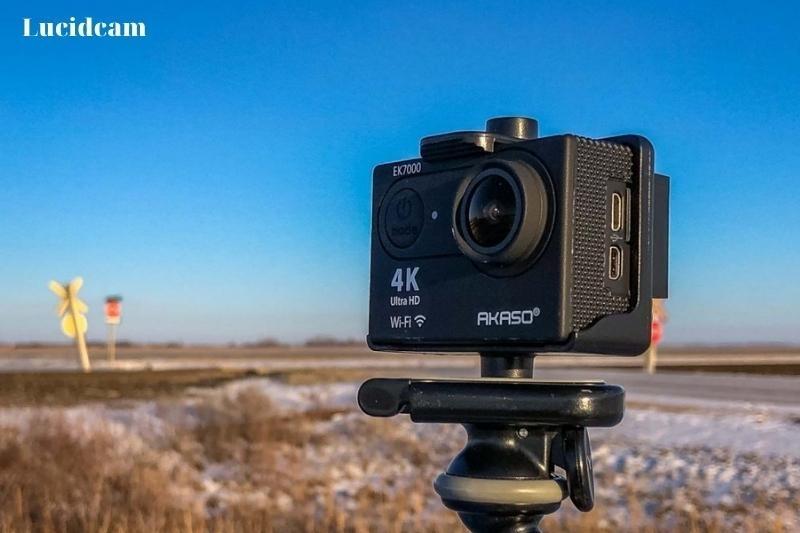 You can take a series of JPG photos in timelapse mode. The timelapse video option does not compile the video from the camera. You’ll need to download the sequence of images and use time-lapse software to convert them into a video file.

Although the AKASO EK7000 follows this trend, I was actually quite surprised at how well it performed. I did some tests and found that at 4K25, 1080p30, and 00:00, the battery lasts about 1 hour 40 minutes. This is slightly more than some of its rivals for the 4K setting. It’s comparable to competitors at 1080p30, which places less demand on the battery.

You can maximize your battery life by turning off the wifi, avoiding the mobile app, and minimizing the amount of back-screen viewing.

Also, lithium batteries are not suited for extreme cold or extremely warm temperatures. This is not a problem with this camera; it applies to all lithium batteries. If you find yourself filming in winter and not getting enough use from your battery, this could be the reason. To help, you can keep the battery warmer. A jacket pocket inside can work well, but don’t put it in direct contact with a flame, oven, or microwave. Lithium batteries can burn extremely intensely when they are ignited. 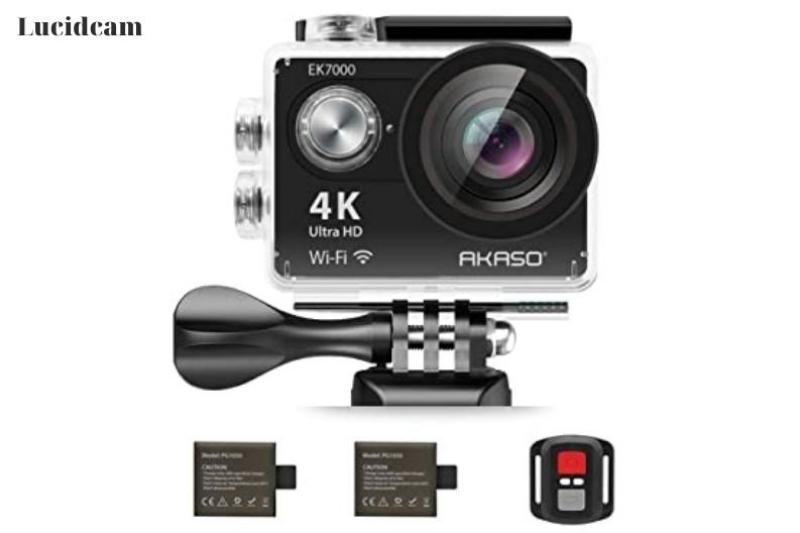 You’ll be able to quickly pick up if you have used a GoPro before. It’s actually quite simple because there are more buttons. This makes it easier to navigate through the menu screens.

It’s very simple. The buttons for up and down arrows are located on the side of your camera. The mode button at the front of your camera switches the mode. The shutter button allows you to make a selection.

Although the menu is quite simple, it does the job. Scroll down to adjust the settings or modes.

The front screen of the GoPro is not LCD, unlike many other GoPros. The large screen at the back of the camera is used to view live, playback, and menu operation. It is not a touch-screen.

The iSmart DV mobile app is compatible with the camera and allows you to connect to it. It is available for Android and IOS.

Although it has a similar interface to the GoPro app’s, the interface is not as polished. A preview of the view is available. You can also start, stop and take photos. You can also adjust the resolutions, shooting modes and view footage and photos.

Although it’s not perfect, it did work well most of the time.

To use the mobile app, you must enable wifi on your camera. To toggle wifi on or off, use one of the shooting modes. 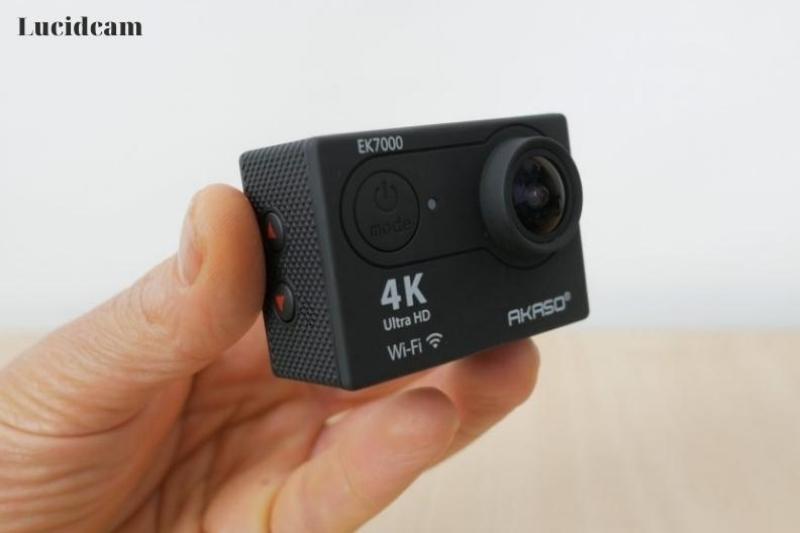 A small, 2.4GHz wireless remote control is also included with the camera. It is waterproof but splashproof. There are two strap holes on the sides. The velcro wrist strap can be worn as a watch or wrapped around a selfie stick.

It is much simpler than the typical GoPro remote. There are two buttons on the remote: one to take a picture and one to start and stop the video. Two indicator lights provide feedback. It also emits a beep sound.

It was simple, which I liked. Although I love the functionality of GoPro remotes, I don’t enjoy having to pair them every time. The remote that comes with the Akaso EK7000 doesn’t require pairing. It just works. The camera can be used in wifi mode without even needing to be turned on.

Here are some ways to use it. 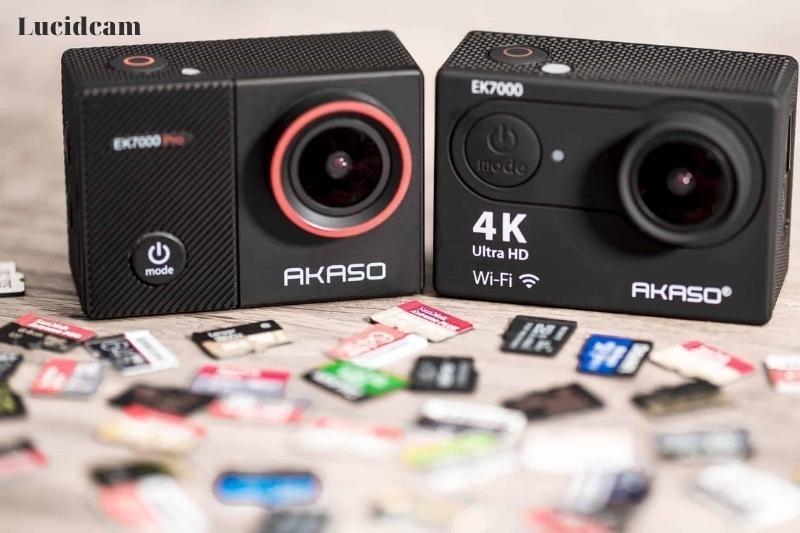 While I have detailed recommendations for EK7000 memory cards, here are some quick suggestions:

The SD card recommendations are not made in the instruction manual. Although the instruction manual says it should be at most a Class 10, in reality, most SD cards will not support high-bitrate recording at 4K (60 Mbps). It’s a good idea to get at least a U1 card and, if possible, a V30 or U3 card. The card claims that it can work with cards up to 32GB. However, I have tested it with a 128GB microSDXC and had no problems.

It can be charged using a micro-USB cable. It includes a micro-USB Cable. Although it doesn’t include an AC wall adapter for use with the device, you can use any USB adapter or external power brick that you have. It is not compatible with the latest USB-C PD fast charging options.

You can also connect to HDMI. It was difficult to get it working, but I admit that I haven’t spent too much time playing with it.

In short, Akaso Ek7000 4k wifi sports action camera is a great device for capturing your outdoor adventures. The camera produces excellent quality video and still images, and the built-in wifi makes it easy to share your footage with friends and family. The camera is also very affordable, making it a great option for budget-minded shoppers.